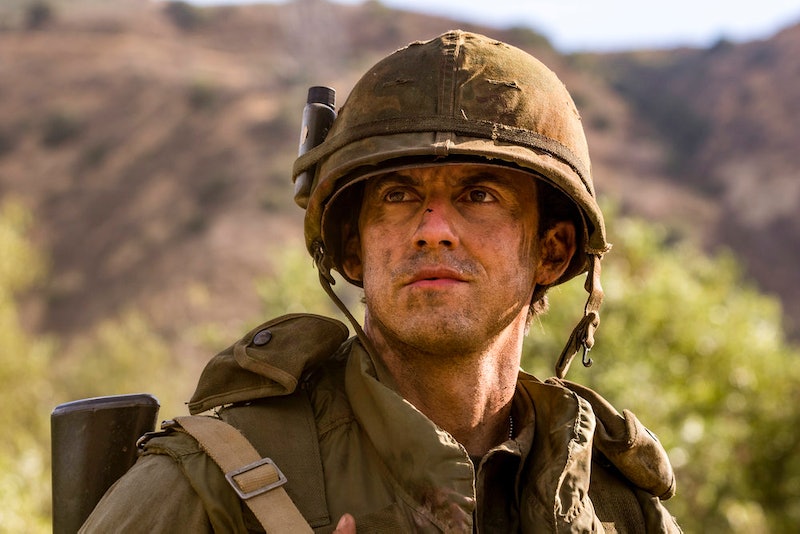 Jack Pearson has always been a bit of a mystery on This Is Us, but during last Tuesday's episode, titled "Toby," fans learned a new detail about his life that has them questioning everything they thought they knew about his past — particularly about his time in Vietnam and the mystery woman he seemed to grow close to back then. Their surprising connection may have some people wondering: does Jack have another child on This Is Us that we have yet to know about? His time in Vietnam is proving to be even more complicated than any of us ever realized.

But first let's back up a minute and think about what's led some to this potential conclusion in the first place. Tuesday's episode ended with Jack's old wartime buddy Mr. Robinson dropping off a stack of letters he'd received from Jack during the remainder of his service in Vietnam. One letter included a photo that showed Jack standing alongside a woman from one of the Vietnamese villages, who was wearing the very necklace Jack gave to Kevin after his football injury in high school.

At the time, Jack had told his son that "someone very special" had given it to him in Vietnam during a very low point in his life, though he didn't specify who this person was. Originally, some may have assumed it had belonged to his brother, but we now know that was not the case.

Suspicions about Jack's past have been around ever since the Season 2 finale when a flash-forward scene found Kevin Vietnam-bound in the hopes of getting some answers about his father's past. Some fans took this to mean that his brother Nicky was alive, however, others theorized that Jack could've fathered a child with a woman prior to meeting Rebecca. Perhaps this is who Kevin is going to see or even a long lost sibling he never knew existed.

Given that this show loves throwing curveballs our way, it is possible that Jack could have another child out there, however, considering everything we know about Jack's character, it'd be hard to believe that he knew about the child. He's proven to be such a wonderful father and would've undoubtedly wanted to be apart of his kid's life. So maybe he was discharged before the woman was able to tell him she was pregnant. Then again, that's assuming that the romance between these two characters was romantic.

During a recent interview with Entertainment Weekly, This Is Us executive producer Elizabeth Berger called their connection "complex" and teased that "it is safe to say that it is not going to be the most typical relationship." That doesn't necessarily mean things got intimate between them, or if it did, that it resulted in a child. That being said, when asked directly about the theory that there's another Pearson child out there, Berger admitted that the storyline is definitely open to interpretation.

"Our mystery woman and what transpired between her and Jack in Vietnam is currently wide open for interpretation," she told EW. I can say that in the course of the season we will learn exactly what happened between Jack and Nicky in Vietnam, and also learn more about this woman. As for whether there could be another Pearson out there? You’ll have to wait and see."

The point is, there are a lot of different ways this could play out. They may have bonded over mutual grief that they suffered during the war. Maybe it led to a romance. Maybe it didn't. But if Jack really does have another child out there, let's hope Kevin is able to connect with him or her and uncover some more layers to his beloved father's history.

More like this
Who’s The Richest 'Grey’s Anatomy' Star? See The Net Worth Of Each Cast Member
By Hugh McIntyre
'The White Lotus' Season 2 Trailer Teases Multiple Affairs & Another Dead Body
By Bustle Editors
Dan Levy Appears In The Latest Teaser For The Weeknd's HBO Series, 'The Idol'
By Jake Viswanath
9 Movies & TV Shows That Prove Stanley Tucci Elevates Everything He’s In
By Jake Viswanath and Radhika Menon
Get Even More From Bustle — Sign Up For The Newsletter