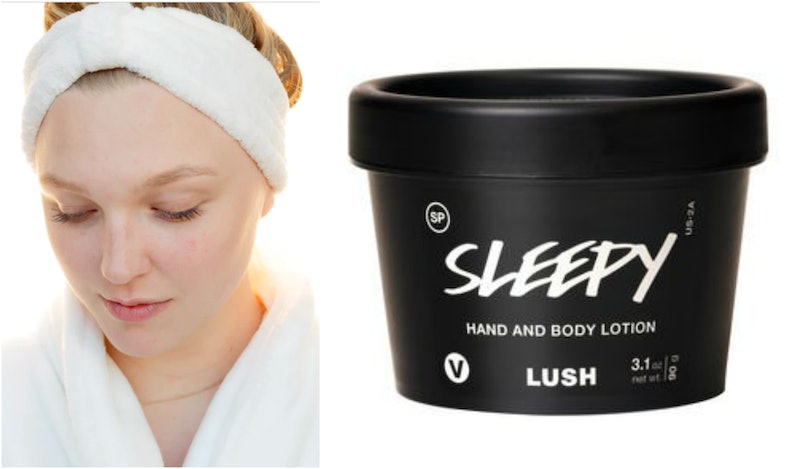 My nightly routine, although imperfect, is sacred to me. I wrap up each evening by watching a murder mystery and then performing my skin care regimen, afterwards climbing into bed with a book that I eventually put down to spend anywhere from 15 to 325 minutes scrolling through memes on my phone. However, even with such a consistent routine, I sometimes find it hard to sleep.

This could be due to your basic, everyday insomnia, or the blinding blue light from my phone, or perhaps the fact that I am usually watching a show called Murder Files: It Could Happen To You or Killer Dentists or The Serial Killer Hiding In Your Closet Right Now. In any case, not being able to fall asleep is frustrating, so when I kept seeing LUSH's Sleepy Body Lotion all over my timeline, I was intrigued. Most people know that lavender is supposed to help you fall asleep, but everyone was talking about this particular lavender-scented lotion like it was going to change my whole damn life. Like most internet raved-about things that claim to transform my whole life, I reluctantly decided to give it a whirl.

My skepticism about the lotion had nothing to do with the brand itself (I love LUSH with a deep, bathbomb-fueled passion), and more to do with the fact that I am skeptical of all "magical" beauty products. That cream that makes a zit disappear in one hour, or the moisturizer that FaceTunes your skin overnight — those types of products never work quite the way they're advertised. Plus, I've tried lavender essential oils. I've sprayed relaxing, supposedly slumber-inducing potions on my pillow. And while all of it feels soothing, ultimately it's more like lighting a nice candle than it is like taking an Ambien. But with 5 stars on the LUSH website, and 197 reviews that mostly say things like, "This is the best substance I've ever smelled. I would literally roll in this stuff," I had to give Sleepy a go myself.

I first used the lotion on a regular week night, after the type of long day that leaves you somehow completely unable to turn off your brain. I was tired, but couldn't get myself to relax — a common occurrence for me, and the perfect opportunity to put Sleepy to the test.

While lotion in a jar is never my favorite thing (I hate using my hand as a scooper), the warm, comforting smell of lavender and tonka hits you as soon as you take off the lid, and it's intoxicating. Let's be clear: This is not a subtle smell, but that's kinda the point. I worked the lotion into my hands, arms, and legs, paying extra attention to my elbows and knees. The formula of the lotion itself features ingredients like cocoa butter, almond oil, and lavender oil, staying true to LUSH's natural roots.

While the lotion doesn't offer the instant absorption that I've come to want in moisturizing products, I forgot about any residual greasiness almost instantly. I laid down in bed, took a couple breaths, and I was asleep in less than five minutes. While minutes before I couldn't stop my mind from racing about serial killers and work deadlines, after I used the lotion, I couldn't even keep my eyes open.

Granted, I realized that there could be some psychological aspect to all of this — that me thinking that the lotion might put me instantly asleep had some part in it, or I just happened to use it when I was more tired than I realized. I knew this, so I tried Sleepy out again a couple nights later. And, again, I fell right asleep. I've used the lotion four or five times now, and as skeptical as I was, I've noticed a definite difference when it comes to how quickly I can fall asleep if I don't use it.

The lotion itself is rich and adds noticeable moisture to your skin, but I won't say I won't say it's the most moisturizing or skin-changing lotion I've ever used. It's definitely the only lotion that's ever put me to sleep, though. So, for that reason, it's sticking around.

I suggest putting Sleepy on your arms, hands, feet, and legs about 10 minutes or so before you hop into bed to give it a chance to soak in and absorb — maybe before you brush your teeth. As for me and my sacred nightly routine, the little purple jar has now officially snuck its way into my regimen right after murder show re-runs and right before I wash my face. By the time I make it to my bed, I'm already drowsy. I'm still not calling it magic just yet — but sometimes it feels like it.