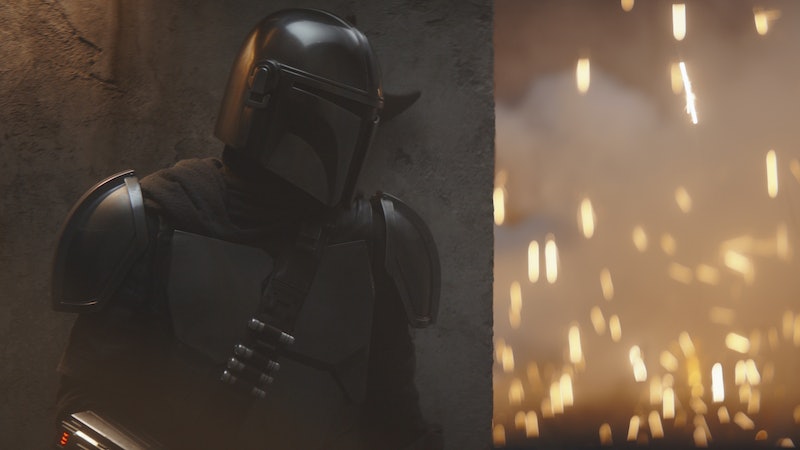 Baby Yoda might be the cutest Mandalorian character, but the most mysterious character award goes to Mando himself. Really, while fans are busy ooh-ing and ahh-ing every time little Yoda coos or sips his bone broth, they're forgetting that that there's so much they don't know about Mando yet. Including what he looks like. That's because he's not supposed to take his helmet off around people. But given how much emphasis has been put on the fact that he can't take off his helmet, it's almost guaranteed that Mando will take his helmet off on The Mandalorian at some point. Why cast Pedro Pascal if you're never going to show his face?

Actuall, Mando has already taken his helmet off on the show, just not onscreen. In Episode 4 "Sanctuary," Mando and Baby Yoda found themselves on the planet of Sorgan in the hopes of keeping a low profile. Obviously, that didn't work out as planned. Mando ended up helping a nearby village protect their land from the Klatoonians and an AT-ST. While there, Mando became friendly with a woman named Omera, who brought him something to eat. Once she left his hut, he took off his helmet in order to eat and stared out the window at the kids playing outside. No one, not fans or the villagers, caught a glimpse of his face during that time, but that doesn't mean viewers won't get to have a closer peak under the hood, so to speak, at some point down the line.

During an interview with Extra TV back in November, the Mandalorian himself, Pedro Pascal, hinted that Mando will take his helmet off, for the world to see, eventually. "They only saw 39 minutes," Pascal stated, when told how many were disappointed not see his face during the first episode. "Be patient." That certainly seems to imply that it'll happen. It's just a question of when.

When speaking with Omera, Mando explained why it's so important for him to not remove his helmet in front of people. He wasn't born as a Mandalorian. They took him after he became an orphan and his gratitude for their kindness inspired him to follow in their footsteps. No one has seen his face since he was a young boy and while he wouldn't be killed if he were to remove the helmet, he would have to forfeit his Mandalorian title and never put the armor back on again.

Mando already had part of his identity robbed from him when he became an orphan, so it makes since that he's so protective of his new identity as a Mandalorian. It allows him to know who he is and gives him a sense of purpose. So if he ever does remove that helmet in front of others, it'll have to be for a very important cause.

More like this
Netflix Shut Down 'Bridgerton' S3 Rumours About A “Very Dark” Storyline
By Bustle
Everything To Know About 'RHONY' Season 14
By Jake Viswanath, Alyssa Lapid and Brad Witter
'Friends' Star Maggie Wheeler Offers Support To Matthew Perry After Reading His Memoir
By Alyssa Lapid
Anne Hathaway Shared A "Thrilling" 'Princess Diaries 3' Update
By Darshita Goyal
Get Even More From Bustle — Sign Up For The Newsletter
From hair trends to relationship advice, our daily newsletter has everything you need to sound like a person who’s on TikTok, even if you aren’t.