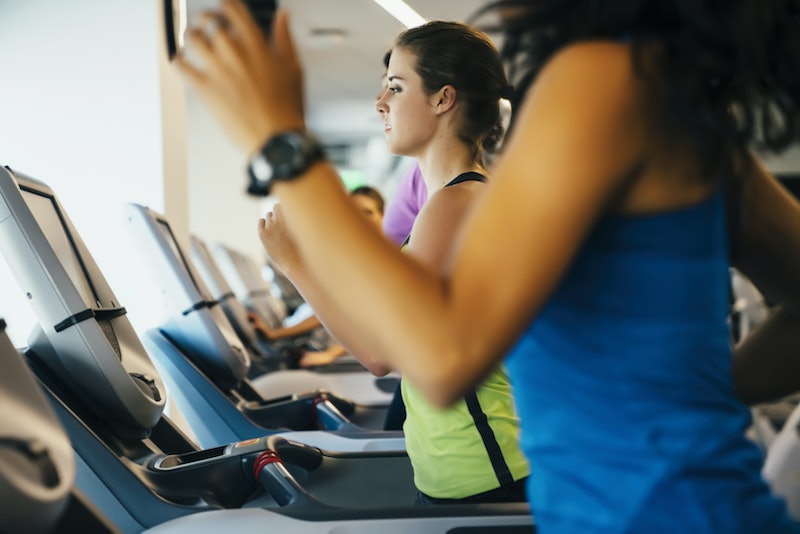 Calorie counts are everywhere, from the menus at your favorite lunch spot to your fitness tracker. However, these counters don't make a fundamental point about calories clear; measuring the calories you're "burning" when you work out really doesn't mean anything.

"Approximation is the name of the game" when it comes to calories, Caleb Backe, a personal trainer at Maple Holistics tells Bustle, and that matters, whether you're tracking your workouts or grocery shopping.

The primary way many of us have learned about calories is in the context of weight-loss. The theory goes, our energy levels are calculated as a ratio of calories consumed to calories burned. If there's a deficit, one would lose weight. But not only does this theory perpetuate the incorrect notion that weight-loss is the end goal of exercise, it also doesn't add up, scientifically. It turns out that, like the number on the scale, counting calories is also irrelevant to our health, and detrimental to our relationship with our bodies.

Some experts don't believe that tracking calories in versus calories out is a good way to monitor your health at all, noting that many other factors, including the body's metabolic rate and insulin level, aren't being tracked as part of the equation.

“Finding an accurate caloric burn from a workout is really, really tough. Possibly impossible," Caley Crawford, the director of education at Row House tells Bustle. The reason? The tech just isn't able to keep up.

"Most of the caloric counts on machines in the gym are just calculations based on an average body weight and height, so it’s not going to be accurate for all users, if anyone at all," Crawford says. And even wearable exercise trackers aren't likely to get it right: A 2017 study published in the Journal of Personalized Medicine found that out of seven prominent wearables, literally none could accurately track energy expenditure, aka calories burned.

If you do want to keep track of your workouts in a quantifiable way, experts advocate looking at metrics that relate to how much you're actually moving your body.

"For me, I find that if I focus my efforts on performance-based metrics as opposed to calorie counting, I tend to be in a healthier mental state as well as see more progress in achieving my goals," Crawford says. "It’s also more fun than counting calories. If you can turn your workouts into a game or challenge, you may start to actually enjoy it!” That means counting reps, steps, beats, or anything else that's related to how you're actually moving, rather than calorie-burning estimates that likely aren't anywhere near the truth.

Ultimately, fitness and health are about far more than burning a certain amount of calories. They're about strengthening your body, and building up how you feel in it. And your body's energy needs are a lot more complex than simply calories on a label, or on the side of a treadmill. So forget that calories burned number: It simply doesn't fit into the bigger picture.