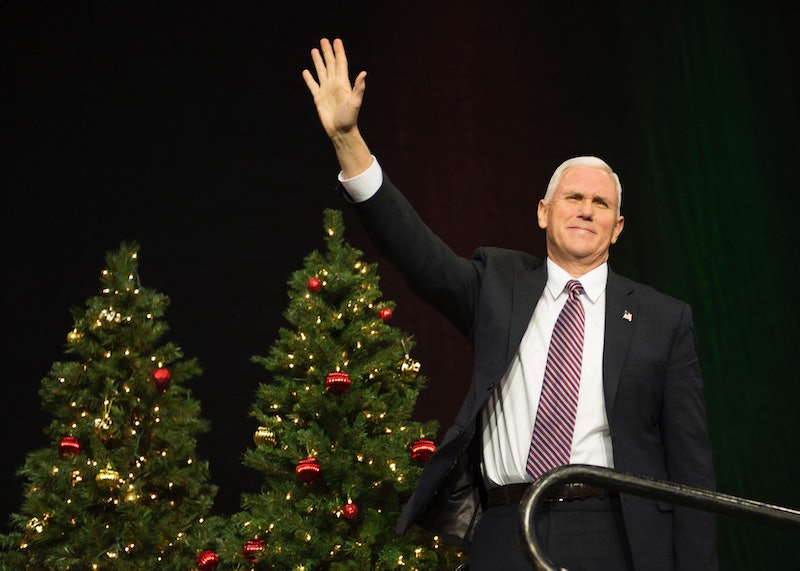 The lack of musical entertainment at the presidential inauguration may be a cause for concern, but there will be at least two headliners giving oaths on Inauguration Day. President-elect Donald Trump's swearing in gets the most attention — as one would think — leading up to his big day. Trump will be taking over the nukes afterwards and thus deserves the focus. But he will not be alone Jan. 20 on the Capitol's West Front overlooking the National Mall. Have you wondered, does Mike Pence take an oath at the inauguration? Well, the vice president actually will be sworn in first.

The transition of power, as noted in the 20th Amendment of the Constitution, is to take place at noon on Jan. 20, and the presidential oath is laid out in Article 2, Section 1. But it doesn't say much about how Inauguration Day is supposed to go, and the vice presidential oath isn't mentioned. But, since the office of vice president was created in 1789, there has been a swearing in — and that is to continue with Mike Pence's taking of the oath this go around.

Since the oath is not spelled out verbatim in the Constitution, it has been changed around a few times by Congress. The current version, decided in 1884, is the same one that is used on senators, representatives, and other government officials:

I do solemnly swear (or affirm) that I will support and defend the Constitution of the United States against all enemies, foreign and domestic; that I will bear true faith and allegiance to the same; that I take this obligation freely, without any mental reservation or purpose of evasion; and that I will well and faithfully discharge the duties of the office on which I am about to enter: So help me God.

Another difference from the president's swearing-in is who gives the oath. For Trump, it will be the Chief Justice of the Supreme Court John Roberts. But when administering the oath of vice president, you see more flexibility. Since World War II, friends and family have often administered the oath. No word yet on who Pence will choose. Joe Biden was first sworn in by Justice Paul Stevens in 2009. Then the second time he opted for Justice Sonia Sotomayor.

This is not Pence's first time to swear an oath of office. When he became Indiana's 50th governor in 2013, he was sworn in by the state supreme court's chief justice in Indianapolis. That was surely a smaller affair, though. Even with many celebrities seemingly boycotting the inauguration in Washington, D.C., it will still be rather stately.

If the Rockettes don't work out for entertainment, maybe Trump can put in a good word and Kanye will swear Pence in. That would solve two problems at once.