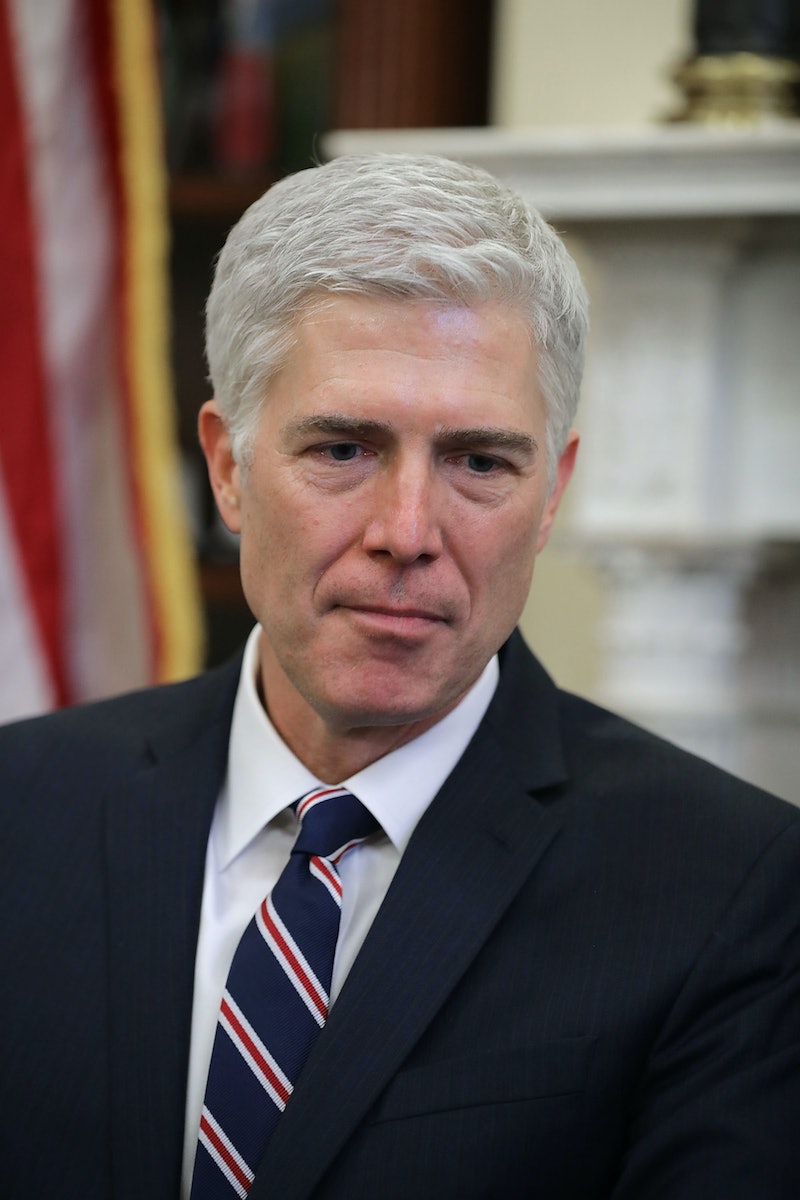 Abortion has been a hot-button issue in the U.S. for what feels like forever, so it makes sense that a certain question would be weighing on everyone's mind when it comes to Donald Trump's Supreme Court nominee. Does Neil Gorsuch want to overturn Roe v. Wade, the landmark case requiring that women have access to abortion in the U.S.? Although he has not heard a case specifically dealing with Roe v. Wade as a precedent, several things suggest that Gorsuch would side with a ruling that overturned it.

First of all, he's taken multiple opportunities to rule against women's healthcare, instead siding with religious believers and their right to impose their views on others. In both Hobby Lobby Stores v. Sebelius and Little Sisters of the Poor Home for the Aged v. Burwell, Gorsuch wrote opinions favoring the organizations' religious freedom over their employees' right to health coverage that included birth control. Gorsuch actually decided that the Hobby Lobby corporation and the Little Sisters non-profit were entities that could hold religious beliefs, and that their religious beliefs outweighed those of their employees. To add insult to injury, he did this based on the erroneous belief that birth control can amount to "drugs or devices that can have the effect of destroying a fertilized human egg."

I certainly don't need to tell you that that's not how birth control works — but Gorsuch could definitely stand to hear it. It does say something about his stance on the issue, though, and more broadly about his stance on the "inviolability" of human life. He stood firmly behind this stance in his book, The Future of Assisted Suicide and Euthanasia, in which he argues that the practice should never be legal. "All human beings are intrinsically valuable,” he says, “and the intentional taking of human life by private persons is always wrong."

It's easy to jump from this to the assumption that he would seek to overturn Roe, especially when you take into account the fact that Donald Trump campaigned heavily on the promise to nominate a pro-life judge. Many people who were otherwise turned off by Trump chose to vote for him for this reason, so it follows to reason that Trump would have at least done something to appeal to those sorts of people. I know, I know — Trump hasn't exactly followed expectations in other realms. But still, there's at least a possibility that Trump and his team, in their meetings with the potential nominees, would have brought up this issue and ruled out any contender who did not agree with them on it. More simply put: Trump could know something that we don't know.

Perhaps most disappointing for supporters of a woman's right to choose is a look at the pro-life stance of the man whose shoes Gorsuch is now nominated to fill: deceased Justice Antonin Scalia. Scalia was against Roe based on his idea that the Constitution did not specifically allow for this particular right — and Gorsuch is said to be one of the most Scalia-like of any potential replacement that Trump was considering.

Summing it all up, while there could still certainly be surprises, it looks like Gorsuch would pose a threat to a woman's right to choose if he were to join the country's highest court.