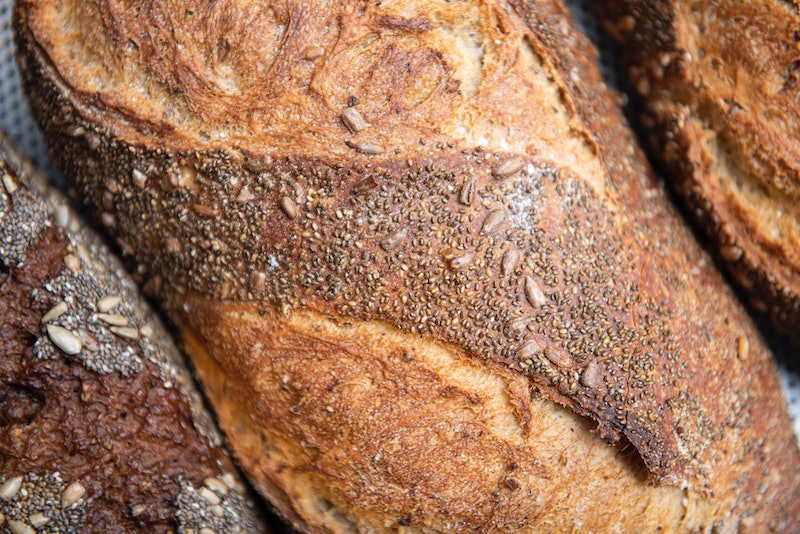 Sourdough bread, which is made using a fermented starter instead of fresh yeast, is renowned for its delicious, funky taste. Sourdough also has a reputation as a gut-healthy food thanks to that fermentation process. A functioning gut with a flourishing microbiome is crucial for many systems in the body to operate well, and if a particularly kind of bread can help you get there, well, toast me up a slice of that. But experts tell Bustle that while sourdough may be better for the gut than standard supermarket white bread, it's not quite a wonder food.

If you absolutely love bread, gastroenterologist Dr. Will Bulsiewicz M.D. tells Bustle that sourdough is the best option for your gut health. "Sourdough is a better form of white bread," he says. "The fermentation process reduces the gluten content and enhances the bioavailability of nutrients in the flour." Studies have shown that the fermenting process in sourdough releases more fiber, which can in turn help gut health, and change the microbiota of the gut by encouraging the growth of helpful bacteria. Stephanie Papadakis, a nutritional consultant and founder of Gut Of Integrity, tells Bustle that fermentation has other benefits, too: it gives flavor without the necessity of added sweeteners or fillers, which can also be bad for gut health.

One of the main problems with sourdough when it comes to gut health, though, is its refined grain content. "The average American eats 120 pounds of grains per year, most of which are highly refined to strip away the fiber," Bulsiewicz tells Bustle. If you eat a lot of white sourdough, the refined flour content might damage your gut, he says; refined carbohydrates like white flour are rapidly absorbed into the small intestine rather than slowly digested. "The result is a dramatic loss of gut microbial diversity and the rise of inflammatory bacteria that love simple carbohydrates," Bulziewicz says.

Sourdough doesn't carry the same gut benefits as other fermented foods. "Though fermented with the probiotic culture lactobacillus — the same culture that ferments sauerkraut, kimchi, kombucha, and pickles — sourdough doesn’t contain probiotics, as they are burned off in the baking process," Papadakis tells Bustle. Baking does create lactic acid, which helps break down sourdough's phytic acid content — and that helps the gut, because phytic acid can prevent nutrient absorption.

If you'd like to pick the best sourdough for your gut, research says that sourdough with whole grains is better for gut health than the kind made with white flour. Lovers of rye bread should reach for sourdough, too; research published in Nature in 2018 found that rye sourdough and wholemeal sourdough both contained a wide range of gut-healthy substances like branched-chain amino acids after the fermentation process, but that rye bread had a larger amount.

It's worth noting that there's a lot of individual difference in our microbiomes, and that people don't react to bread flours in the same way. A small study of 20 people published in Cell Metabolism in 2017 found that, for exactly half of the people in the study, artisanal wholemeal sourdough showed more positive effects on their microbiome — but for the other people, white supermarket bread had the best effects on their guts. Researchers are still understanding why this is, but it's important to remember that sourdough and fermented foods might not produce the same effects in everybody.

Sourdough, like all foods, can't be entirely classified as healthy or unhealthy for your gut; a lot depends on your own microbiome and other factors. If you love a little bread in your diet, though, wholemeal sourdough might be a good option for your gut in moderation — with or without avocado on top.