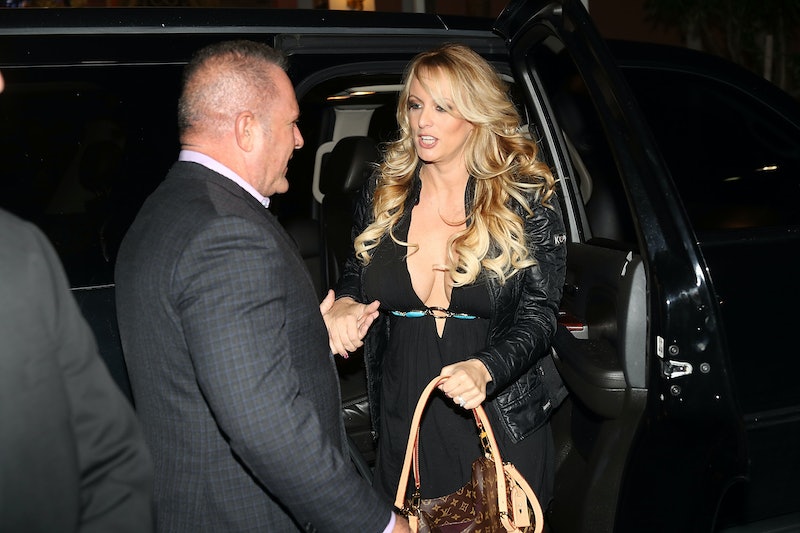 Of all the questions left over from Sunday night's 60 Minutes interview with an adult film actress who claims to have had an affair with Donald Trump over a decade ago, one in particular is vexing viewers. Though the alleged scandal is laden with many uncertainties, many are curious: Does actress Stormy Daniels have private photos of Trump? Neither Daniels nor her lawyer, Michael Avenatti, have directly said that they do, but there have been some hints, and neither have offered concrete answers.

The alleged affair between Trump and Daniels, whose legal name is Stephanie Clifford, took place between 2006 and 2007. Trump has never addressed the allegations in public, though his lawyer, Michael Cohen, has repeatedly denied them on Trump's behalf.

During her much-anticipated 60 Minutes episode, Daniels said that she could not answer whether or not she had turned over all "video images, still images, email messages, and text messages," she had related Trump. That she do so was reportedly part of a nondisclosure agreement (NDA) she signed with Trump's lawyer in the weeks leading up to the 2016 presidential election, which also stipulated that she never discuss the alleged affair in public.

Anderson Cooper, who interviewed her for the 60 Minutes segment, interrogated whether she had fully complied with the order to hand over any digital footprints she might have had that related to the alleged affair. Specifically, he asked Daniels directly if she possessed any "text messages or other items" related to the president.

"My attorney has recommended that I don't discuss those things," Daniels responded. Her lawyer, Avenatti, offered a similar response when pressed on the issue.

"You seem to be saying that she has some sort of text message, or video, or— or photographs," Cooper said. "Or you could just be bluffing."

Avenatti's response was similarly cryptic. "You should ask some of the other people in my career when they've bet on me bluffing," he said.

The first time Daniels' camp appeared to suggest that they might have some type of damning evidence related to the alleged affair was in a tweet that Avenatti sent out on March 22. The tweet included a photo of a nondescript compact disc, and was captioned, "If 'a picture is worth a thousand words,' how many words is this worth?????" It also included the hashtags "#60minutes" and "#pleasedenyit."

Neither Avenatti or Daniels have described what might be on the disc shown in the photo, and much of the conversation around its contents has largely been based on speculation. It's also not entirely clear how the the disc could play into an ongoing legal battle to relinquish Daniels from her NDA. Currently, she is suing Trump, claiming that the legal agreement was invalid because Trump, himself, never signed. Instead, only Cohen reportedly did.

Cohen has argued that the NDA it is legally in effect the way it is. He is so sure of this that he is leading a separate case against Daniels, suing the actress for $20 million in damages for allegedly violating the agreement 20 different times.

Cohen has also admit to personally paying Daniels $130,000 as part of the bargain for her silence, which he claims Trump did not know about. But if that was the case, Daniels' lawyer has argued, then why sue her for damages?

"How can President Donald Trump seek $20 million in damages against my client based on an agreement that he and Mr. Cohen claim Mr. Trump never was a party to and knew nothing about?" Avenatti tweeted on March 16.

The conflicts between Daniels and Trump's legal team are numbered and complex, and much of the discourse has relied heavily on the hypothetical. What evidence either side actually has may not be made public for a while, or ever, depending on how the legal battles play out. As for now, it is only a matter of wait and see.