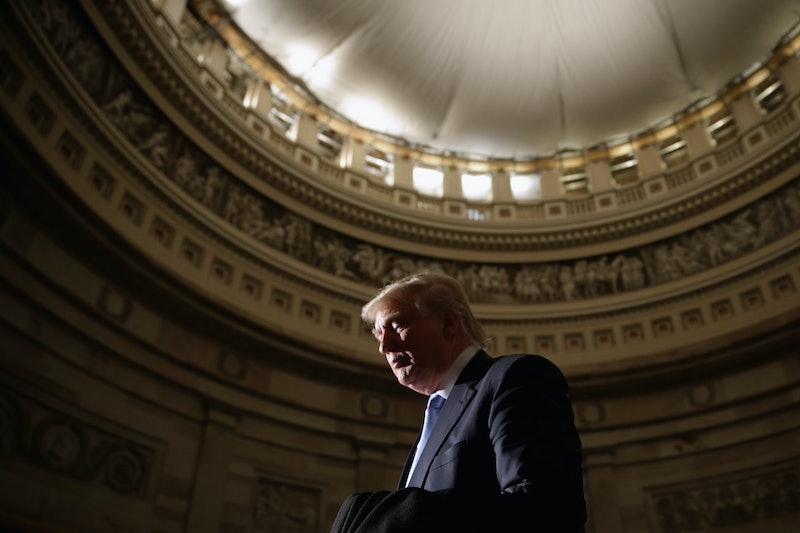 The Republican tax plan, recently approved by both the Senate and the House, will soon be making its way to President Donald Trump's desk. It's clear that the bill has benefits, but it remains to be seen just how much the majority of taxpayers stand to gain. According to many analysts, when it comes down to how the tax plan affects rich Americans, well, the odds are ever in their favor.

Republicans have promised that the bill will lower taxes for businesses and families, while also claiming that wealthy Americans won't gain as much — in fact, Trump himself has said the bill wouldn't benefit him. Not so, according to many tax experts, who say the wealthiest stand to gain the most.

An analysis of the plan by the Urban-Brookings Tax Policy Center, a group of nonpartisan tax experts, finds that the plan would deliver modest tax cuts to most households, which would see an average cut of $1,700 in 2027. But even those cuts, they argue, would be unevenly spread, and one in four households could wind up paying even more in taxes.

In 2018, all income groups would see their average taxes fall, but some taxpayers in each group would face tax increases. Those with the very highest incomes would receive the biggest tax cuts. The tax cuts overall are smaller as a percentage of income in 2027, and taxpayers in the 80th to 95th income percentiles would, on average, experience a tax increase.

Wealthy Americans, however, stand to gain a lot. The study found that 80 percent of the benefits outlined in the plan would go to households making more than $900,000 annually, and those households would see taxes drop by more than $200,000, on average.

Critics of the bill say while the wealthy benefit, the working class will suffer. Oregon Gov. Kate Brown said on Twitter that the bill "gives the wealthy and corporations major tax cuts while middle class families lose benefits." In a press release, advocacy group Moms Rising called it "a tax plan only a billionaire could love," arguing that the plan "lines the pockets of [Trump's] rich friends and family – leaving everyday Americans to foot the bill."

As many have noted, loopholes in the bill seem to lie in direct contrast to Trump's claims that he wouldn't benefit. After Republican Senator Bob Corker announced he was throwing his support behind the bill (after earlier saying he wouldn't), the International Business Times broke the story that a provision in the bill would benefit Corker personally. The particular provision, which would extend a 20 percent tax rate to real estate investors, would benefit Trump, as well.

Although the bill has already undergone several iterations, the benefits to the ultra-rich have grown since the bill was first introduced. An analysis by Business Insider found that tax cuts for Americans who earn more than $1 million a year has "more than tripled since the House first introduced its tax plan."

Even though the wealthiest stand to be rewarded most handsomely, the bill's advocates claim that the extra wealth will trickle down. Lowering tax bills for big corporations and wealthy business owners, they say, will in turn lead to hiring sprees and raises for lower-income Americans. The White House has called the bill "pro-growth, pro-worker and pro-American business," saying its passage "will lead to more jobs, higher wages and a renewed competitive advantage for American companies."

It's not entirely clear that will happen, however, with critics saying business owners might just return the added cash to shareholders. A Bloomberg survey found that few corporate executives are promising to hire more workers or build additional company infrastructure should the legislation go into effect.

More like this
This Is When Netflix Is Going To Start Charging You For Sharing Passwords
By Darshita Goyal
The Mysterious Gunther Corporation From 'Gunther’s Millions' Has Dissolved
By Brad Witter
These Are The Fastest Electric Kettles You Can Buy
By Margeaux Baulch Klein
Maya Jama’s Net Worth Definitely Won’t Give You The Ick
By Sophie McEvoy
Get Even More From Bustle — Sign Up For The Newsletter
From hair trends to relationship advice, our daily newsletter has everything you need to sound like a person who’s on TikTok, even if you aren’t.