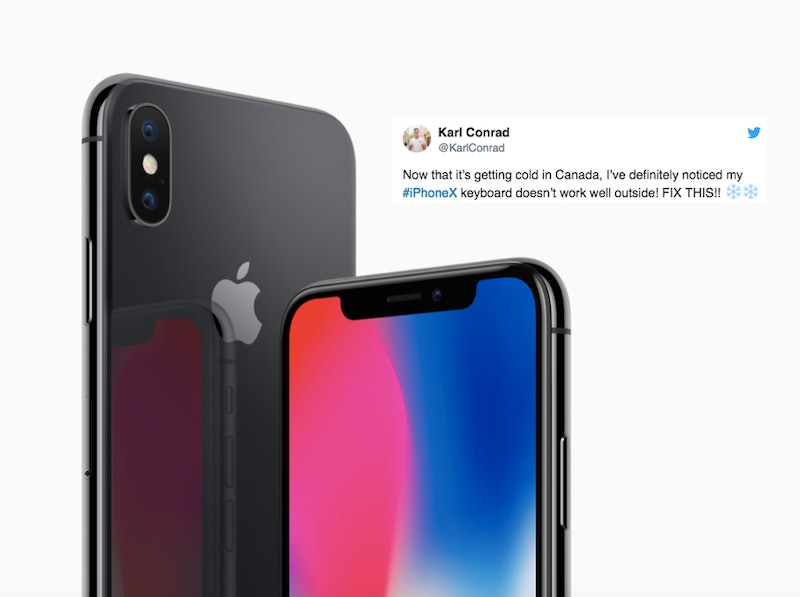 Loyal iPhone users can’t seem to catch a break. First, the iOS 11.1 update caused the letter “I” to be replaced with the letter “A” and a question mark, which led to some pretty iconic memes. Now, with temperatures dropping throughout the country, Apple fans who shelled out for the brand-new iPhone X are noticing yet another problem with their phones — the iPhone X screen might stop responding when cold. This may cause a serious issue for iPhone X users considering, ya know, cold weather is common during the winter months.

Reddit user darus214 first pointed out the issue in a thread dedicated to iPhones on Thursday, Nov. 9:

I've noticed that my iPhone X screen becomes very unresponsive as soon as I step outside. It literally takes 2 seconds from going inside to the cold outdoors and my screen stops being very responsive. I try swiping on websites and it doesn't register my finger. It's very noticeable. Is anyone else having this problem?

Their post, which currently has over 150 subsequent comments, quickly garnered attention from other Redditors who had similar problems with their iPhone X. Reddit user ultraspoon stated in the same thread: “Been experiencing this, myself. Funny thing: it appears to be a software problem. Locking and then unlocking the screen fixes the issue.”

One Redditor, JStheoriginal, described exactly how their iPhone X was malfunctioning in the -4 degree Fahrenheit weather: “I had to enter my passcode 4 times because it missed digits, and FaceID didn’t recognize me.” But after taking ultraspoon’s advice, JStheoriginal’s phone started working properly again. “Sure enough. Walked outside…recognized 20% of my touches. Locked the screen and unlocked. Recognized 100% of my touches. lol. I'm glad there's a workaround while this can be fixed!” Not everyone who took their iPhone X out in the cold had this issue.

Apple responded to complaints via a statement to The Loop:

"We are aware of instances where the iPhone X screen will become temporarily unresponsive to touch after a rapid change to a cold environment. After several seconds the screen will become fully responsive again. This will be addressed in an upcoming software update," Apple said.

But exactly how cold is cold? One Redditor worried that living in Canada would cause their new phone to continuously mess up. Another stated that as a frequent skier, an iPhone that can’t perform in cold weather is a deal breaker. As a Southerner, anything below 70 degrees Fahrenheit calls for a bubble coat, IMO.

Apple Support provides general temperature guidelines for their products on the Apple website:

Potentially having to lock and unlock every time you go out into the cold is a nuisance, especially considering the iPhone X costs between $999 and $1,149, and because, well, winter is coming. When you pay that amount of money, you expect your device to work perfectly. Apple is aware of the problem, and is committed to fixing it during the next update that will be released soon. If you’re an iPhone user, there probably aren’t many (if any) things that could go wrong with your phone to make you switch to Android. If you’re #teamAndroid, this latest bug is yet another reason you insist Android is superior to iPhone. In the end, everybody will get what they want.