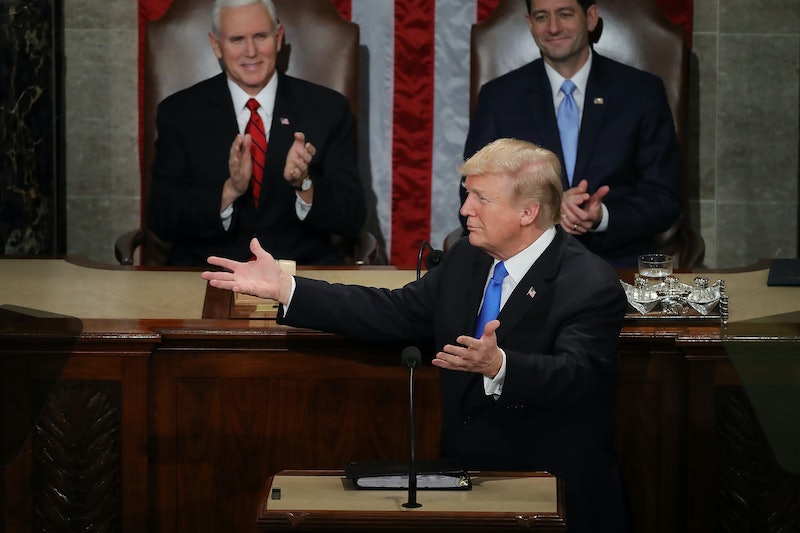 The power struggle between POTUS and Nancy Pelosi over the State of the Union reached a tipping point on Wednesday, when she said he wasn't allowed to give the speech from the House floor. Given that Trump has already denied Pelosi's request to postpone the SOTU until the government re-opens, it seems unlikely he'll drastically change his plans now. Since it doesn't look like the State of the Union will happen in the House, you might be wondering if it can take place elsewhere.

In short, there is no explicit rule that the State of the Union has to be delivered in person by the president to the House of Representatives. In fact, as Vox notes, many presidents in history have submitted the speech in writing to the House without ever reading it aloud.

The publication further clarifies that the Constitution does require the president to provide Congress with an updated State of the Union "from time to time." However, it does not provide any specific requirements as to how, where, or with what frequency the president must deliver this information.

Trump could hypothetically give the State of the Union from the Oval Office, if he really wanted to. Other locations, on the other hand, would provide a few roadblocks.

If Trump wanted to give the SOTU from the Senate floor, he'd have to receive a majority vote of approval by the Senate. That wouldn't be insurmountable, given its Republican majority, but it would certainly pose as a roadblock in terms of time needed to set up the event.

According to The New York Times, Trump is now actively looking for other venues to host the SOTU — and House Minority Leader Kevin McCarthy is working to help him get the job done. In a tweet on Jan. 23, McCarthy wrote:

Retweet if you agree that the State of the Union should proceed as planned. I just signed and submitted a resolution that would permit President Trump to deliver his #SOTU address in the Capitol on January 29th.

In a follow-up to that tweet, McCarthy attached a photo of his resolution, writing, "Here is the resolution. Now, more than ever, Americans should see their government leaders in the same room, working to make our future brighter."

If Trump decides to forgo the speech entirely and submit it in writing, it will hardly be the first time that this has happened. According to the Council on Foreign Relations, the SOTU was delivered in written form for around a century, from Thomas Jefferson's presidency until Woodrow Wilson took office in 1913, at which point he revived the notion of the SOTU as a speech.

However, if Trump does follow through with giving the speech at another venue, like the Oval Office, it will be a first. But one thing is clear: Trump cannot give a speech in the House without the House speaker's approval, per Vox. The president needs explicit permission to speak from the podium on the House floor, and it's been made abundantly clear that Pelosi intends to give no such thing.