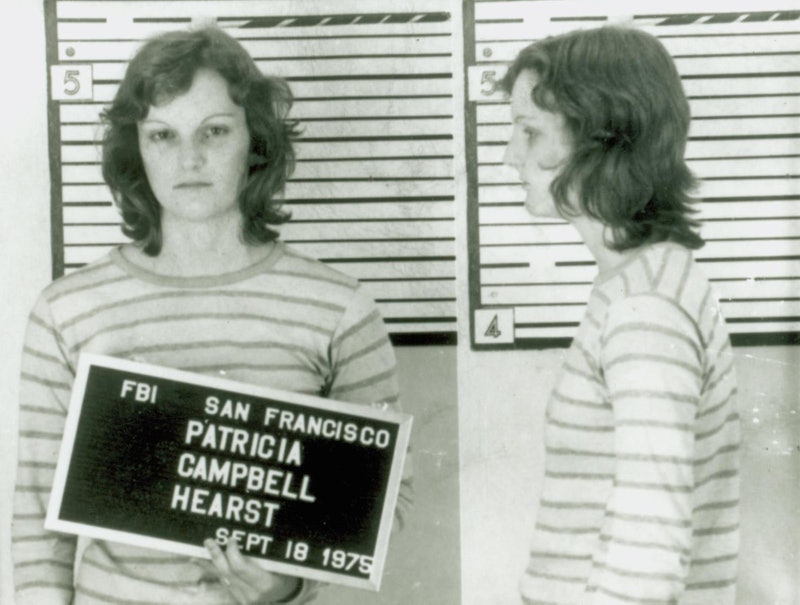 Few cases have so fascinated the public than that of Patty Hearst. The granddaughter of media giant William Randolph Hearst was kidnapped by the Symbionese Liberation Army in 1974, making headlines across the nation. But when Hearst reemerged, she was an active participant of the SLA. (BBC reported that she later claimed to have been brainwashed and threatened into joining.) All of this, will be covered in the new CNN docuseries, The Radical Story of Patty Hearst, which premieres Sunday, Feb. 11. But people who aren't familiar with the case might be wondering, is the Symbionese Liberation Army still around?

Though their name draws clear parallels with other revolutionary groups throughout history, particularly the Chinese People's Liberation Army founded by Mao Zedong, the SLA was a much smaller group of American radicals formed in Berkley, California, per Slate. The same report states that the group derived their name from the word "symbiosis", which is a biological term that refers to the phenomenon when two different organisms begin to live together in an intimate association, according to the Miriam-Webster definition. In the case of the SLA, the word is used to denote a unification of all peoples, regardless of race, class, or gender differences.

The SLA was led by Donald DeFreeze, an escaped convict whom the FBI describes as a "hardened criminal," and the Bureau claims that the group's mission was to use guerrilla violence to wage a war against the U.S government, which they saw as a "capitalist state." Their slogan reflected these goals: "Death to the fascist insect that preys on the life of the people." A seven-headed cobra served as the group's symbol.

Before the Hearst kidnapping catapulted the group from relative obscurity to the front page of the papers, the group had committed murder. Slate reports that in 1973, the SLA claimed responsibility for the murder of Marcus Foster, who was "the first black superintendent of the Oakland school district" according to the report. The New York Times reported at the time that police had obtained letters from the SLA, who claimed responsibility for the murder and say they killed the superintendent with cyanide bullets.

But it was the kidnapping of Hearst that truly put the SLA on the map. The then-19-year-old publishing heiress was kidnapped from her Berkeley apartment by members of the SLA on February 4, 1974, according to the FBI. Slate reports that the SLA initially referred to Hearst as a "prisoner of war," and demanded that her father, Randolph Hearst, begin distributing food to poor populations in exchange for his daughter. Randolph Hearst announced a $2 million food distribution program, but his daughter was not released, per Slate.

Then the case took a turn. Slate reports that in April of 1974, the SLA released a taped "communiqué" in which Hearst shared that she had adopted the new name of Tania (taking a new name was a common practice amongst SLA recruits) and planned to stay and fight with her kidnappers. She was seen in security camera footage assisting in an armed robbery of a Hibernia Bank in San Francisco. The Atlantic reports that it was this moment that the American public stopped viewing Hearst as a victim, and started seeing her as a willing participant in a terrorist group.

Hearst continued to participate in SLA activities even after six SLA members perished in a police shoot-out, per Slate, before finally being arrested by the FBI in September of 1975. Though the nation now regarded Hearst as a criminally willingly participating in the SLA's violent activities, during her trial Hearst claimed that she was brainwashed, forced to make tapes saying she was in league with the SLA, and raped by SLA members, per Slate. Despite this, Hearst was sentenced to seven years in prison, but had her sentence commuted by President Jimmy Carter in 1979, per CNN.

After the resolution of the Hearst kidnapping, the SLA retreated into historical obscurity. The FBI reports that the last members of the SLA were arrested in 1999 and 2002. While other radical groups of the '70s, such as the Black Panthers, have gained a spot in history books, the SLA is usually mentioned only in conjunction with the Hearst case. But with the premiere of the new CNN docuseries approaching, the American public might soon become better acquainted with one of the forgotten radical groups in American history.