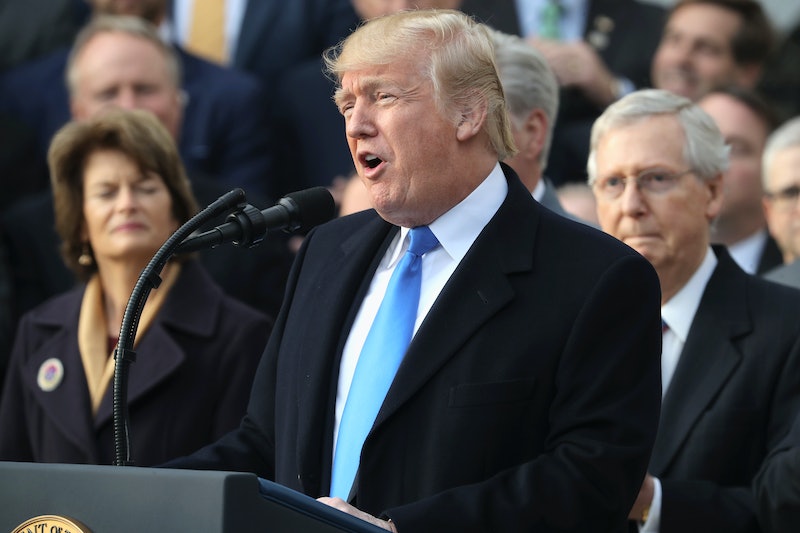 President Donald Trump has had just one major legislative victory in 2017: the tax bill. In his speech about the massive tax overhaul on Wednesday, Trump said that the bill "essentially repealed Obamacare." But the GOP tax bill does not repeal Obamacare, it just damages it in a way that will end up costing you more on premiums.

What Trump claims the tax bill did was repeal the individual mandate, the provision of the ACA that requires all Americans to get health insurance. But it didn't. Technically it just kills the penalty or tax that you're charged for not buying insurance. The requirement to do so, though, is still written into the original health law. And on top of that, the exchanges under Obamacare all still exist, as do the regulations on pre-existing conditions and the Medicaid expansion.

Trump would like to see it as a bigger win though. He said Wednesday:

He went on to suggest that he and the GOP snuck in the change after being unable to pass a skinny repeal of Obamacare over the summer. A skinny repeal would have gotten rid of the individual mandate, the requirement that certain size employers offer health insurance, and a few other taxes, like the one on medical devices. "We didn't want to bring it up. I told people specifically 'be quiet with the fake news media because I don't want them talking too much about it," Trump added.

That was probably wise, because if the Democrats had made more noise about it, the public could have balked at the potential for rising premiums. A study by the non-partisan Congressional Budget Office showed that by repealing the health care law's individual mandate, premiums will rise about 10 percent each year, and that 14 million people will lose their health insurance by the end of the decade. That could eat up what many middle class families save on their taxes — or more.

This was a concern that Sen. Susan Collins of Maine had before voting on the bill. In order to get her vote, Senate Majority Leader Mitch McConnell promised to enact some health care legislation that would stabilize individual insurance markets. She wanted stability funds for subsidized insurance premiums, called cost-sharing reduction payments that go to insurance companies to cover deductibles and co-payments for low-income consumers.

The other bill that she wanted passed was designed to help insure high-risk people with pre-existing conditions. Without the requirement to buy insurance, many healthy people will drop out of the market, raising costs for everyone but particularly for the insurance companies who have to cover costs for these high-risk people.

The goal Collins had was to get this passed by the end of the year, as a part of the stopgap bill that will keep the government running past Friday. After it became clear House Republicans weren't willing to work on the measure, she announced she would push for the measures in January. Collins claimed that House Speaker Paul Ryan assured her these could pass in the new year.

"He pointed out that by waiting until early next year, we will be able to use a new (Congressional Budget Office) baseline that will result in more funding being available for reinsurance programs that have been proven effective in lowering premiums while protecting people with pre-existing conditions like diabetes, heart disease, and arthritis," Collins said in a statement.

That makes it sound like Congress will be protecting Obamacare from demise, not welcoming it like Trump has. While Trump has celebrated the tax bill as an Obamacare repeal, the facts show that it's here to stay. Just how much damage it would inflict on the health care law, however, remains to be seen.