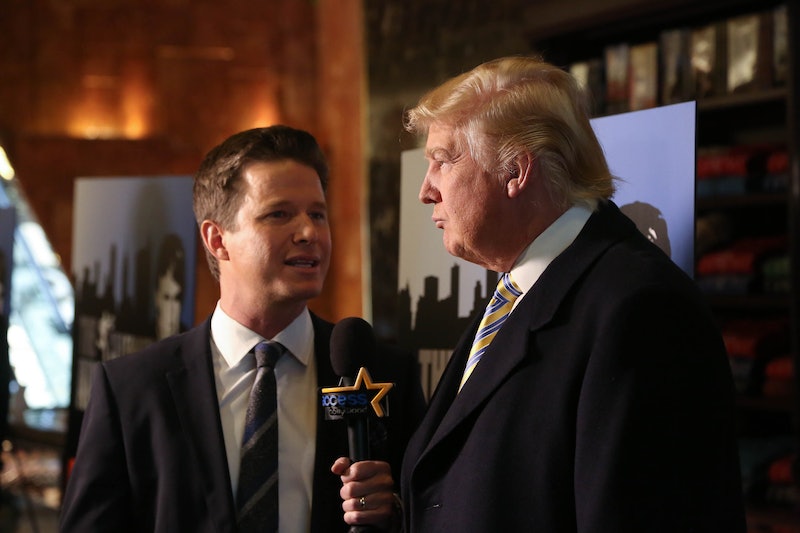 It was a moment that many people believed would be the downfall of Donald Trump’s candidacy for president. On a tape that was recorded on the set of Access Hollywood back in 2005, and later leaked to the Washington Post, the reality star was overheard making crass, offensive remarks to host Billy Bush. At the time, he did not deny the remarks. A recent New York Times report indicates, however, that Trump now claims the Access Hollywood tape is fake.

The tape in question was published only a month before the 2016 presidential election. It quickly went viral, as the public learned that the Republican candidate for commander-in-chief had once joked about grabbing women "by the pussy," because "when you’re a star, they let you do it." At the time, Trump simply dismissed the comments as "locker-room talk."

We already know that the Access Hollywood tape was not enough to swing the election in Hillary Clinton's favor. White women, in particular, came out for the current president — 53 percent of these voters, in fact, chose Trump. Even so, the tape says important things about his character.

Below is a brief timeline of everything the president has said in regard to the tape:

In a statement published shortly after the release of the video, Trump dismissed the comments as "locker room banter" — the sort of crude joking that's only meant to be exchanged between men. He added, "Bill Clinton has said far worse to me on the golf course."

Later that evening, Trump said that he regretted the "more than a decade-old video"— which he called a "distraction" — and apologized to the public. He then went on to talk about how spending time with people "who just want a better future" had changed him for the better, and pledged to be "a better man."

Back To "Locker Room Talk"

The president used the "locker room" chatter excuse a few days later, on the night of the second presidential debate. During that debate, the candidate famously said, "I have great respect for women. Nobody has more respect for women than I do."

"The Microphone Was Not Supposed To Be On"

On Oct. 27, 2016, Trump told Bill O'Reilly that NBC's decision to record him on set was "absolutely" illegal, saying, "the microphone was not supposed to be on." Earlier that day, during an interview with Catholic channel EWTN, the candidate repeated the same claims.

California has a two-party consent law that requires both parties to a conversation to agree being recorded, and as the Hollywood Reporter noted, legal concerns over this law were part of the reason that NBC News got scooped by the Washington Post on publishing the tape. Even so, Trump is a public figure and should likely have known about the tapes, so it's not certain a strong case could be made against NBC.

The Tape Is Not Authentic

In a complete reversal of the president's original response, the New York Times reported on Sunday that Trump has supposedly suggested to multiple people in Washington that the Access Hollywood tape is fake. In one of the most WTF moments of the year, he's reportedly contradicted himself. On Monday, Access Hollywood host Natalie Morales assured the public that the tapes are, in fact, real.

We wanted to clear something up that has been reported across the media landscape. Let us make this perfectly clear — the tape is very real. Remember his excuse at the time was 'locker-room talk.' He said every one of those words.

In a press conference, however, White House press secretary Sarah Sanders said that Trump has not changed his position on the issue, and added that the president was troubled by "the accounts that are being reported now."

“The president hasn't changed his position,” Sanders said. “If anything the president questions, it’s the media's reporting on that accuracy.” It's oftentimes difficult to try and make sense out of the president's logic, and this is no exception.