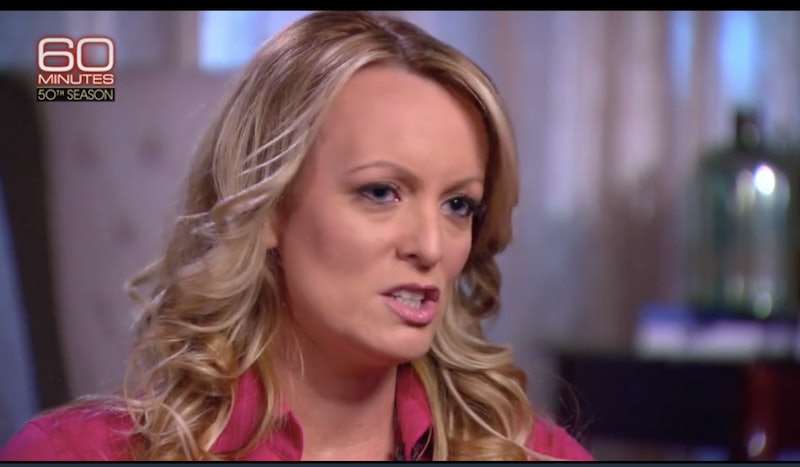 During Sunday's episode of 60 Minutes, adult actress Stormy Daniels said that Trump reportedly watches Shark Week — and that she once watched a documentary about shark attacks with the president. Daniels' comments on 60 Minutes echo similar remarks she has made in the past about Trump and his fascination with sharks. They have also stirred up some seriously strong reactions on social media.

Daniels, whose given name is Stephanie Clifford, was being interviewed on 60 Minutes to discuss her alleged 2006 affair with Trump (Trump denies that the affair ever took place). Daniels alleged that she first had an affair with Trump in 2006, after they met at a celebrity golf tournament. She then told Anderson Cooper, who was interviewing her for the 60 Minutes piece, that she reportedly stayed in touch with the president following their initial meeting. Daniels told Cooper that Trump allegedly invited her to meet with him again in 2007 for a business meeting to discuss the possibility of her appearing on his show, Celebrity Apprentice.

Daniels reportedly gained insight into Trump's affinity for Shark Week during this alleged meeting. As she told Cooper, "I remember arriving [to meet with him], and he was watching Shark Week. He made me sit and watch an entire documentary about shark attacks." Daniels also told Cooper that she had allegedly watched Shark Week programming with Trump for a significant amount of time, noting that she allegedly stayed with him for four hours and specified that the two did not have intercourse at that time.

After watching Daniels' interview with Cooper, many on social media found the president's alleged interest in Shark Week amusing, while others accused him of "ruining" Shark Week for them. Still, others found it ironic that Trump allegedly decided to meet with Daniels, but then supposedly spent the duration of their meeting watching Shark Week.

Her interview with Cooper does not constitute the first time that Daniels has discussed Trump's reported Shark Week viewing tendencies. During an interview conducted by InTouch Weekly in 2011, Daniels also discussed the same alleged meeting with Trump, but offered further details about his interest in sharks. As Daniels told the publication:

You could see the television from the little dining room table and he was watching Shark Week and he was watching a special about the U.S.S. something and it sank and it was like the worst shark attack in history. He is obsessed with sharks. Terrified of sharks. He was like, "I donate to all these charities and I would never donate to any charity that helps sharks. I hope all the sharks die." He was like riveted. He was like obsessed. It's so strange, I know.

Trump himself has even made his feelings about sharks known on social media. In July 2013, the now-president tweeted, "Sorry folks, I'm just not a fan of sharks - and don't worry, they will be around long after we are gone." In another tweet on the same day in 2013, Trump also wrote, "Sharks are last on my list – other than perhaps the losers and haters of the World!"

This is also not the first time that Trump's views on sharks have been the subject of public fascination. When Daniels' InTouch interview first came out, Market Watch reported that donations to shark conservation organizations readily increased. Indeed, the outlet reported that Cynthia Wigren, the chief executive officer and co-founder of Atlantic White Shark Conservancy, said that the organization had been receiving donations in Trump's name after the interview was published.

Overall, Trump's reported views on sharks have certainly sparked a great deal of public interest. While the Discovery Channel has not yet scheduled Shark Week for 2018, there is wide speculation that it will air in July. Whenever the series does air, you can bet that many members of the public will be wondering if the president is watching — and whether he will share his thoughts on the programming.