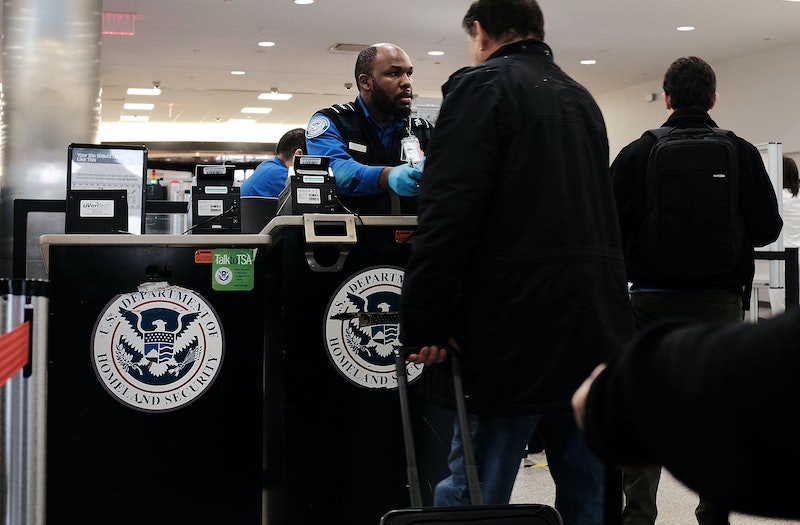 In the past, TSA and the other necessary governmental agencies that keep air travel moving forward remain on duty, but are "paid retroactively" after the funding disputes are settled, according to USA Today. Some other government employees aren't as lucky, though. Former Washington D.C. Mayor Vince Gray and other DMV officials said during the 2013 government shutdown that the area lost out on $217 million a day in wages, according to the Washingtonian.

In January 2018, when the government shut down due to disagreement over DACA recipients, USA Today's Bart Jansen reported that along with federal air marshals, 52,629 of 58,007 TSA workers weren't subject to the shutdown "because they are necessary to protect life and property." This also applied (at that time) to 54,461 Customs and Border Protection workers and 25,127 workers with the Federal Aviation Administration, according to USA Today.

During that same shutdown, however, TSA administrator David Pekoske clarified that the agency wasn't completely unaffected. "What a shutdown does is you spend a lot of time planning and recovering from a shutdown. That's in my view a loss of time. We're busy all the time," Pekoske told USA Today. Additionally, processing for passports saw some delays, according to CNBC.

This potential government shutdown, in particular, could happen because of the fight over border security funding. According to ABC News, President Donald Trump really wants funding for a wall on the southern U.S. border with Mexico. In fact, on Tuesday he told reporters who were watching his meeting with Democratic congressional leaders Chuck Schumer and Nancy Pelosi that he'll be "proud" to shut down the government. According to ABC News, he explained,

Right now, though, it doesn't look like Democrats are going to budge on the matter. Schumer made it clear to NBC News that "he’s [Trump] not going to get the wall in any form."

If no agreement is reached, it's worth noting that only 13 percent of Homeland Security workers were furloughed during the last government shutdown, according to The Washington Post. That means your holiday air travel shouldn't require you to make new plans. And during an already hectic time for travel, that's good news.