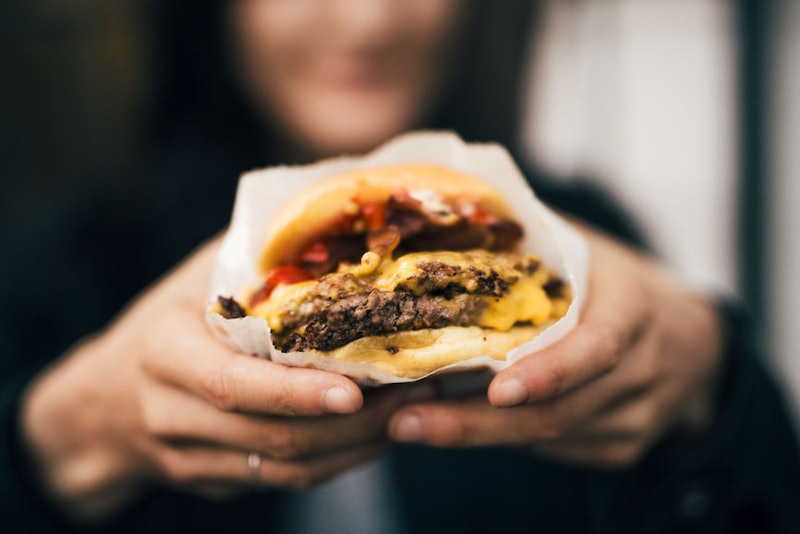 There's no definitive cause for depression, most experts agree, but a new study suggests that a diet heavily reliant on less healthy food might increase your risk of developing it. As the Guardian reports, a study published in the journal Molecular Psychiatry concludes that a diet high in fat, sugar, and processed foods can directly impact your susceptibility to the mental illness. So let's take a closer look at the research: does junk food increase your risk of depression, and how?

Researchers from the UK, France, Australia, and Spain analysed the findings of 41 prior studies on diet and depression, and concluded that a "pro-inflammatory diet" — which includes those high in fat, sugar, and processed foods — directly elevates the risk of developing depression. "A pro-inflammatory diet can induce systemic inflammation," said Dr Camille Lassale, the study lead author from University College London (UCL)'s department of epidemiology and public health. She told the Guardian, "Chronic inflammation can affect mental health by transporting pro-inflammatory molecules into the brain; it can also affect the molecules — neurotransmitters — responsible for mood regulation."

In contrast, the study says, "adhering to a healthy diet, in particular a traditional Mediterranean diet, or avoiding a pro-inflammatory diet appears to confer some protection against depression." A Mediterranean diet is one rich in fruit, vegetables, fish, and nuts, according to the Guardian.

Dr Tasnime Akbaraly, a co-author of the study also based at UCL, said, "Our study findings support routine dietary counselling as part of a doctor’s office visit, especially with mental health practitioners." And Professor Helen Stokes-Lampard, chair of the Royal College of GPs, agreed, telling the Guardian that the study "adds to the growing body of research which shows that what we eat may have an impact on our mental health."

One dissenter, however, was Professor Naveed Sattar, who researches metabolic medicine at the University of Glasgow. "The current evidence is not sufficient to prove plant-rich diets can prevent depression as most of the evidence so far simply shows that those with poorer mental health eat worse," he told the newspaper, adding, "Also, the link to inflammation as a plausible mechanism to explain a link between diet and mind health is highly tenuous."

Over 300 million people worldwide experience depression, the World Health Organisation says, while mental health charity Mind says every 3.3 people out of 100 have depression in England. According to the charity, there are numerous factors that can influence the onset of the mental illness, including life events, genetic inheritance, and lifestyle. "Some find that they become depressed without any obvious reason," the charity points out.

But the UCL study isn't the first to suggest a connection between diet and depression. A 2017 analysis in Psychiatry Research, conducted by researchers at the Linyi People's Hospital in Shandong, China, concluded, "A dietary pattern characterised by a high consumption of red and/or processed meat, refined grains, sweets, high-fat dairy products, butter, potatoes and high-fat gravy, and low intakes of fruits and vegetables is associated with an increased risk of depression." The diet associated with a decreased depression risk? One with "high intakes of fruit, vegetables, whole grain, fish, olive oil, low-fat dairy and antioxidants and low intakes of animal foods."

And a 2018 study analysis by researchers from the Netherlands and Spain, published in the Journal of Affective Disorders, said, "There is evidence that a higher quality of diet is associated with a lower risk for the onset of depressive symptoms," but noted that "not all available results are consistent with the hypothesis that diet influences depression risk."

When analysing studies like these, it's important to keep in mind that diet isn't always a choice: income and class are major factors influencing the foods people have access to. In 2017, a survey by the Food Standards Agency revealed that "one in four low-income households struggles to eat regularly or healthily because of a lack of money," as the Guardian reports.

A study released earlier this month indicates that a significant amount of UK households cannot afford to meet the government's Eatwell nutrition targets. "Almost 4 million children in the UK live in households that would struggle to afford to buy enough fruit, vegetables, fish and other healthy foods to meet the official nutrition guidelines," the Guardian says.

It's vital, therefore, to consider that regardless of the health benefits of certain diets, a significant proportion of the population simply can't access them. If diet really does influence depression — as a growing amount of research suggests — the government and medical professionals must not only recommend consuming particular foods, but ensure everyone has access to them.