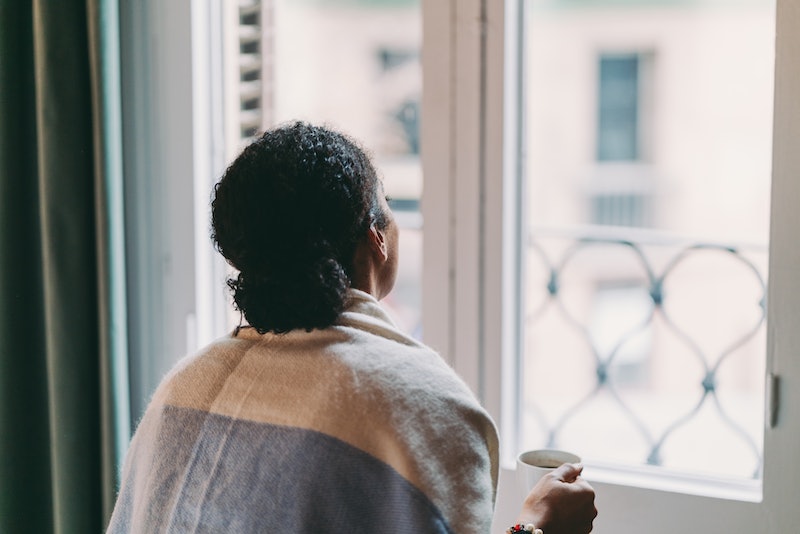 Over the last two months, the UK government has encouraged people to stay indoors in order to prevent the spread of COVID-19. However, charities, MPs, and activists have highlighted that this could be incredibly dangerous for people living with abusers and now statistics are showing that visits to one domestic abuse charity website are up nearly 1,000%. Refuge runs the National Domestic Abuse Helpline and has seen another "significant" spike in the number of people reaching out for help.

Since lockdown began, Refuge, a charity providing specialist support for women and children experiencing domestic violence, has highlighted the need to support people in abusive and dangerous situations during the crisis. Over the last three weeks, the charity reported a 66% increase in calls to its helpline and, shockingly, they recorded a 957% increase in web traffic in just the past two weeks. A charity spokesperson has explained to the BBC that while lockdown itself does not cause domestic abuse, it "can aggravate pre-existing behaviours in an abusive partner".

As part of their services, Refuge offers safe houses and support for people who have suffered domestic abuse. Speaking about these new figures, Sandra Horley, chief executive of Refuge, said: “Right now women’s lives depend on them being able to access the specialist services Refuge provides, and now, more than ever, we must continue to provide the confidential support needed. Women up and down the country are isolated with abusive partners – and children will be witnessing and in some cases experiencing domestic abuse. The sheer numbers of women seeking specialist support show just how vital Refuge's services are.”

Refuge isn’t the only charity to record increases in reported incidents of domestic abuse. The United Nations Population Fund has found that all around the world charities and organisations have seen a surge in calls to domestic abuse hotlines. If the lockdown continues for six months, it's reported that 31 million additional gender-based violence cases can be expected globally. For every three months the lockdown continues, an additional 15 million additional cases of gender-based violence are predicted.

Similarly, an open letter written to the government on April 3 from a collection of women's charities explained: “The mass experience of isolation measures, the diversion and repurposing of public services to respond to COVID-19, and the existing vulnerability of many women and girls at a time of less protection is a potential crisis. More women and girls will be abused and are at risk in this period. Every pandemic and major disaster has found this.”

The government pledged £76 million to support survivors of domestic and sexual abuse after there was a rise in cases reported during the COVID-19 pandemic. The money will go towards allocating out priority housing and funding support services.

If you or someone you love have been affected by any of the issues mentioned in this piece, contact Refuge's UK-wide 24-hour helpline on 0808 2000 247 or contact them online via live chat or message. In an emergency, call the Police on 999 and press 55 when prompted if you can't speak.

More like this
Here’s Where The NHS Nurses’ Strike Currently Stands
By Sophie McEvoy
What The UK Blocking Scotland’s Gender Recognition Bill Means
By Sam Ramsden
Gen Z Are Twice As Likely To Identify As Queer, According To New Data
By Sam Ramsden
Watch Jacinda Arden’s Devastatingly Honest Resignation Speech
By Sam Ramsden
Get The Very Best Of Bustle/UK
Sign up for Bustle UK's twice-weekly newsletter, featuring the latest must-watch TV, moving personal stories, and expert advice on the hottest viral buys.