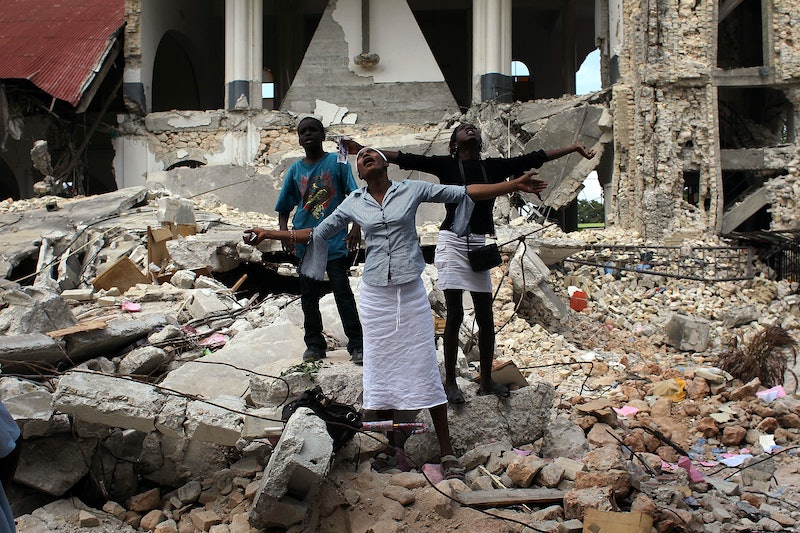 I never knew my grandparents. My mom lost her family while she was young, and I never got to know my papi's parents. I often think about what it would've been like to know them, especially since my knowledge of my family's roots is shallow. My lineage, however, is strong and deep. Because the history of Haiti is my history.

My parents emigrated from Haiti to the United States to give me a better life. But Haiti shaped who they are, and, therefore, who I am. Haiti determined how I was raised, my deepest attitudes and beliefs, and how I interact with the world. Haitian identity is my identity, even if I never lived there. And Donald Trump's decision to expel 59,000 Haitians from the U.S. — people who came here because their homeland was devastated by an earthquake — violates everything that Haiti, and I, stands for.

In 1791, almost a decade after the culmination of the American Revolution, enslaved Haitians launched the largest slave uprising since Spartacus' uprising in 73 B.C. For 13 years, Haiti fought to overturn French colonialism and slavery, and by 1804 had, like America, become a free republic.

Haiti's was the first slave-led revolution that successfully created an entirely free state, and it sent a message to the rest of the world: Slavery is not invincible, and it will not last. The establishment of Haiti as a free state for black people is one of the most important moments in black history, in world history, and in human history. It is part of who I am.

"There really is no good reason for revoking TPS, except for Trump to appeal to his base of bigoted white nationalists."

The Haitians Donald Trump is trying to expel came to the United States via Temporary Protective Status (TPS) because their country was shattered by a devastating 2010 earthquake. Just six months ago, the Gen. John Kelly-led Department of Homeland Security officially concluded that conditions in Haiti justified a continuation of TPS for these citizens for six more months.

However, since that assessment, the country has been hit hard again, as many Caribbean nations were, by Hurricanes Irma and Maria. Experts have likened food shortages in Haiti to that of a famine, and tens of thousands of Haitians remain displaced. Cholera continues to ravage Haiti's most vulnerable areas, and the country's physical issues are compounded by societal and political ones, like gross human rights abuses and mass child labor.

The worst part about this whole situation isn't even that these thousands of people will have to go back to a country still obliterated by natural disaster. Their 27,000 U.S.-born children will live in constant fear that they or their parents will be deported. These mixed-status families have 18 months to hire an immigration lawyer to fight to stay together and in America — or the lives they've established here will be ripped apart.

Our nation exists as it does because of immigrants. Immigrants are a part of what actually makes America great. They always have been, and they always will be.

The next time Trump goes to New York, he should pay a visit to the Statue of Liberty and read the text inscribed on her:

"Give me your tired, your poor,

The wretched refuse of your teeming shore.

Send these, the homeless, tempest-tost to me,

I lift my lamp beside the golden door!"

Those are the words that define America to the world and to ourselves.

President Trump, you know nothing of what it means to be an American.