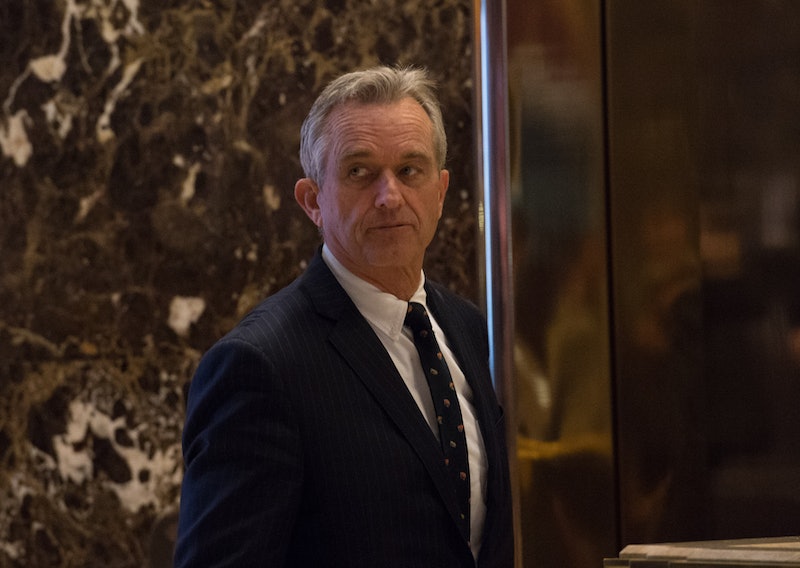 Those hoping Donald Trump isn't as anti-science as is widely believed will be disappointed to hear that he has hired Robert F. Kennedy Jr. to lead a committee on vaccine safety. Following a meeting with the president-elect at Trump Tower on Tuesday, Kennedy told reporters that Trump had asked him to chair a commission to tackle "scientific integrity" in addition to vaccine safety. Kennedy agreed to do so.

Despite the studies and extensive research already proving that vaccines do not cause autism, there is still a large community of people convinced otherwise, and Kennedy has been an active contributor of this misinformation for over a decade. In 2005, he published an article titled "Deadly Immunity" in Rolling Stone and Salon asserting that vaccines containing thimerosal, a mercury-based chemical, cause autism and the government was engaged in a massive conspiracy to cover up the truth. "Even many conservatives are shocked by the government's effort to cover up the dangers of thimerosal," the article states at one point.

Kennedy's claims had already been debunked by the scientific community when the article was written, and Salon ended up having to make five corrections to Kennedy's inaccurate claims. After Seth Mnookin's book The Panic Virus was released in 2011 and criticized "Deadly Immunity" directly, Salon ultimately retracted the piece entirely. "Continued revelations of the flaws and even fraud tainting the science behind the connection make taking down the story the right thing to do," said Joan Walsh, editor-in-chief of Salon at the time Kennedy's piece was published.

Trump seemingly believes that vaccines — at least when done in "one massive dose," as he once tweeted — cause autism. "If I were President I would push for proper vaccinations but would not allow one time massive shots that a small child cannot take - AUTISM," he wrote in 2014. "Healthy young child goes to doctor, gets pumped with massive shot of many vaccines, doesn't feel good and changes - AUTISM. Many such cases! With autism being way up, what do we have to lose by having doctors give small dose vaccines vs. big pump doses into those tiny bodies?"

The majority of vaccines given to children do not include thimerosal; while certain vaccinations against influenza, or the flu, do contain trace amounts, there are thimerosal-free options as well.

Conspiracy theories that frighten parents into rejecting all vaccines for their children pose a long list of risks, and not just for the children themselves. Kennedy's new job should worry anyone concerned with public health and the advancement of science.