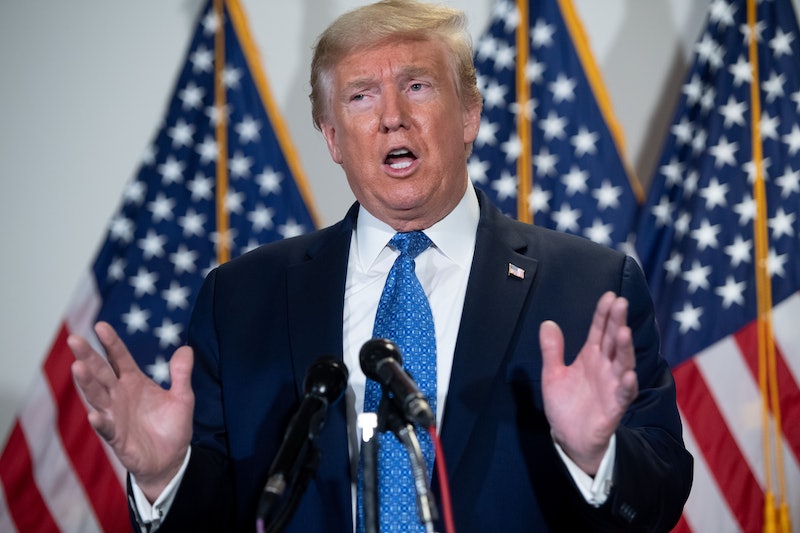 Jeffrey Epstein had a number of famous associates, and among those mentioned in Netflix's new docuseries, Jeffrey Epstein: Filthy Rich, is Donald Trump. According to Vox, the two became friendly in the late '80s and maintained a relationship until the early 2000s. Trump spoke highly of Epstein to a New York magazine reporter in 2002, saying, "I've known Jeff for 15 years. Terrific guy. He's a lot of fun to be with." Trump then added a now-ominous quote, considering what Epstein was later accused of. (He pleaded guilty to soliciting a minor for prostitution in 2007 and was awaiting trial for allegedly running a sex-trafficking ring when he died in 2019.) "It is even said that he likes beautiful women as much as I do, and many of them are on the younger side," Trump said.

In July 2019, NBC News released footage from a 1992 party at Trump's Mar-a-Lago estate where Epstein was in attendance. In the video, Trump and Epstein are seen talking and watching women on the dance floor. Per Vanity Fair, they reportedly attended the same dinner parties often and would visit one another's properties. Trump even reportedly used Epstein's private jet. Here they are pictured together at the Mar-a-Lago club in 2000 along with Melania Trump and Epstein's then-girlfriend, Ghislaine Maxwell.

In 2004, however, Business Insider reports that the two had a falling out. According to Vanity Fair, it had to do with real estate, as they had both sought to purchase the same Florida property. Trump eventually won the bidding war but lost the friendship in the process — eventually even banning Epstein from Mar-a-Lago.

Since becoming president, Trump has tried to distance himself from Epstein. In 2017, Trump attorney Alan Garten told Politico that Trump "had no relationship with Mr. Epstein and had no knowledge whatsoever of his conduct." Although videos and photos show that they at least knew each other socially, Trump said at a 2019 news conference that he "knew him like everybody in Palm Beach knew him," per Vox. "I had a falling out with him a long time ago. I don't think I've spoken to him for 15 years," the president continued. "I wasn't a fan."

That isn't entirely true, considering how highly Trump once spoke of Epstein. But it's par for the course for Trump to make contradicting statements.