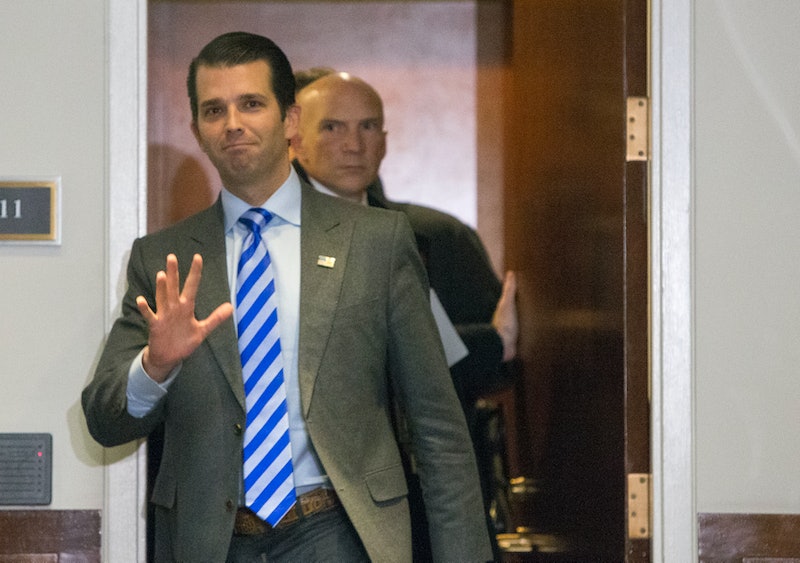 It makes sense that a son would want to defend his father against hurtful rumors, even when said father is the president. Donald Trump Jr., President Trump's eldest son, has made a habit of doing exactly that. As of Friday, Trump Jr. has a new defense of Trump's racism — but it's likely to ring hollow for anyone who has paid much attention to the president's policies, from both his time in office and in his previous life as a real-estate developer.

In an interview with the Daily Caller, Trump Jr. said that those calling his father a "racist, fascist, whatever" were the ones in the wrong. "Certainly, racism exists, but if it’s your response to any argument you can’t win, you actually do a real disservice to those people actually afflicted by it," Trump Jr. said. "To those people who are actually oppressed and hurt by real racism, real sexism."

He went on to argue that his father's critics on the left were essentially crying wolf on this perceived racism, because President Trump, in his son's mind, is not racist.

"I see, I know him, I’ve seen him my whole life. I’ve seen the things he’s done," Trump Jr. said. "You know it’s amazing. All the rappers, all the this, his African-American friends, from Jesse Jackson to Al Sharpton, I have pictures with them."

That's where the defense ends and Trump Jr. moves on to discussing the dishonest media and saying that no one ever called Trump any of these bad things before he got into politics as a conservative. Trump Jr.'s entire defense of his father, then, is that someone who has black friends, someone who has taken pictures with "all the rappers," cannot possibly be a racist.

First of all, this is not a new defense. "I have black friends" is already a cliche at this point, but it was a useless defense of racism to begin with. Separating your friends into black people and people who are not black is already a racist way to look at your friends. Trump Jr. has gone a step further, though, by saying that the president can't be racist because the president has black friends, and those black friends took pictures with him. In Trump Jr.'s mind, apparently, it is impossible to be biased against people of color if there are some pictures of you with people of color.

Now, President Trump's defenders have used some surprising methods of claiming that he is not racist, but this has to rank up there somewhere near the top. The president himself has said that he's the "least racist" person, although he failed to offer any proof. And in fact, this isn't even the first time that people have employed pictures of Trump with various black people to attempt to prove that he holds no prejudices — but that doesn't mean that the effort is working.

However, at least one of the people in those photos has made it clear that this is not the proof that Trump's defenders are looking for.

“We haven’t changed. He changed. And what he’s changed to become is one who has proposed some of the most racist, bigoted policies," said the Reverend Al Sharpton, a longtime Trump contact, according to New York magazine. "When he was talking right, we took pictures with him and welcomed to him to our events. When he went left, we stood up for what was right. He is promoting racism.”

This defense, however, was coming from the same son who said that President Trump's equal condemnation of both sides after the Charlottesville riots between Neo-Nazis and those resisting the Neo-Nazis "should not have been controversial," so you might expect it to be a bit tone deaf. At least this time, he's got some photos to prove his point.