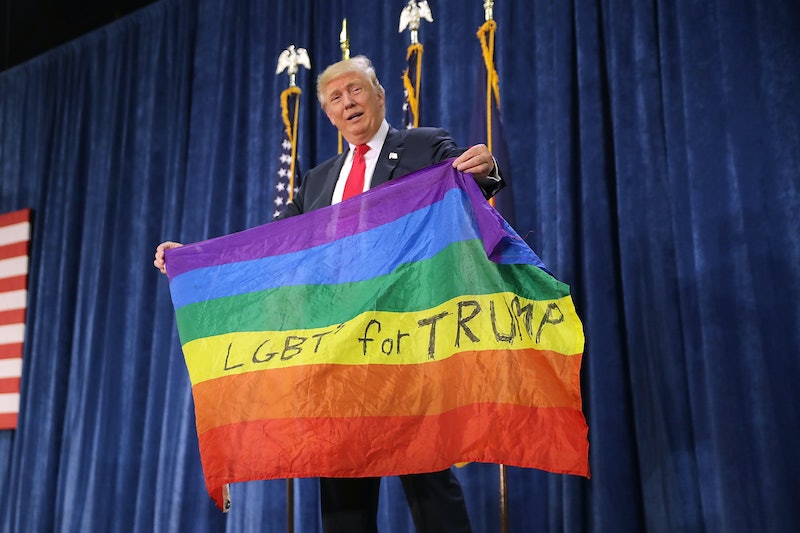 Republican congressmen are hoping President-elect Donald Trump will breathe new life into controversial religious liberty legislation in 2017. The office of Sen. Mike Lee told BuzzFeed the congressman planned to capitalize on Trump's campaign promise to support such legislation by reintroducing a bill that received little traction in 2015. What's even more frightening is that Trump vowed to sign the First Amendment Defense Act (FADA), a bill that would open the door to discrimination against members of the LGBTQ community, if passed by Congress.

Under FADA, the federal government would be barred from using "discriminatory action against a person on the basis that such person believes or acts in accordance with a religious belief or moral conviction." Ultimately, the bill stops the federal government from acting to prohibit discrimination against the LGBTQ community, by making it legal for individuals and businesses to discrimination on the grounds they believe that "(1) marriage is or should be recognized as the union of one man and one woman, or (2) sexual relations are properly reserved to such a marriage."

In essence, the bill states that discrimination against some of the nation's most marginalized and vulnerable populations is OK as long as it's motivated by a religious belief or moral conviction. Along with rolling back many of the civil rights gains made by the LGBTQ community, the bill would shield individuals, employers, and businesses from discrimination lawsuits and further enable them to sue the government should their right to discriminate be challenged, according to NBC News.

Although Trump said he was "fine" with same-sex marriage in a November interview with CBS's 60 Minutes, the president-elect has already voiced his support for FADA. "If I am elected president and Congress passes the First Amendment Defense Act, I will sign it to protect the deeply held religious beliefs of Catholics and the beliefs of Americans of all faiths," Trump says in a section of his website labeled, "Issues of Importance to Catholics." However, his willingness to sign FADA should it pass Congress is a move that stands in stark contrast to claims he made in June about being "a real friend" to the LGBTQ community.

What makes FADA so dangerous is its broad language. The bill does not require individuals or corporations demonstrate a specific religious objection, but rather allows for them to simply cite a conflict with their "moral conviction." Moreover, the language of the bill makes it not just about same-sex marriage, but the morality of a person's sexual conduct.

While opponents of the FADA argue the bill violates both the Constitution and the Supreme Court's ruling on same-sex marriage in Obergefell v. Hodges, supporters, such as the bill's co-sponsor Sen. Ted Cruz, claim it's an "effort to protect religious liberty," which has been under "relentless assault." A spokesman for Sen. Lee, another staunch supporter of the bill, told BuzzFeed News the congressman was planning to reintroduce the bill in 2017 after it became apparent Trump would back the legislation. "We welcome Trump's positive words about the bill," Lee's spokesman, Conn Carroll said.

The bill had initially been introduced in the House and the Senate in 2015, but failed to move beyond a House hearing due to Democratic opposition and suspicion President Barack Obama would veto it. Although a similar bill was struck down by a federal judge in Mississippi on the grounds it violated the First and 14th Amendments, it's unclear if the FADA would face similar legal challenges under a Trump administration. Apart from rolling back some of his campaign promises, Trump's promise to "protect" members of the LGBTQ community seems soft.

"As your president, I will do everything in my power to protect our LGBT citizens from the violence and oppression of a hateful foreign ideology," Trump said in his speech at the Republican National Convention in Cleveland over the summer. Apparently that protection won't extend to threats from the more familiar oppressive and hateful ideologies that have roots in our own backyard.