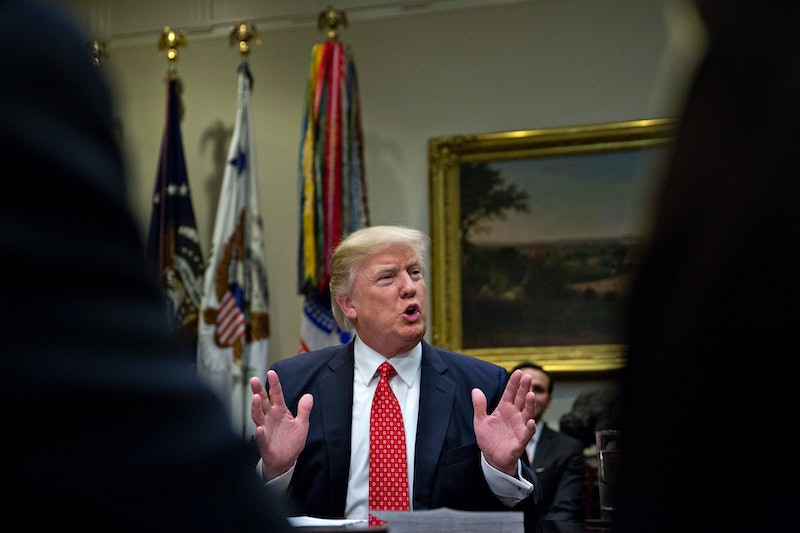 As part of a recent push to exaggerate the effects of terrorism on the United States, Donald Trump just released a list of terrorist attacks that ultimately disproves his arguments about terrorism more effectively than it proves them. The 78 listed crimes from across the globe span over nearly two and a half years, beginning in September 2014 and ending in December 2016. But the data set is really a cherry-picked fragment of the reality of global terrorism, and a closer look from any angle reveals that Trump's assertions on terror are no more than fear mongering.

The relative infrequency of the attacks is one of the most damaging points against Trump's own argument that unreported terrorism is a rampant problem. If the world is really averaging about 35 terrorist attacks a year like the list indicates, it doesn't seem like a proportional response to ban all people from a few countries where terrorists attacks take place. However, that figure is obviously inaccurate — Trump skewed the data by only including attacks with Western victims. Had he not narrowed the statistical picture to that extreme, terrorism would seem like a problem that primarily affects Asia and Africa, one that the United States needs to help solve.

Some of these attacks, the most salient for Americans being the San Bernardino shooting, also don't fit Trump's claim of having gone underreported by the mainstream media. The San Bernardino attack was all the country could talk about for weeks, and President Obama gave a national address about it. Similarly, with the Nice, France, attack, which captivated global attention — both attacks were handled with due deference and can't be used to fully support Trump's claims. Also refuting Trump's claims, many of the attacks were carried out in Muslim-majority countries there were excluded from the travel ban, some attacks were not even definitively linked to terrorism, and of the three attacks listed that were carried out on U.S. soil, all were committed by American citizens.

Finally, though least importantly, the formatting in this list makes it look like sixth graders are running the White House. The word "attacker" is misspelled 27 times, El Gorah is misspelled multiple times, Denmark and San Bernardino were each misspelled once, and the word "date" precedes the date of an attack one time. One time in the middle. Apparently, no one at the White House has Microsoft Office or Control + V.

There's an element of predetermination that affects everyone's reading of this list. If you like Trump and are scared of Muslims, these crimes are probably just strengthening your support for the ban. If you hate Trump and embrace Muslims, you probably just hate Trump a little bit more now. What the list objectively, inarguably shows is that most Americans' likelihood of being the victim of a terrorist attack is minuscule.

There have always been and will always be bad people in the world, and there's nothing anyone can do to change that. What society can change is how it treats people, whether it presumes them guilty or innocent first. Trump's travel ban presumes guilt without cause, and this list isn't convincing enough to deny people the benefit of the doubt. The list shows that it's worth the risk to welcome refugees, who could cure cancer, pioneer time travel, or just be neighbors and friends in search of a better life.