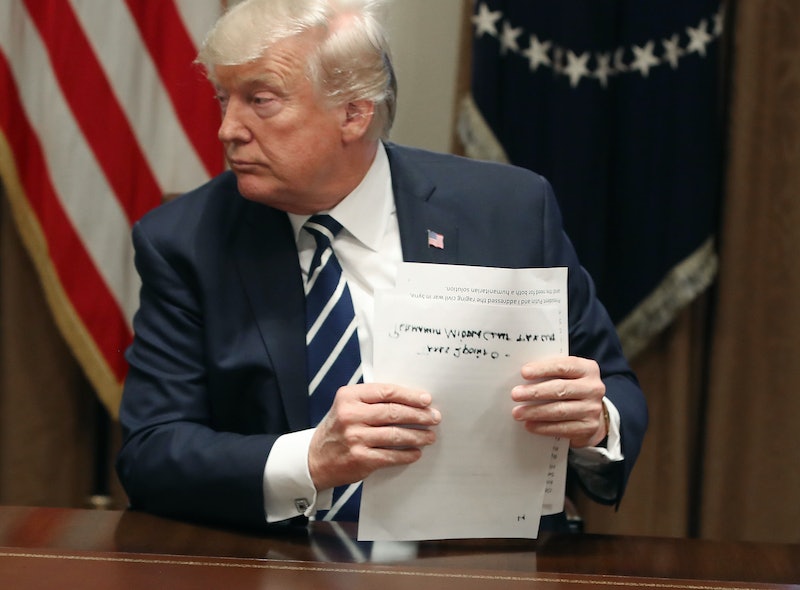 On Thursday, Politico published an in-depth report on Donald Trump's history with Twitter, and revealed that during his early forays into social media, he would scrawl out his tweets in Sharpie for an aide to type up and publish. It's just one of many examples of the long relationship Trump has with Sharpie pens, which predates his political career and persists to this day.

The Politico piece focuses on Justin McConney, Trump's first proper social media manager. It was McConney who, in early 2011, encouraged Trump to embrace Twitter as a means of engaging with fans and drumming up free media coverage for himself. Back then, according to Politico, McConney would print out Trump's Twitter mentions to show him, and Trump would write his responses to them in Sharpie so that McConney could type and send them.

Over time, Trump became more comfortable using the internet himself, and began typing and sending his own tweets. In his interview with Politico, McConney likened this to the scene in Jurassic Park where the velociraptors learn to open doors.

But although Trump's relationship to Twitter has changed over time, his affinity for Sharpie pens has been consistent. He discussed this in an episode of HBO's Axios — and on occasion, Trump's love for thick, black Sharpies has resulted in bona fide news.

In July, while speaking to reporters about a recent summit he'd had with Russian President Vladimir Putin about Russia's election meddling, Trump inadvertently flashed his prepared notes to the cameras present. Scribbled on them in Sharpie were several of the president's annotations, and they were revealing.

In addition to writing "THERE WAS NO COLUSION [sic]" in all-caps, Trump had crossed out a line that said "anyone involved in that meddling to justice." This, as the Guardian noted at the time, suggested that Trump didn't want to publicly commit to punishing people or entities who'd interfered in the 2016 presidential election. Trump also scratched out several other lines from his prepared remarks, including one that criticized people "in Washington who don’t want diplomacy" with America's adversaries.

A similar incident unfolded in February, when Trump met with parents of children who'd been killed in school shootings to discuss gun control. While seated at the meeting, Trump accidentally revealed his notes, again written in Sharpie, to a photographer from Getty. They included what appeared to be a list of questions and responses to the parents in attendance, including, "What would you want me to know about your experience" and "What can we do to help you feel safe?" The last item on the list was, "I hear you," presumably a reminder from the president to himself of how to express empathy to the grieving parents.

Although it isn't clear exactly when Trump first came to embrace the Sharpie, it doesn't appear to be a recent development. Vanity Fair editor Graydon Carter said in 2015 that, ever since he referred to Trump as a "short-fingered vulgarian" in an article 25 years ago, Trump has regularly sent him photos of his own hands in an attempt to prove that they're normal-sized. And what tool does he use to emphasize this?

"On all of them he has circled his hand in gold Sharpie in a valiant effort to highlight the length of his fingers," Carter said.

Trump's love for Sharpies is most likely here to stay. In the first episode of Axios, the president said that when he assumed office, he was issued a "very expensive pen" that "didn't write well." So, he started using a Sharpie instead, and even had the company make him a custom one.

"I called up the folks at Sharpie and I said, 'Do me a favor, can you make the pen in black?" Trump said. "Can you make it look rich?"

He then flashed his custom-made Sharpie to the camera. It was gold-labeled, and had his signature printed on it.

More like this
24 History-Making Black Women You Probably Didn't Learn About In School
By Ayana Lage and JR Thorpe
Matt Hancock’s TikTok Is The Most Matt Hancock Thing Ever
By Sam Ramsden
Twitter Has *A Lot* To Say About The "Single Penalty”
By Sam Ramsden
The Beyhive Is Mad At Harry Styles After Beyoncé’s Album Of The Year Snub
By Jake Viswanath
Get Even More From Bustle — Sign Up For The Newsletter
From hair trends to relationship advice, our daily newsletter has everything you need to sound like a person who’s on TikTok, even if you aren’t.