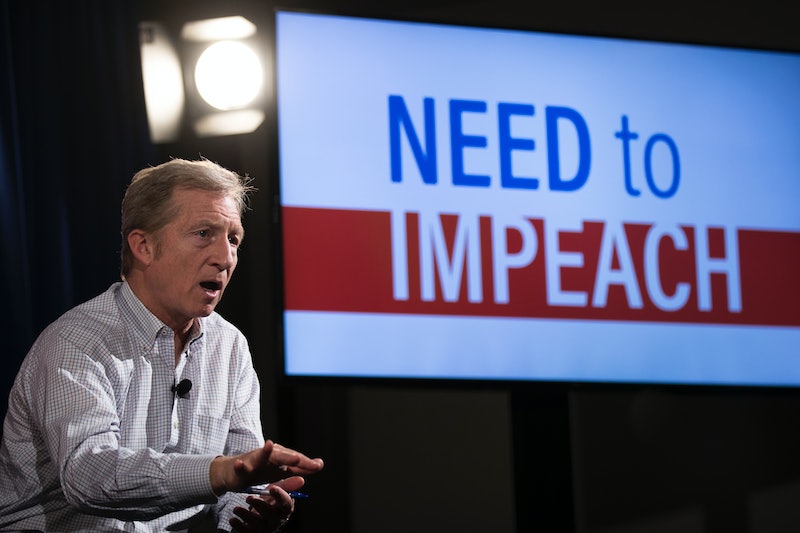 President Donald Trump attacked Tom Steyer on Sunday, tweeting that the Democratic donor "comes off as a crazed and stumbling lunatic." But while the president's penchant for tweeting out personal attacks isn't exactly new, many have questioned his timing. Trump attacked Steyer days after a suspicious package was found addressed to the megadonor.

"Just watched Wacky Tom Steyer, who I have not seen in action before, be interviewed by @jaketapper," Trump wrote in a tweet. "He comes off as a crazed & stumbling lunatic who should be running out of money pretty soon."

In his tweet Sunday, the president went on to dismiss the idea that Steyer, who has so far only said publicly that he hadn't ruled out a 2020 presidential bid, might become the Democratic Party's presidential nominee. "As bad as their field is, if he is running for President, the Dems will eat him alive!" Trump said.

But a number of Twitter users criticized Trump's attack on Steyer, calling it insensitive and a perfect example of how the president's rhetoric helps to fuel political violence such as the mail-bomb plot foiled earlier this week. "Days after a fan of President Trump sends a pipe bomb to Tom Steyer, Trump steps up — not to reach out to Steyer, but to pour on more hate," New York Times columnist Nicholas Kristof tweeted. "Instead of expressing shared humanity, he derides Steyer as a 'stumbling lunatic.' Mr. President, we all reap the hatred you sow."

"I wonder why a Trump fan mailed Steyer a bomb the other day," film director Michael Bonfiglio mused sarcastically in a retweet of Trump's tweet.

Steyer also pushed back on Trump's remark. In a tweet posted shortly after Trump's, Steyer condemned the president for spending his time launching personal attacks in the wake of "the horrible political violence" seen this week. "[Trump] just tweeted at me in his typical insulting style after watching @CNNSotu," Steyer said. "It is unthinkable that in the midst of the horrible political violence our president would resort to name-calling instead of repairing the damage to the fabric of our country."

A suspect was taken into custody Friday, federal investigators have reported.