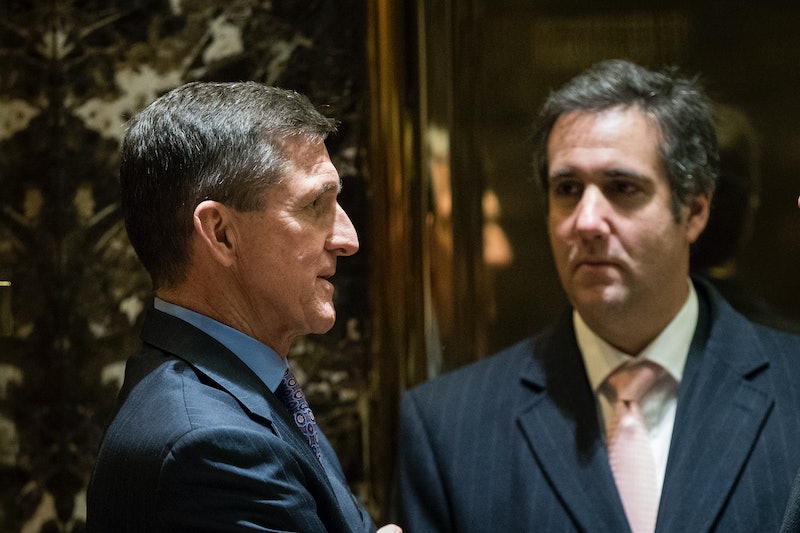 President Donald Trump began posting early morning "no collusion!" tweets ahead of another former aide being sentenced for lying to federal investigators. Interestingly, the tone the president has used depends on which former associate is headed to court. On Tuesday, Trump's "good luck" tweet to Michael Flynn underlined how much harsher the president's tone has been with Michael Cohen.

"Good luck today in court to General Michael Flynn," Trump tweeted early Tuesday morning to his former national security adviser. "Will be interesting to see what he has to say, despite tremendous pressure being put on him, about Russian Collusion in our great and, obviously, highly successful political campaign. There was no Collusion!"

This comes in great contrast to his most recent tweets about Cohen, in which he called his former attorney and fixer a "rat." Earlier this month— before Cohen's sentencing — Trump wrote, "'Michael Cohen asks judge for no Prison Time.' You mean he can do all of the TERRIBLE, unrelated to Trump, things having to do with fraud, big loans, Taxis, etc., and not serve a long prison term?"

Cohen was sentenced to three years in prison for crimes that include making illegal hush money payments to Stormy Daniels and former Playboy model Karen McDougal. Cohen says he made the payments at the direction of the president, which Trump has denied on Twitter.

Flynn, on the other hand, is likely to receive far less time. Flynn pleaded guilty to lying to the FBI about his communication with then Russian ambassador Sergey Kislyak; he also agreed to cooperate with special counsel Robert Mueller's investigation. Prosecutors have called for little to no jail time.

The warm treatment towards Flynn is nothing new. Since Flynn was first charged with lying to federal investigators, Trump has implied that the retired Army lieutenant general is being treated unfairly. He compared Flynn to others the FBI has questioned, like Hillary Clinton, and bemoaned how the man's "life is destroyed."

He also implied Flynn didn't commit any crimes — even in tweets where the president acknowledged the lies to the FBI. "I had to fire General Flynn because he lied to the Vice President and the FBI," Trump wrote in December 2017. "He has pled guilty to those lies. It is a shame because his actions during the transition were lawful. There was nothing to hide!"

When it comes to Cohen, the president has spoken with what could be described as derision. He's implicitly criticized his former lawyer and fixer of breaking under pressure from the feds. "If anyone is looking for a good lawyer, I would strongly suggest that you don’t retain the services of Michael Cohen!" Trump tweeted in August.

Trump has also derided Cohen's attempts to get less jail time in advance of his sentencing and implied Cohen is lying to investigators to do so. "He makes up stories to get a GREAT & ALREADY reduced deal for himself," Trump wrote in one tweet in early December. "Cohen just trying to get his sentence reduced. WITCH HUNT!" Trump added in another.

Flynn's Tuesday sentencing hearing is set to start at 11 a.m. ET. Whether Flynn is treated nicer by the judge, too, remains to be seen.