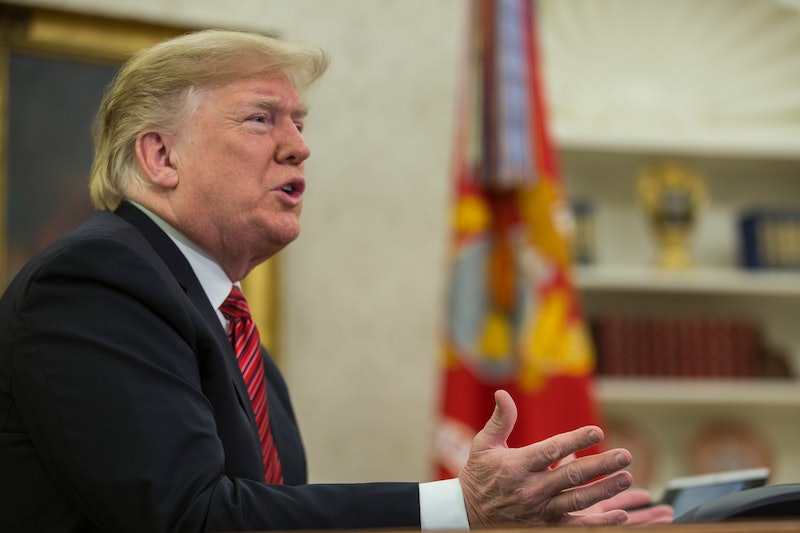 Published just one day after he appeared to guilt-trip Americans for partying on New Year's Eve, President Donald Trump's new year tweet was an all-caps greeting to everyone on Twitter — even "the haters and the fake news media." He also called on his followers to "just calm down and enjoy the ride," suggesting that 2019 would be a "fantastic year" for certain people.

"2019 WILL BE A FANTASTIC YEAR FOR THOSE NOT SUFFERING FROM TRUMP DERANGEMENT SYNDROME," Trump tweeted. "JUST CALM DOWN AND ENJOY THE RIDE, GREAT THINGS ARE HAPPENING FOR OUR COUNTRY!"

The president's tweet came on the heels of a New Year's Eve video message from the White House in which he told Americans that they were "out there partying" while he was "at the White House working." In case anyone felt guilty, however, Trump reassured his followers that he didn't blame them for celebrating.

Trump's decision to extend his New Year's greeting to "the haters" echoed his past end-of-year tweets; in 2014, he wished a happy new year to "all haters and losers," and in 2016, he addressed his "many enemies and those who have fought me and lost so badly they just don't know what to do." 2017's tweet, meanwhile, included a similar message to his "enemies, haters, and even the very dishonest Fake News Media."

This is also not the first time that the president has alluded to "Trump Derangement Syndrome." According to The Atlantic, Trump and his supporters have referenced this particular "syndrome" in response to calls for impeachment and other criticisms of the president. Trump's supporters have also used "Trump Derangement Syndrome" to draw attention to what they feel are overreactions to Trump's actions, rather than the actions themselves.

Just over an hour after Trump tweeted his all-caps message to celebrate the beginning of 2019, he published a much simpler greeting, wishing a "Happy New Year!" to his followers. According to NBC News, Trump rang in the new year in Washington, D.C. He reportedly had plans to spend the holidays in Florida, at his private Mar-a-Lago resort, but changed course when a partial government shutdown began on Dec. 22 — a shutdown that Democrats have accused him of promoting.

On Monday, House Democrats unveiled bills to fund the Department of Homeland Security until Feb. 8 and other government agencies until the end of the fiscal year. They also announced that they planned to call for a vote to end the shutdown on Thursday, when they take control of the chamber, NBC News reported. However, Trump denounced the Democrats' proposed plan on Twitter because it did not include the funding for a southern border wall that he has been demanding, even as the government shutdown continued into the new year.

According to NBC News, Senate Republicans are unlikely to pass the Democrats' proposed plan, or any other plan that they don't expect Trump to sign. The government shutdown is currently in its 11th day, but the president's New Year's Day tweets indicate that he is counting on the partial government shutdown to result in funding for the border wall on which he campaigned.