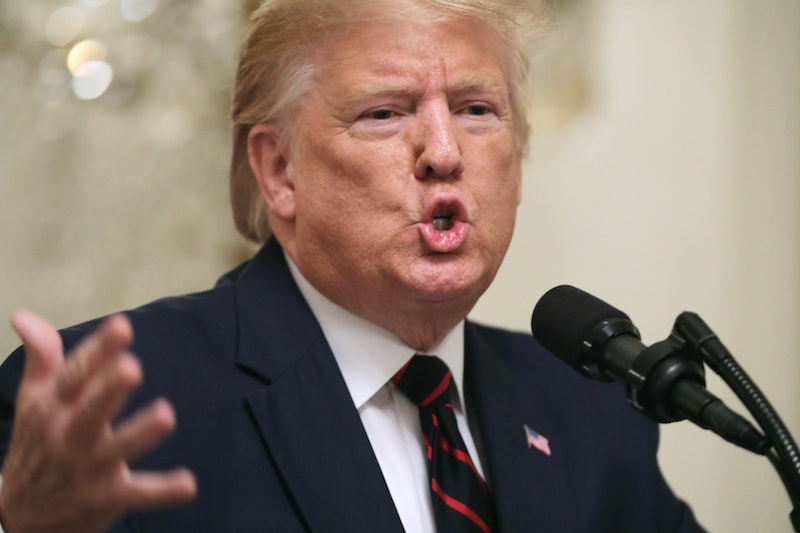 Donald Trump's followers are not able to "look at this photograph," or more specifically, look back at the Nickelback meme that he posted in an attempt to attack Joe Biden. Donald Trump's Nickelback video was removed for copyright infringement. And while the deletion was due to a copyright claim from an unknown party, Twitter users are celebrating the move by welcoming Nickelback to the #Resistance. Members of Nickelback have not commented on the tweet or the subsequent copyright complaint. Bustle reached out for representatives of the band, but have yet to receive a response.

The video in question took aim at Joe Biden, opening with an interview clip of the former vice president denying that he had ever discussed foreign business deals with his son Hunter. The clip then swiftly transitioned into an altered version of a niche Nickelback "Photograph" meme, in which the picture that lead singer Chad Kroeger holds up in the band's music video is replaced — usually with something funny. In this case, the image was edited to show a photo of Vice President Biden, his son Hunter, and Devon Archer, a colleague of Hunter's who was labeled as a "Ukrainian gas exec" in the clip, as reported by The Guardian. "LOOK AT THIS PHOTOGRAPH," Trump tweeted alongside the video.

According to The Hill, the meme had been going viral within conservative media prior to Trump's reposting of it. The video was taken down within 12 hours of it being posted. In the section where the video appeared, Trump's tweet now reads, "This media has been disabled in response to a report by the copyright owner." However, the media sadly still lives on in another form as the video has now been reposted on YouTube.

It's not known whether the copyright claim was filed by members of Nickelback themselves, their record label, or another third party. But that hasn't stopped many Twitter users from celebrating the now defunct video as a major political statement from a band that is very divisive in pop culture. But most importantly, people are loving the fact that Trump was seemingly dissed and, in some way, defeated by Nickelback.

Reporter Andrew Feinberg apparently saw this hilarious situation coming, writing, "As I predicted, @realDonaldTrump appears to be the first American President to be dissed by @Nickelback." On the contrary, Vox writer Ian Millhiser seemed as shocked as everyone else, joking, "All this time, Nickelback has been good."

However, many people were simply impressed that the move managed to transform an often derided band into political heroes, whether it was intentional or not.

This isn't the first time that one of Trump's tweets has been thwarted due to copyright infringement. As reported by Variety, Warner Bros. took legal action against Trump after he retweeted a video that used music from The Dark Knight Rises score in April. In this case, the clip was a fanmade video for Trump's 2020 election campaign that used Hans Zimmer's "Why Do We Fall?," as well as the same font used in the film's title cards.

Similar to the Nickelback incident, Twitter removed the video after the company filed a copyright claim. “The use of Warner Bros.’ score from ‘The Dark Knight Rises’ in the campaign video was unauthorized,” a Warner Bros. spokesperson told Variety at the time. If it isn't clear by now, nobody is above copyright law, even Trump.

More like this
Twitter Has *A Lot* To Say About Justin Timberlake’s Beat Ya Feet Dance
By Sam Ramsden
Fans Think Beyoncé’s “Break My Soul” Is Calling For A New Great Resignation
By Sam Ramsden
BTS Announced An Indefinite Hiatus & The ARMY Is Freaking Out On Twitter
By Sam Ramsden
Here’s How Lizzo Is Supporting Abortion Rights After The Roe v. Wade Reversal
By Brad Witter
Get Even More From Bustle — Sign Up For The Newsletter