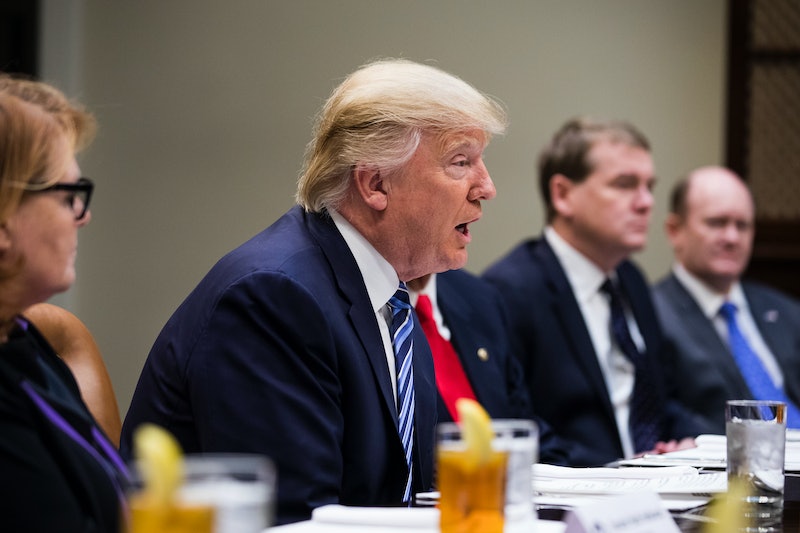 President Donald Trump has now apparently decided not to break ranks with all of the American presidents since Carter and to honor the "one China" policy, which states that there is only one China, and Taiwan is not a separate country. However, that's not what Trump said about the "one China" policy in the past. After taking a call from the president of Taiwan shortly following his election, Trump made some pretty strong statements about where he stood on the whole "one China" thing, and they weren't exactly to Beijing's liking.

"I fully understand the 'one China' policy, but I don't know why we have to be bound by a 'one China' policy unless we make a deal with China having to do with other things, including trade," he said during an interview on Fox News. He went on to say that he didn't approve of other Chinese actions, like their trade policies with America or their stance toward North Korea.

Trump gave this interview in December, and it immediately perturbed officials on both sides of the Pacific. The Obama administration confirmed their support for "one China," while Beijing laid out a series of warnings for Trump. However, he now seems to have given the matter a second look — and come down firmly on the side of "one China," without China having to do anything to make him change his mind.

While this is no doubt good for the sake of peace in the South China Sea and elsewhere, it doesn't say much about Trump's supposed negotiating abilities. "The end result is that Trump just confirmed to the world that he is a paper tiger, a 'zhilaohu' — someone that seems threatening but is wholly ineffectual and unable to stomach a challenge," said James Zimmerman, a lawyer and the former head of the American Chamber of Commerce in China, Reuters reported.

Basically, Trump blustered about standing up to China in December, perhaps heard some of the outcry afterwards, and then immediately reverted to the United States' previous position as soon as China asked for it. Let me repeat: This is a good thing. The U.S.-China relationship is both incredibly important and very delicate. But if you're a president who ran on your unparalleled ability to negotiate, is this really how you want to start out your administration?

In a perfect world, Trump never would have made those comments about the "one China" policy in the first place. But he did, and now the outcome is more embarrassment for him and for the people who he is pledged to represent. China, a communist state that largely controls its media, is well-versed in the art of fake news — and Trump's not going to be able to play off this misstep as something that never happened.