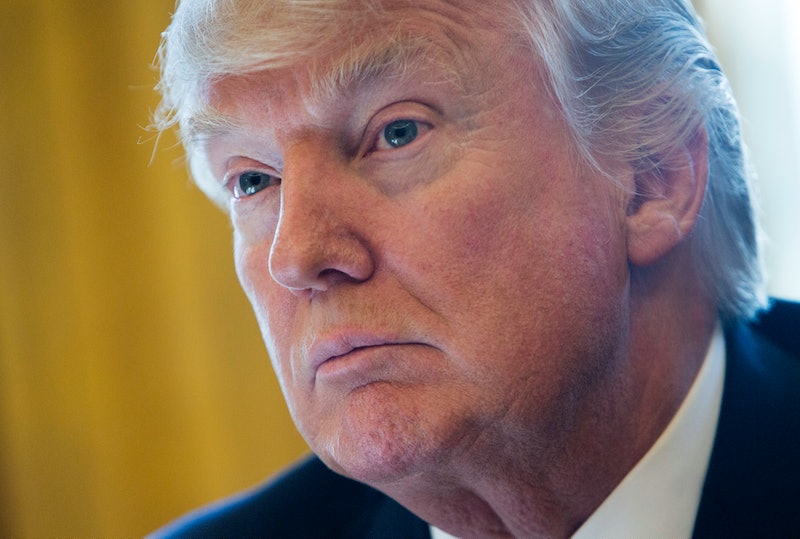 In one of the most high-profile court decisions in years, a three-judge panel on the Ninth Circuit Court of Appeals ruled against President Trump's travel ban, dealing a serious blow to the administration's immigration restrictions. A lower court had issued a temporary block of the ban, and the Ninth Circuit upheld that ruling, thus preventing the policy from being implemented nationwide. The president quickly weighed in, and Trump's response to the court's travel ban ruling is, well, pretty close to what you might expect.

"SEE YOU IN COURT," the president tweeted in all caps. "THE SECURITY OF OUR NATION IS AT STAKE!" Later, Trump told NBC News that the court's ruling was "a political decision."

Prior to the Ninth Circuit's decision, several other courts had blocked isolated components of the ban. But the specific case under consideration here, filed by the Attorneys General of Washington and Minnesota, was the most far-reaching. Earlier, a U.S. District Court blocked the travel ban in its entirety nationwide, and that's the ruling that the Ninth Circuit upheld on Thursday.

“[T]he Supreme Court has made clear that the Government’s authority and expertise in [such] matters do not automatically trump the Court’s own obligation to secure the protection that the Constitution grants to individuals, even in times of war," the panel ruled, adding that the federal government's argument "runs contrary to the fundamental structure of our constitutional democracy."

The ruling wasn't a huge surprise. The court heard arguments in the case on Tuesday, and while trying to predict a ruling based on the arguments is often a fool's errand, observers broadly concluded at the time that the judges seemed skeptical of the government's arguments in favor of the ban.

But this isn't the end of the legal battle over the ban on immigrants from seven Muslim-majority countries, not by far.

For one, the effect is not necessarily permanent. The ruling that was upheld today determined that Trump's travel ban should be blocked temporarily while the courts consider the merits of the policy. That process still needs to play out, and it's entirely possible that the travel ban will ultimately be allowed to proceed after the courts hear extended arguments.

This uncertainty notwithstanding, Thursday's ruling is a big deal. For one, the Supreme Court does give weight to lower courts' rulings while hearing appeals. In addition, thanks to the empty seat on the court, there's a very real possibility that the justices will reach a 4-4 tie on the case. When that happens, the lower court's ruling stands, so it matters quite a bit that the Ninth Circuit ruled against the administration.

Although the legal dispute over the travel ban is far from over, Thursday's ruling was a huge win for opponents of the ban, and just as big of a setback for the young Trump administration.