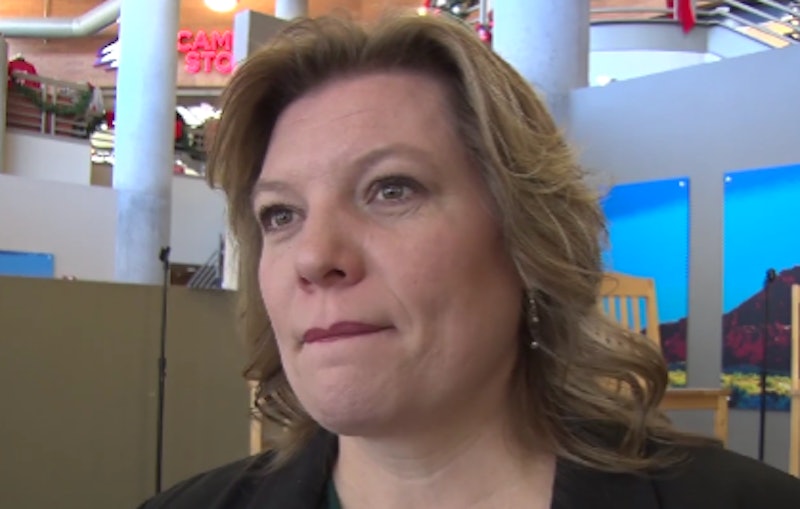 The small town of Hildale, Utah, is currently completing a major shakeup of its local government and municipal staff, and for a very particular reason. Namely, because Hildale's new mayor, Donia Jessop, is a woman, and not a member of the polygamist sect that previously had control over the town and its local government.

Jessop, who won election in November 2017, is the first woman to ever serve as Hildale's mayor, and also the first non-member of the polygamist religious sect to do so. The sect in question is the Fundamentalist Church of Jesus Christ of Latter-Day Saints (FLDS), an offshoot of the Church of Jesus Christ of Latter-Day Saints (LDS), more widely known as the Mormon church. While mainstream Mormonism has renounced polygamy for more than 120 years ― polygamy is the practice of being married to multiple spouses at one time ― sects like the FLDS still embrace it.

As the Associated Press detailed Friday, after Jessop was elected and sworn into office, six of the town's seven municipal workers tendered their resignations, as well as nine members of other town-related boards. One of them, former utility board chairman Jacob Jessop (who is distantly related to the mayor through her husband, according to the AP) reportedly gave the following explanation in his letter of resignation.

"It has come to a point where I have to choose between my religion and participation in city government, and I choose my religion," Jacob wrote, in a letter obtained by the AP. "My religion teaches me that I should not follow a woman for a leader in a public or family capacity."

The resignation letter also made an unfavorable reference to "apostates," a word for people who renounce their religious faith. Jessop, along with her family, reportedly left the FLDS about four years ago. Throughout her campaign, she made it clear that turning Hildale into a more conventional and secularly goverened town, rather than a haven for the FLDS, was a priority for her.

"The things that were happening in the church were so destructive. And now that destruction can stop, and we can start to rebuild," Jessop said, prior to her election.

According to the AP, when reached for an interview by phone, Mayor Jessop had quite a reaction to the former Hildale utility chairman's resignation letter, expressing surprise at how "blatant" it was.

"I knew that that was out there, but for it to be so blatant, spelled out so perfectly, it was quite a shock," she reportedly said. "If you cannot work with me, then it's good that you are moving on because this is the future of Hildale and I'm not going anywhere." Prior to Jessop's election, Hildale had been effectively controlled by the FLDS for more than a century, since its founding in 1913.

The leadership of the FLDS is also hyper-controversial, as its president is a man who's currently in prison on a life sentence for sexually abusing underage girls. Warren Jeffs, 62, is a convicted child molester, and is currently serving life plus 20 years; Jeffs was convicted on child sexual assault charges in 2011. He was also convicted of two counts of felony rape as an accomplice in 2007, but that conviction was ultimately overturned due to the jury having received incorrect instructions.

Hildale, with an estimated population of 2,726, according to the 2010 U.S. Census, sits very close to the state of Utah's southern border with Arizona. The FLDS has controlled Hildale for generations, but that's not the only border town the church has taken residence in ― it's also historically been based out of Colorado City, Arizona, a sister city to Hildale just across the Utah-Arizona border.