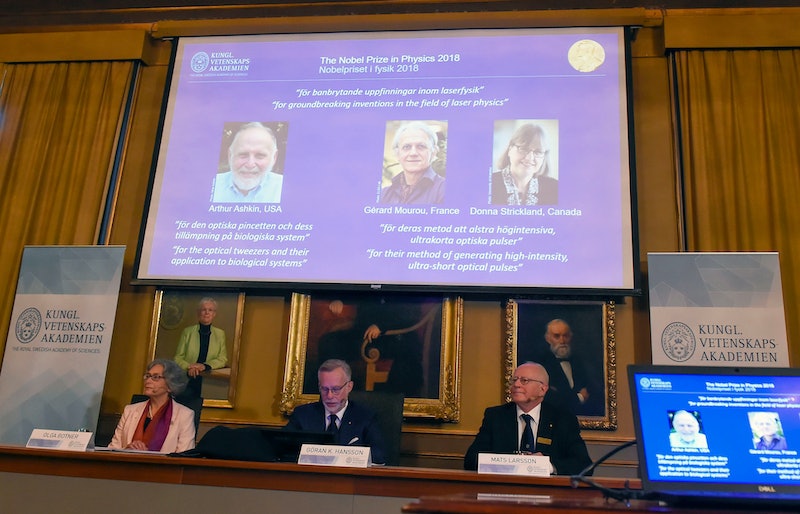 It was announced this morning that Dr. Donna Strickland, a Canadian physicist who is currently an Associate Professor at the University of Waterloo in Canada, has been awarded the 2018 Nobel Prize for Physics along with two fellow physicists, Dr. Arthur Ashkin and Dr. Gérard Mourou. Not only is it the first time a woman has won the Nobel for physics in 55 years, but Strickland joins an elite company of only three women who've earned the world's top honor for physics, alongside Marie Curie in 1903 and Maria Goeppert-Mayer in 1963.

Strickland, Ashkin, and Mourou were given the award "for groundbreaking inventions in the field of laser physics." Specifically, Strickland and Mourou invented a procedure called Chirped Pulse Amplification (CPA), which is a way of "amplifying" an incredibly short laser pulse up to maximum power. (Mourou also happened to be Strickland's PhD advisor at University of Rochester, according to the BBC.) These days, the technique is used in cancer research and optical medical care.

Strickland, who has described herself in the press as a "laser jock," told the BBC that she found it "surprising" that it had been so long since a woman had won the Nobel for physics, and stressed that she had always felt treated as an equal in her laboratories and research. .

Despite these comments, the award raised questions among the scientific community about the treatment of women in STEM. Several scientists noted on social media that Strickland, despite now being the recipient of the most expensive and impressive prize in science, is an associate professor, rather than a full professor, at the University of Waterloo in Canada. "She is an associate professor, but she does have tenure," Matthew Grant of the University of Waterloo told BuzzFeed News.

The lack of women in positions of power in STEM academia is a major issue in the community. In 2016, the National Science Board reported that women comprised only "24 percent of full professors, 38 percent of associate professors, and 45 percent of assistant professors" in Science and Engineering fields. These numbers "rose substantially between 1973," when only 11,000 women worked in these fields in academia, and 2013, when these statistics were measured.

The Nobel announcement also comes days after an Italian professor's "highly offensive" lecture at Cern, the European Nuclear Research Center, in Geneva, Switzerland. Professor Alessandro Strumia of Pisa University claimed that "physics was built by men" and that male scientists were being discriminated against, among other sexist comments. Strickland herself told the BBC that she thought his talk was "silly."

Fortunately, women in STEM are stepping up to try and shift the structures that contribute to the "boy's club" of STEM academia. Dr. Jocelyn Bell Burnell made huge waves earlier this year when she won a $3 million research prize — and immediately made it into a fund to create scholarships for underrepresented minorities to study physics.

Dr. Strickland is now in some elite company; Curie famously went on to win another Nobel for chemistry in 1911. Let's hope, however, that the group of women who've collected the Nobel Prize for physics starts being a bigger club.