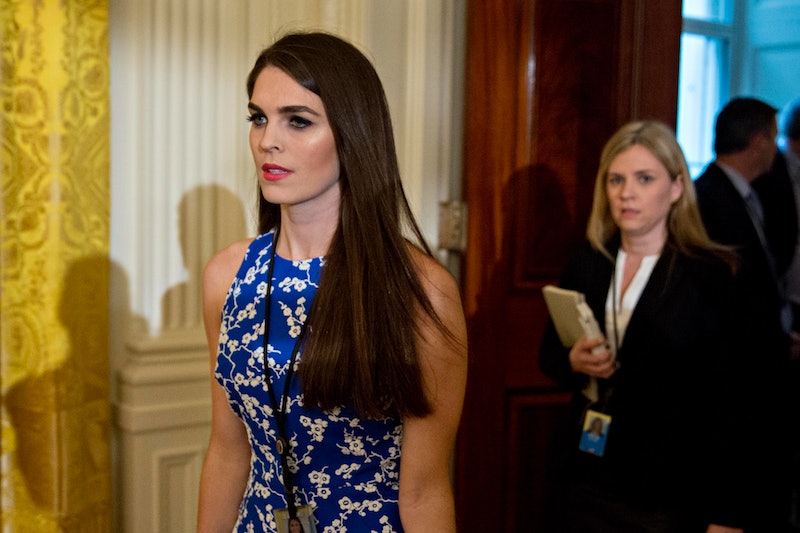 On Friday, following weeks' worth of hints dropped by a gleeful Michael Wolff, Nikki Haley was forced to deny that she was having an affair with President Trump. Trump's ambassador to the UN called Wolff's implication "disgusting" in a podcast interview with Politico, adding, "I am never alone with [Trump]." In the one year Trump has been president, many of the women in his inner circle — Hope Hicks, Kellyanne Conway, and now Haley — have faced speculation that they, too, are having an affair with Trump.

Every time we suggest that an attractive, successful woman must have gained a position of power in Trump's administration through romantic means, we undermine her. We suggest that being attractive and young — at least, younger than Trump — is these women's form of currency, and more valuable than any skills or experience. We strip their success of meaning, and we relegate them to a stereotype. It's no surprise, in Hope Hicks' case at least, that the best response to these rumors seems to be: Stay quiet. Stay out of the way.

Look, I get it. For Trump's opponents, who see him as a boorish misogynist, having an affair with a staffer feels like something he would do. Plus, Trump is no stranger to affairs, even prior to the Stormy Daniels brouhaha. Not to mention, if you're ideologically opposed to Conway and Haley's positions — let's say, if you think the UN under Haley shouldn't have voted "no" to a measure condemning the death penalty for being gay; if you disagree with Conway's "alternative facts" — then it's easy to see them as villains.

Whatever you think of the politics of Kellyanne Conway, Hope Hicks, and Nikki Haley, all signs point to them being great at their jobs. Conway spearheaded an ultimately successful presidential campaign (I mean, have you ever seen a person defend a politician with such conviction?). Nikki Haley is a well-established political maven, and enjoyed bipartisan success long before she met Trump. As for Hicks, she's one of the most influential women in politics. She's 29 years old.

Whispers about one of the three being romantically involved with Trump might have stayed that way, if it hadn't been for Michael Wolff. In Fire & Fury, Wolff took pains to drop salacious hints about the relationship between both Trump and Hicks and Trump and Haley. (The White House has described the book as "fake," and denied many of its claims.) From page 498:

Many on the president’s staff took particular notice of one of the few remaining Trump opportunists: Nikki Haley, the UN ambassador. Haley—“as ambitious as Lucifer,” in the characterization of one member of the senior staff—had concluded that Trump’s tenure would last, at best, a single term, and that she, with requisite submission, could be his heir apparent. Haley had courted and befriended Ivanka, and Ivanka had brought her into the family circle, where she had become a particular focus of Trump’s attention, and he of hers.

On his subsequent book tour, Wolff was open about his strong sense that Trump was having an affair. "I didn't have the 'blue dress'," he told Bill Maher of not having enough proof to say so explicitly in Fire & Fury. "Now that I’ve told you [the truth], when you hit that paragraph, you’re gonna say 'bingo'," he continued.

Thus started a rabid hunt for the paragraph to which Wolff referred. Observers claimed that it was most likely to refer to either Haley or Hicks.

Which brings us to Haley, who was affected enough by the rumors to address them directly: "I’ve never talked once to the president about my future, and I am never alone with him," she told Politico. (There's more than a hint of Mike Pence in there, in regard to the theme that wily women can't seduce innocent men if they're never left alone with them.)

This isn't even a first for Haley: Before she was elected governor of South Caroline, rumors that she was involved with political bigwigs Mark Sanford and/or Larry Marchant threatened to derail her campaign. From beginning to end, Haley has insisted she is happily married. Yet, her opponents imply, over and over, that a woman — a woman of color, no less — cannot be that successful, that powerful, and that goddamn good at her job without sleeping with a man to get there.

Let's be clear: You're not sexist if you believe that Trump to be perfectly capable of cheating on Melania, or even cheating with someone on his payroll. You're also not sexist if you fundamentally disagree with Haley's politics, Conway's "alternative facts," or Hicks' complicity. But it is sexist to suggest that successful women in Trump's orbit are only there because they're sleeping with him.

When you assume that these women are successful because they were romantically involved with Trump, or promoted because they were attractive, or rose to political prominence on the tails of the men in their lives, you do them a disservice. There is not a shred of evidence that any of these three women, nor any other women, became professionally successful simply by acquiescing to Trump's sexual demands. You may not like Trump, and you may not like them — but give them the credit they deserve.