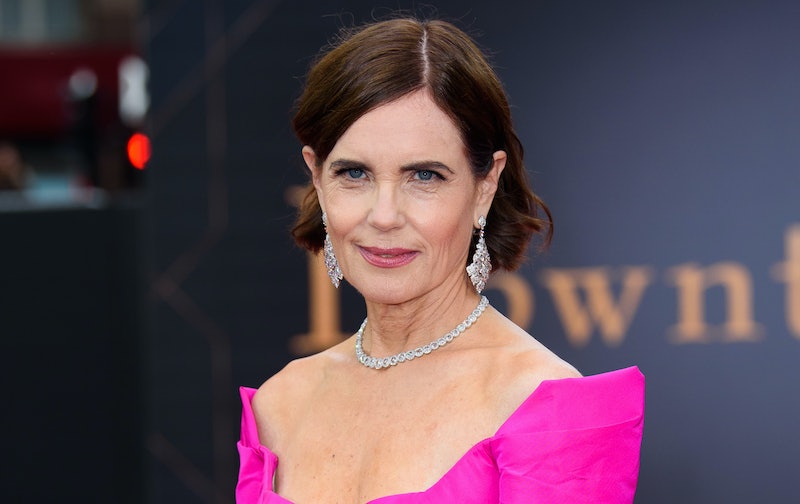 Downton Abbey is back and arguably there's no better time for it. The drama that aired on ITV on Sunday nights from 2010 to 2015 was prime fodder for cosy viewing. Its politics were often iffy (it isn't exactly easy to root for the landed gentry) but it's soapy style and familiar characters made it appointment viewing. Now the characters viewers knew and loved have returned in feature length format. While I personally would love to see it back in its Sunday slot for a full run, I certainly won't say no to a few hours' of escapism, clunky politics aside, in the cinema with Carson, the Dowager, Anna, and Lady Mary for company.

Ahead of the Downton Abbey film's release on Sept. 13, I spoke to Elizabeth McGovern who plays Cora Crawley, the Countess of Grantham about whether she still remembers her way around the set, the future of the great house, and whether the series will ever return. Consider yourself warned — there are major spoilers for the movie ahead.

AGC: How did it feel to be back on set after so many years?

EM: It was very buzzy to begin with and then it felt as though we'd never left. It was very easy to just slide back into all the old rituals and the dynamics between people.

AGC: Obviously the house that's used for Downton is huge, did you still remember your way around?

EM: Yes. It's a bit deceptive because although it looks like we're permeating the entire house, we're really just in the front four rooms, so it's not very hard to work your way from one to another. There's still this big mysterious back section that I'll never know. It will always be a mystery for me.

AGC: This is probably a little bit like having to pick your favourite child but who were you most excited to see back on set out of your cast members?

AGC: It must be exciting to have different avenues to explore with them.

EM: Yes, they're really appreciated those guys who come in we really are very happy to see them.

AGC: Times are changing are Downton, we kind of get a sense of who's going to be looking after it in the future. How do you think Cora feels about that?

EM: It was an odd tradition that I would find to be very uncomfortable today. But it was just taken as a matter of course that in these large estates the woman would begin by being the head of the estate and running everything and then would expect her children when they grow up and marry to take over the estate, to take over the running of her own house. It seems like a really strange idea now that your children will grow up, stay living with you, and then start to call all the shots. It's an idea that would make me very uncomfortable now but to Cora's credit she seems to deal with it very graciously. She seems to very much know her place. And, of course, you look at the Dowager and she did the same thing. I mean Downton Abbey was once her kingdom, her serfdom that she reigned and now she's retired to quite a nice house, but it's a lesser house on the estate. It was just what people did.

AGC: Cora always seems very unflappable, is that something that you identify with?

EM: No, I'm not at all like that. In fact when it comes to anything domestic I'm usually the first to go under when something goes wrong so that is just sheer acting, so when it comes to winning awards I should definitely be in the running for every one. I guess the fact that she's relegating her responsibility makes it easier for her. It's not her problem.

AGC: You put in a little guiding hand with Edith at the end of the film, tell me about that.

EM: That's the thing about Cora — even though she seems quite passive, when push comes to shove you can trust she'll do something in her very subtle way. She'll get in there and massage a situation so that it works. It's singular that it's the women that will make it work to everyone's advantage. Now we have women's lib and have earned ourselves a lot of rights which I am completely behind, don't get me wrong. But in the old days women learned how to manifest their power in the home, around the hearth, or in the bedroom. That was just a different way of doing things. You find ways.

AGC: At the end of the film there's a really sad moment, when we find out the Dowager hasn't got too much longer to live. We don't obviously see your character react to that news it's more a moment shared between the Dowager and Lady Mary but how do you think that's going to affect the family and Cora personally?

EM: Well, given the history of Downton Abbey, I wouldn't be surprised if she didn't bounce back. So I'm going to save my tears. But you'd be prepared for it, of course, with somebody that age. And, of course, you'd feel a lot of sorrow too because it's not only her but it's everything she represents in terms of their shared memories.

AGC: What do you see the future holding for Cora, Robert, and the family more generally?

EM: Well times are changing for women and I see that manifest in her daughters. I suspect they'll continue in that vein and I suppose that the march of time will start to catch up with the way of life that Downton represents because that's what it did. Whether or not that happens sooner or later is anybody's guess. I think that Cora will be able to adjust to changing times. I think it's in her character to be very flexible and hopefully she'll help Robert, because I don't think it's in his character. But it might be Cora who helps the family through the inevitable transition.

AGC: In terms of a sequel or a return of the series, what are your thoughts about that? Would that be something that you'd be interested in being involved in or do you feel that was a good place to end it?

EM: I would always just hope that we don't do it just for the sake of it. That there is something that we're actually feeding people rather than just taking their money. That would be my ambition. If we've still got something left to give. We'll see.

AGC: We're living in quite challenging time at the moment, times of change, what do you think your character would make of the changes we're seeing at the moment?

EM: Well I think it is a stressful and depressing time to be alive frankly. And I don't think Cora would be any different to the way a lot of us are feeling. I do think there is a happy ending because I'm optimistic and a positive person. And I think that what we're looking at is probably inevitable. The seeds were being planted decades ago and we just weren't aware of it. There probably is something that will come of it all that will probably make the world a better place but I feel that we are in very very dark times, and I think Cora would as well.

AGC: I think that's why it's such a nice time to have Downton back because it's exactly the kind of viewing that you need during these times.

EM: And also just to be reminded that we can be decent to one another. We can have different points of view and still get along and find things to like about each other. And in some ways the world that Downton represents is a conservative point of view and it's a throwback in time but there are nice people that feel that it's the right way to proceed. They're not all ogres. This criminalising everyone for their political point of view. You know, "If you feel this way, you obviously have no right to be alive and you're evil in your intentions." It's gotten to such an extremely deep divide, which may be authentic but it isn't helpful, you have to find a way to move forward.