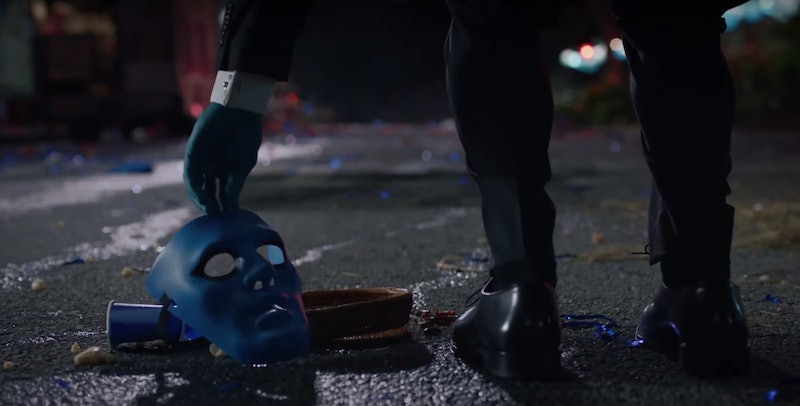 Damon Lindelof's Watchmen may not be a direct sequel to Alan Moore's graphic novel, but the comics' fan favorite Dr. Manhattan will be in the HBO series, per Esquire. The characters Laurie Juspeczyk and Adrian Veidt, played by Jean Smart and Jeremy Irons respectively, play major parts in the series — but Dr. Manhattan's role is more mysterious. Given Dr. Manhattan's Watchmen origin story, however, that actually isn't too surprising. Staying out of the action is kind of his brand.

In the Watchmen comic, nuclear physicist Jon Osterman became the blue-skinned Dr. Manhattan after a radioactive accident. Unlike the rest of his disbanded team of heroes who mostly rely on strength and skill, Dr. Manhattan has superpowers. He can teleport, move things with his mind, see the future, time travel, fly... you name the power, he's probably got it. He chooses to mark his forehead with a hydrogen atom symbol when he creates his "look" and starts working for the United States government as a hero. (In a move that would make Marvel's "Team Cap" shudder, un-registered superheroes in this universe are illegal.)

Watchmen is overall pretty cynical in tone, but Dr. Manhattan needs more convincing than most that people are even worth saving. His super-intelligence causes him to become aloof to a fault, and he slowly loses touch with humanity. When he needs to be alone, he literally teleports off to planet Mars — how much more isolated can you get? At the end of Moore's graphic novel, Dr. Manhattan departs Earth yet again in order to find a "simpler" galaxy.

The San Diego Comic-Con trailer for HBO's new series (above) depicts not only civilians dressing up as Dr. Manhattan, and reports of the legendary figure spotted on Mars, but a suspicious blue hand reaching for a mask back on Earth. If that's really him, why has Dr. Manhattan returned to Earth? He could be back to judge what has become of humanity in the wake of Ozmandias/Adrian Veidt's success. (The villain essentially wins at the end of Watchmen. Told you it was cynical.) His return might have something to do with his former love interest from the graphic novel Silk Spectre II, also known as Laurie.

While the HBO series is an adaptation of Moore's comic universe, Dr. Manhattan has actually been written into a lot of other DC comics in recent years. Not many Watchmen characters have made that crossover. He was an antagonist in 2016's DC Universe Rebirth, made a cameo appearance in a 2017 volume of The Flash, and was the focus of the official Watchmen sequel "Doomsday Clock," which also features DC comics characters like Superman, Joker, and Wonder Woman.

Lindelof assured fans that his Watchmen won't overlap with "Doomsday Clock," per Esquire, but it is interesting to consider the many forms that Dr. Manhattan has taken in various comics — particularly the fact that he briefly became an antagonist. When the cerulean loner returns on the HBO series, fans may be thrilled to see him — but he may not be one of the good guys, especially if the world he's returning to is run by Ozmandias.

More like this
Here's How To Stream 'Downton Abbey: A New Era' & The New 'Downton' Channel
By Alice Broster and Sam Ramsden
'The Summer I Turned Pretty' Book Ending Is An Emotional Rollercoaster
By K.W. Colyard
The Future Of 'All Creatures Great & Small' Is Confirmed & Wedding Bells Are Ringing
By Rebecca Fearn and Frances Stewart
A New Season Of The Midwich Cuckoos Could Be Coming “To A Town Near You”
By El Hunt
Get Even More From Bustle — Sign Up For The Newsletter