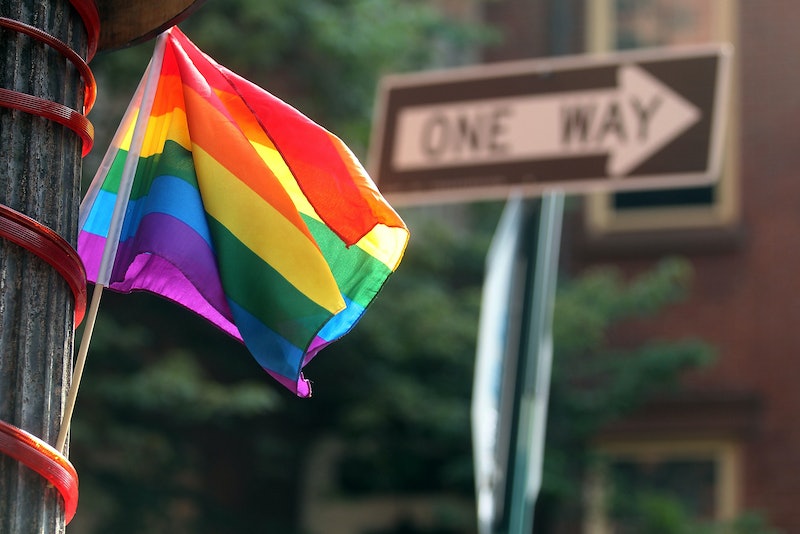 On Saturday, activists from southern Texas' Rio Grande Valley had a message to share about President Trump's stance on immigration. Performing in front of an existing structure in Brownsville of the Lone Star State, drag queens protested the border wall to raise funds for members of the LGBTQ community who were seeking asylum in the U.S. According to NBC News, Beatrix Lestrange, who is a self-titled "dragtavist", was the organizer behind the "No Border Wall Drag Protest."

"The vision was to perform in front of this wall and project our beauty and our glamour, and our empowerment against this symbol that stands for hate, racism, and xenophobia," Lestrange told NBC News. "All of these things that aren’t really happening in our community."

Proceeds gathered from the protest would go to nonprofit groups such as the Refugee and Immigrant Center for Education and Legal Services and Organizacion Latina de Trans en Texas, according to The Hill.

Another protester, Sabino Ponce Jr., told NBC News that he joined the demonstration at the Brownsville border structure for more personal reasons as his father was an undocumented migrant. "I know his struggle coming over and how he built himself from the ground up with his third grade education," Ponce Jr. told NBC News. He added that his father's case was not unique as countless others were seeking to enter the United States for better living conditions.

In photos taken by reporter Reynaldo Leanos Jr., activists could be seen donning elaborate dresses as they danced by the border wall. Here's one of those photos.

Reporter Maria Hinojosa tweeted a video of another activist dancing in front of and collecting tips from an audience in Brownsville on Saturday.

Journalist Nadia Tamez-Robledo also tweeted a video clip of a protester named Lolita LeVey wrapping up a dance performance in front of the border wall as the attendees cheered on. "Bye, everybody," Tamez-Robledo tweeted, "[I] gotta dedicate my life to Lolita LeVey. Yes, that's the existing border wall behind her."

According to NBC News, activists performed along to songs like Lady Gaga's "Born This Way" while wearing high heels, a variety of wigs, and intricate dresses. Those who attended the protest included academics like Jorge Trujillo, a professor at University of Texas Rio Grande Valley. "We need to continue that movement and let people never forget that there has never been a more perfect opportunity to be Valley proud," Trujillo told NBC News.

The protest comes more than a week after President Donald Trump declared a national emergency in mid-February over his demand for a border wall between the United States and Mexico. In a last-ditch attempt to build the structure, which Democrats have pushed back against, Trump's national emergency redirects money from other federal agencies toward funding for the wall.

Lestrange told NBC News that other LGBTQ communities in the country should come forward with their own style of protest given the urgency of the issue. "Do it now, because tomorrow is too late," she said.

The activist added that the plight of LGBTQ asylum seekers left her distraught. "They’re fleeing homophobia, transphobia, violence, trauma," Lestrange said, "only to come to the doorsteps of our country and encounter more of that.