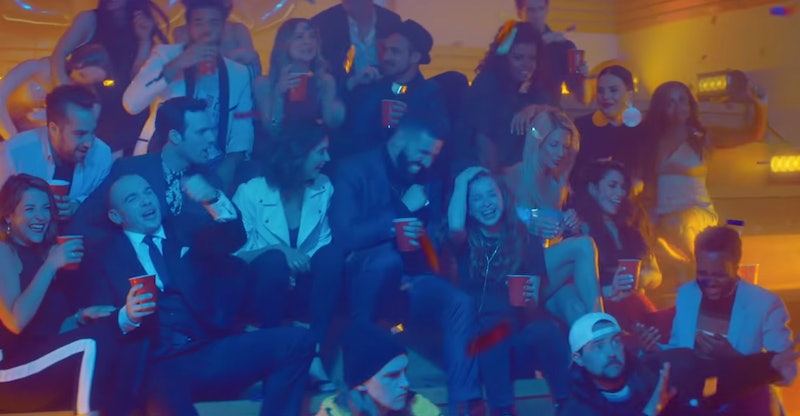 If you've been dying to see the original Degrassi cast reunite, you're going to love Drake's latest music video. On Wednesday night, Drake released the video for "I'm Upset," and it's starring almost every single one of his former costars, including Degrassi Community School itself. Basically, this video is like what would happen if Jimmy had become a famous rapper (and also probably never gotten shot) and went to his high school reunion, and it's every bit as perfect as you'd hope it would be.

In the video, Drake wakes up after receiving a reminder that his high school reunion is that day on his phone. He's shopping for a suit to wear when the first Degrassi cameo happens — Spinner himself walks into the store and the two of them head off to Degrassi for their reunion. At that point, we get to see everyone show up, and that means everyone. Not only is the entire main cast there, but so are Kevin Smith and Jason Mewes. "I'm Upset" definitely leaves no Degrassi stone unturned — and it's the exact kind of fan service you'd hope for when it comes to catching up with the former students of your favorite Canadian TV high school.

It's kind of mind-blowing how Drake managed to pull this off, but then again, this is Drake. And it's impossible to describe how epic this video is in words, so you're just going to have to watch it for yourself — probably more than once, because it's that good.

It's impossible to say what the best part of this video is. It's exciting enough to see the cast back in action, but there's so much happening. Manny, Marco, and Paige arrive together, proving that this friendship has lasted 11 years after graduation. Mr. Simpson buys weed from Mewes and Smith. And then, of course, there's Rick — the one who shot Jimmy in the school shooting, paralyzing him — showing up and then getting chased out of the reunion. This is music video gold, people.

And speaking of Rick, if you're wondering why he was resurrected from the dead and JT was not, there actually seems to be a funny story behind it. According to a screenshot posted on Twitter, Drake apparently revealed in an Instagram comment that Ryan Cooley thought that the video was a scam. If this screenshot is legit, Cooley is probably feeling a lot of FOMO at this point now that he knows it was 100 percent real.

But what will really get you in the feelings about this music video is the end credits, which are set to the Degrassi theme song and show all the cast members who were in the video, along with clips of them as teens in the original show. If you're crying a little at this point, you're not the only one.

It seems like the cast is just as excited about this video as fans are. Miriam McDonald shared a photo of her and Drake together on the set, thanking him for bringing everyone back together for the sake of this magical video:

And Lauren Collins shared a behind the scenes photo of her and some of the cast from the filming of the music video, including 11 of her former costars. How beautiful is this?

More like this
Selena + Chef Season 4 Was Filmed At Hannah Montana's Old Malibu House
By Jake Viswanath
An Ultimate Guide To The Music Of 'Rap Sh!t'
By Brad Witter
Why Eurovision 2023's Host City Won’t Be Revealed For A While Yet
By Sam Ramsden and Rachel Mantock
How Lady Gaga & Adele Are Closer To The EGOT All Of A Sudden
By Jake Viswanath
Get Even More From Bustle — Sign Up For The Newsletter