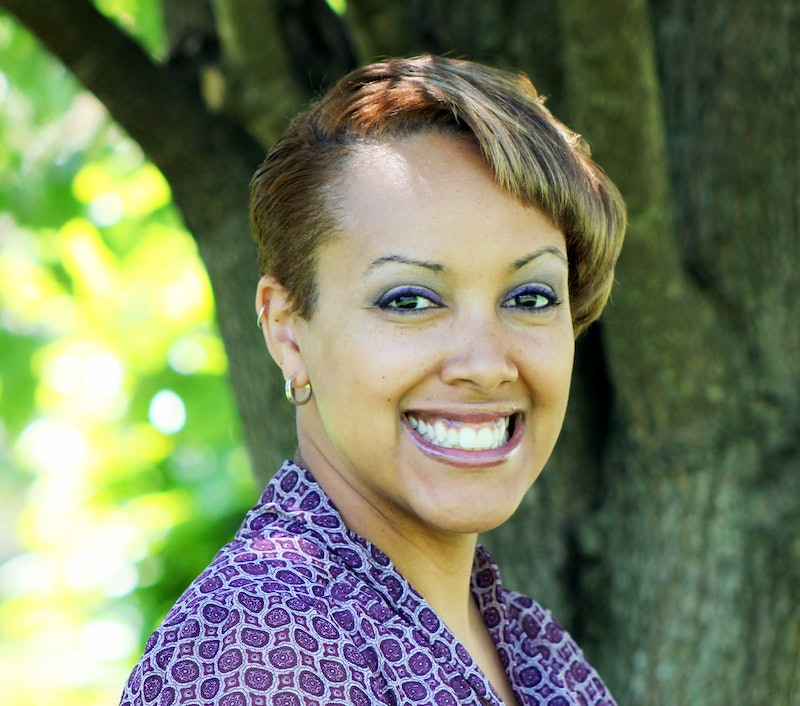 A nation divided, politics, and oh yeah — zombies. I know what you're thinking, but this novel is not about the current White House administration. Dread Nation by Justina Ireland, out April 2018 from Balzer + Bray, is a novel set in post-Reconstruction America... with one big twist: the entire country is beset by a plague of zombies that have risen from Civil War battlefields. The novel isn't out until next year, but Bustle has the exclusive cover reveal below — and it is stunning.

"I wrote [Dread Nation] many moons ago, after I read Pride and Prejudice and Zombies," Justina Ireland tells Bustle. "Sure, you have well-to-do white women fighting, but it didn't seem realistic. It would’ve been black women fighting in the streets."

That train of thought led her to an idea — what about a school for black and Native girls who train in the art of combat to kill the swarms of undead that populate their country? That idea proved to be the beginning of this book.

Ireland, who is a prominent advocate for diversity in publishing, looked to current events to further inspire her story. "I knew it needed something else," she says. "It was after Ferguson and Mike Brown. I knew something was missing. In the 1880s, black people would’ve been treated like Second Class citizens."

Thus, her protagonist Jane McKeen was born. Jane is biracial; she was born to a rich, white Southern mother, but she's still not immune to the racism that pervades her country.

"It’s about zombies and racism," Ireland says. "Jane grows up on a plantation. There’s a law that when you’re 12, you have to go to combat school. It’s only for Negro and Native kids. All Jane wants to do is finish her education and go home. She doesn’t want to be part of society... but then people start going missing, and she's caught in the middle of this conspiracy. Like Odysseus, everything goes wrong, and everything conspires against her."

History isn't dead, and neither are the zombies in Dread Nation. Like we see in Lin-Manuel Miranda's take on Alexander Hamilton, the events of our past can speak to current events. Ireland says, "Hamilton works because it adds enough historical anachronisms that a modern readership can understand it. With Jane, you know who she is just by reading her dialogue. Her nemesis/reluctant friend is very much of the time period. She’s always dressed nice. She represents the true 1880s. Jane exists outside of that timeline and historical period. That's the reader’s entry point."

Ireland describes Dread Nation as a novel about friendship, survival, racism, and zombies. Yeah — it sounds pretty freakin' awesome. Bustle is proud to present the cover for Dread Nation, out in 2018:

"I had so much input in the cover, designed by David Curtis," Ireland says. "My editor asked me to send him Victorian photos of black people. Florida State has a portraiture archive of black people in the period clothes. The next step was choosing a model who looked most like Jane. After that, we wanted to use an American flag that was time period appropriate."

They also put a lot of thought into Jane's choice of weapon: a sickle. "I thought about what would have been available at the time," Ireland says. "She uses a hand-held sickle and that requires a lot of closeness, and that’s badass. A gun would’ve been clunky and it would be a mess to reload all the time. She does have a six shooter, but it’s not her preferred weapon."