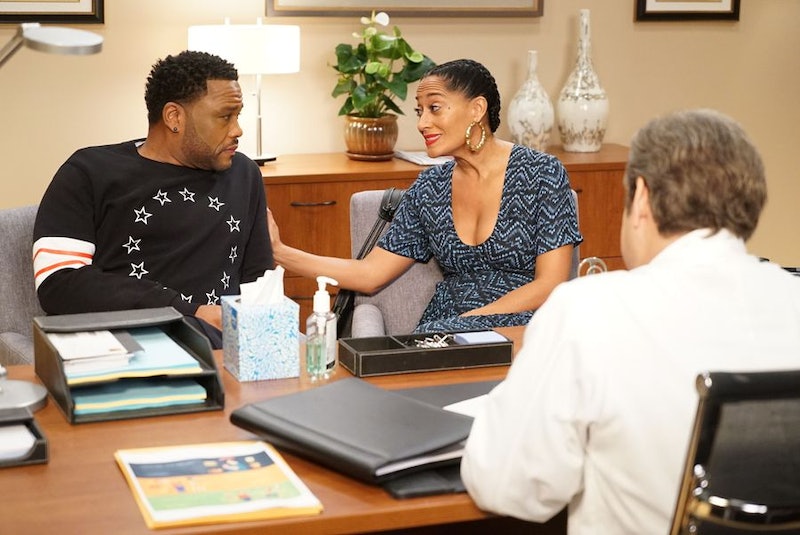 Everything is not holly or jolly on the ABC comedy's Dec. 12 midseason finale, because Dre is diagnosed with type 2 diabetes on black-ish. Naturally, this is difficult news for Dre, who has an aversion to pretty much every healthy habit imaginable. But things get even worse when Bow's overzealous approach to helping Dre with his medical treatment leads Dre to the other extreme. With the help of a "wellness" documentary that claims you can "cure" any disease without medication, the patriarch starts to believe that he can manage his illness just by fasting.

Of course, starving himself isn't a viable method of dealing with a chronic illness, and Dre passes out spectacularly at his work holiday party. When Bow asks him, "Have you thought about your family or your kids?" Dre responds that he only ever thinks about himself.

Dre's insecurities about becoming someone who has to deal with daily health issues like measuring his blood sugar, making time to exercise, and taking daily medication spurs him into a fantasy world where none of those things are necessary. He has a dream where, in a parody of It's a Wonderful Life, Dre sees how his family would be affected by his death. After a few days, they've moved on to "New Daddy," Rick Fox, and generally don't seem to miss the old one. After that nightmare, Dre realizes that he doesn't want to miss out on seeing his five kids grow up because of manageable health issues.

This combination of low blood sugar and paranoia makes Dre take his health more seriously, realizing that because he has money and a support system behind him, managing diabetes actually won't change his life all that drastically. Interestingly, these scenes featuring Dre addressing his health are likely informed by the fact that star Anthony Anderson has the disease as well. Anderson told The Los Angeles Times in 2013 that he has had to learn new habits in order to keep control over it. "I didn't make as drastic changes as I needed to," Anderson said about the early stages of his diagnosis. But a family tragedy changed his mind. "I watched my dad slowly die from this disease, and I vowed never to let that happen to my wife and children," the actor said. So, like Dre, he had to alter his routine in order to stay as healthy as possible.

The episode's opening animation points out that realities like food deserts and health care disparity mean that black Americans have a higher risk of developing type 2 diabetes than white Americans, which is backed up by the National Center for Biotechnology Information. And this episode goes a long way towards demystifying that experience. In the end, the viewer is left with the impression that diabetes is a lot more serious than jokes about sugary treats, but that it's not an insurmountable problem or one that's a sign of moral failure. Yes, Dre had some bad health habits, but this isn't his fault nor is it something that will ruin his life. That's a necessary point to make about a chronic illness like this one that affects 30 million Americans, per Diabetes.org.

Unfortunately, this otherwise important episode doesn't give Bow much to do. As in several previous Season 4 episodes, she's Dre's sounding board. But since she is a doctor, this storyline was a chance to hear more from her, and as the wife of someone dealing with a new diagnosis, it would have been interesting to hear what her emotional journey was like. How does she feel about potentially becoming Dre's caretaker? Maybe she's the one who needed the It's a Wonderful Life sequence, where she reckoned with her own desire to have a "perfect" partner before renewing her commitment to helping Dre overcome this hurdle.

But that issue aside, the midseason finale is another strong example of black-ish's mission to make serious problems disproportionately affecting the black community seem less daunting and more universal.