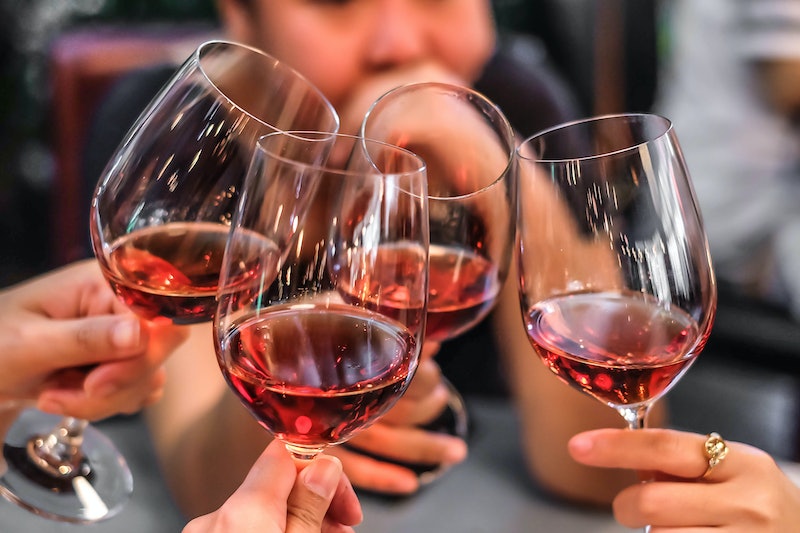 How many of us learned to enjoy a glass of wine with dinner, or one or two glasses winding down on the weekend? Despite the widely-held belief that red wine, in particular, delivers antioxidants, a new study has found that a potential downside to wine, even in moderation. Drinking one bottle of wine — around four glasses — a week seems pretty conservative when alcohol intake is concerned, but a new study published in BMC Public Health attempted to isolate the cancer risk of alcohol intake, and found that one bottle of wine a week seems to raise cancer risks similarly to smoking 10 cigarettes a week. However, experts have responded to the study with concern, saying that it's too simplistic and that people might misinterpret the results in overly general ways.

The study wanted to try and calculate the "absolute increase in lifetime cancer risk" that could come from one bottle of wine a week versus ten cigarettes per week, and used calculations involving the entire population of the UK. The results? One bottle of wine a week for non-smoking men was associated with a one percent rise in overall cancer risk, and a 1.4 percent rise for non-smoking women. They calculated that alongside cigarette use and lifetime cancer diagnosis to get an equivalent number.

A single bottle of wine, the scientists wrote, "is associated with a significant increased absolute lifetime risk of alcohol-related cancers in women, driven largely by breast cancer. Drinking one bottle of wine per week is associated with an increase in absolute lifetime risk of cancer equivalent to smoking 10 cigarettes a week for women, and five for men."

That seems like a very dramatic result. But is one bottle of wine a week seriously the same for cancer risk in women as 10 cigarettes? The key to understanding the numbers here — and why experts are skeptical about drawing equivalencies between a bottle of wine and cigarettes — is in the phrase "absolute cancer risk." This risk has to do with cancer as a whole — without any nuance or variables involved.

"This study is not saying that drinking alcohol in moderation is in any way equivalent to smoking," the scientists who wrote the study explained. "Smoking kills up to two-thirds of its users, and cancer is just one of the many serious health consequences. This study purely addresses cancer risk in isolation." And that means it's an abstract idea, not a solid reality. Cancer can be caused by a huge amount of elements, including genetics and exposure to environmental toxins. The study deliberately didn't address where the cancer may have come from, what age it developed or how serious it was; it grouped everybody with cancer together.

And that's a very simplistic way of doing things. “Comparing the cancer risks associated with a specific number of cigarettes to a bottle of wine is quite simplistic and may send the wrong message," oncologist Dr Francisco Esteva of Langone Perlmutter Cancer Center, told HuffPost. His concern was that the scientists, in their big-picture analysis, had left out all the other health risks associated with smoking too. The body's reaction to smoking and drinking is very individual, and determined by many different factors, many of which can't be controlled — and drawing a straight comparison between drinking and smoking may not be as helpful as it seems.

The scientists themselves stated that they're not actually saying that drinking a bottle of alcohol a week carries the same risk of cancer as smoking does; they were attempting to draw attention to the potential health risks of alcohol consumption to help the public understand that heavy drinking can cause serious problems. "It is well established that heavy drinking is linked to cancer of the mouth, throat, voice box, gullet, bowel, liver and breast. Yet, in contrast to smoking, this is not widely understood by the public," they noted in a press release about this study.

As a way of getting the message across about excessive alcohol consumption and cancer risk, the "one bottle equals ten cigarettes" idea might be shocking enough to be helpful. However, it shouldn't be taken as a blanket statement about the risks of drinking for everybody in the population. It's likely that you can enjoy a drink or two of wine per week in peace.