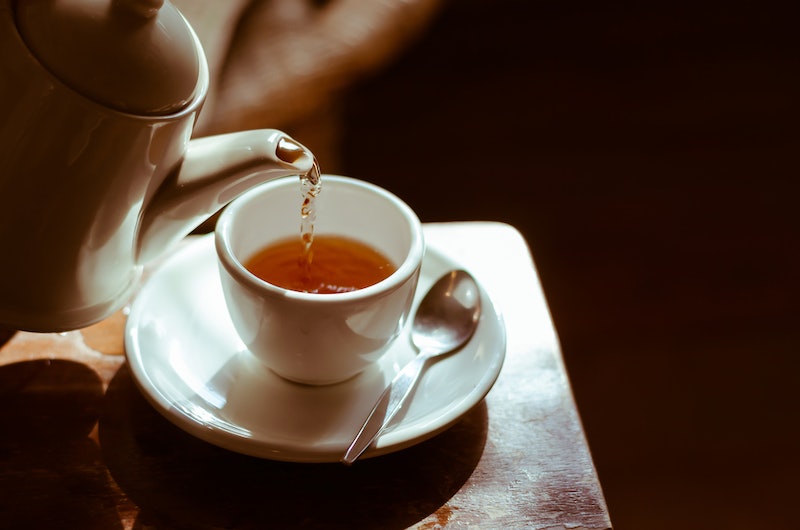 It might not surprise you to know that around 25,000 cups of tea are consumed every second around the world, according to data presented at the 2018 Global Dubai Tea Forum. But some new research may give you pause if you take your tea extra hot. A recent study found that people who drink piping hot tea may have an increased risk for esophageal cancer.

The study, published in The International Journal of Cancer, focused on the tea drinking habits of over 50,000 Iranians, aged 40 to 75 years old. The research built upon previous studies indicating a relationship between consuming hot tea temperatures and potential risk of esophageal cancer. The primary risk factors for esophageal cancer include tobacco and alcohol use, though the American Cancer Society also notes that consuming very hot beverages may heighten the risk for the squamous cell type that’s responsible for the cancer, potentially as a result of “long-term damage to the cells lining the esophagus from the hot liquids.” The organization also notes that while esophageal cancer contributes to roughly 1 percent of all diagnosed cancers in the U.S., it is much more common in other countries including Iran, India, and northern China.

In the most recent study, tea temperatures were measured objectively (the drink’s actual temperature) and subjectively (the temperature the participant preferred to take their tea). Over the course of the study, 317 cases of the cancer were diagnosed. Factors including hotter tea temperature, the individual’s subjective preference for “very hot” tea, and shorter durations between pouring the tea and drinking it were all linked with heightened risk for esophageal cancer. When compared to participants who drank less than 700 ml of tea (about two cups) per day at lower temperatures, the individuals who drank more than that amount per day at temperatures beyond 140 degrees Fahrenheit (60 degrees Celsius) were linked to roughly a 90 percent increase in cancer risk.

"According to our report, drinking very hot tea can increase the risk of esophageal cancer, and it is therefore advisable to wait until hot beverages cool down before drinking," Dr. Farhad Islami, the study's lead author, told CNN.

Considering how tea is the most widely consumed drink in the world after water, the study’s results flag some important concerns regarding just how people consume the drink. And while the U.S. doesn’t even crack the top 20 countries that drink the most tea (top honor goes to Paraguay), the beverage is still in almost 80 percent of households across the country, according to the Tea Association of the U.S.A.

Though the results pinpoint a notable pattern among hot tea drinkers, they by no means imply causation. Several other factors, like genetics and environmental factors, may contribute to the development of esophageal cancer, and more research is necessary to better understand the relationship between consuming hot tea and risk for this type of cancer.

The results may also extend beyond tea, noted Dr. Bing Hu, Associate Professor of Oral and Dental Health Research at the University of Plymouth, in a statement on Science Media Centre. "Any hot foods/liquid can induce cell damages, it is not only linked with tea," said Dr. Hu, who was not involved with the study. "It is well known that temperatures higher than 60 degrees are harmful for keratinocytes – which produce keratin, the key structural protein that makes up the outer layer of human skin.”

Andrew Sharrocks, Professor of Molecular Biology at the University of Manchester, added in the same statement that, “It is advisable ... to allow drinks to cool before drinking them, although adding cold milk as is often the case in Western societies would produce the same effect. Indeed, the incidence of this type of cancer is a lot lower in Western countries, which may partly reflect these drinking habits.”

While the study isn't definitive, it's probably better to err on the safe side. Patience is a virtue here — let your tea cool down before you take another sip.