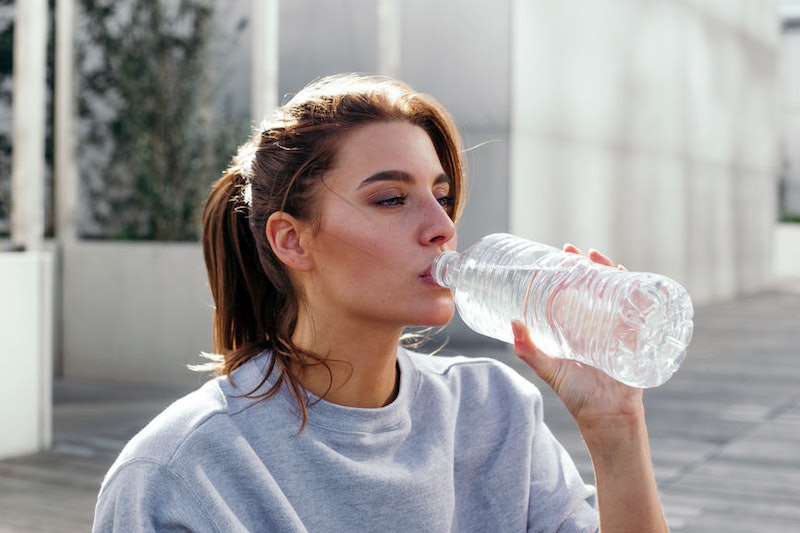 Most of us are familiar with the sensation: you got in the house at 6 p.m., turned on Netflix at half past, and suddenly it's 2 in the morning and you need to be up in five hours. But the grogginess of the following day might not just be down to tiredness, according to a new study — in fact, your lack of sleep might have left you dehydrated, meaning that drinking more water might help you feel less tired. Hear that? You're not doomed to a day of pounding espressos and struggling to focus on your computer screen, night owls! Relief could be a litre or two of Evian away.

Researchers at Penn State University looked into the impact of inadequate sleep on hydration, surveying over 20,000 adults in both the U.S. and China for a study published in the journal Sleep. Each participant provided a urine sample in order to determine their level of hydration, while answering questions about their sleeping habits. The findings of the study? Those who slept for only six hours had "significantly more concentrated urine" than those who got eight hours of sleep, while their chances of being "inadequately hydrated" ranged from 16 to 59 per cent higher than those in the eight hours camp.

The results of the study, according to the researchers, come down to hormones: more specifically, a hormone named vasopressin, which controls the hydration levels of the body. Crucially, it's released both at night, when you're asleep, and during the day; as a result, the hours of sleep you get have a significant impact on the amount of vasopressin released.

Study author Asher Rosinger, an assistant professor of biobehavioural health at Penn State, explained, "Vasopressin is released both more quickly and later on in the sleep cycle." He added, "So, if you're waking up earlier, you might miss that window in which more of the hormone is released, causing a disruption in the body's hydration."

"If you are only getting six hours of sleep a night, it can affect your hydration status," Rosinger concluded. "This study suggests that if you're not getting enough sleep, and you feel bad or tired the next day, drink extra water." A solution that doesn't necessitate giving up your 2 a.m. YouTube beauty tutorial marathons, then! (Although honestly, you probably should.)

The impact of dehydration on cognitive function is well established at this point — earlier this year, researchers from the Georgia Institute of Technology concluded that even a mild degree of dehydration can impact your attention span, your coordination, and more. "The key finding was that dehydration impaired cognitive performance," study co-author Mindy Millard-Stafford told Newsweek. "Specifically, we found tasks involving executive function (complex thinking, applying logic, etc.), attention, and motor coordination appear to be more impaired."

And a 2015 study carried out by the Natural Hydration Council (which, as an association of bottled water producers, does have a vested interest in the outcome) found that one in five visits to the GP were the result of "tiredness and fatigue." In one tenth of those cases, doctors deemed the primary cause of tiredness to be dehydration.

To sum up? There's a pretty strong chance that your drowsy brain isn't just the result of a bad night's sleep — in fact, it's down to the impact of that bad night's sleep on your levels of hydration. As a result, the crucial element to making it through a sleep-deprived work day might not be caffeine after all, but a generously-sized glass of water.

More like this
Deliveroo Is Selling Lotus Biscoff Cinnabons Now
By Darshita Goyal
This Psychological Effect Might Be Keeping You From Hitting Your Goals
By Lexi Inks
Got Brain Fog? Here Are The Best Supplements For Memory & Cognition
By Carolyn Steber
How To Shop Your Favourite Celebrities’ Closets On Depop
By Darshita Goyal
Get The Very Best Of Bustle/UK