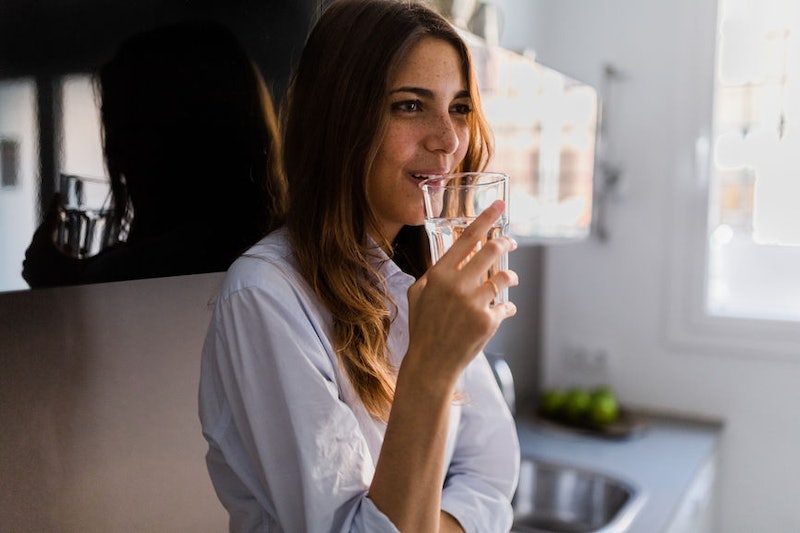 Dry January, the UK-based challenge to abstain from alcohol from an entire month, is approaching once again; if you're wondering whether to commit, here's another incentive for you. According to a new study, Dry January could improve your sleep, your skin, your energy levels, and more — and the benefits don't vanish when you start drinking again. Another enticing finding? Even if you don't quite manage to keep the entire month alcohol-free, you're still likely to reap some of the rewards.

The challenge also had a significant impact on participants' relationship with alcohol, according to the study. 80 per cent said they felt more in control of their drinking, while 76 per cent reported a better understanding of when and why they drink. And the changes continued into August: the participants' drinking days dropped from an average of 4.3 per week to 3.3, while the units consumed on each drinking day fell from an average of 8.6 to 7.1. The survey respondents reported being drunk less frequently too, from an average of 3.4 times a month before taking part in Dry January to 2.1 times a month after.

Dr Richard de Visser, reader in psychology at the University of Sussex and the study's lead author, said, "The simple act of taking a month off alcohol helps people drink less in the long term: by August people are reporting one extra dry day per week."

He added, "Interestingly, these changes in alcohol consumption have also been seen in the participants who didn't manage to stay alcohol-free for the whole month — although they are a bit smaller. This shows that there are real benefits to just trying to complete Dry January."

According to a YouGov poll carried out for Alcohol Change UK, the charity behind Dry January, one in 10 people in the UK are planning to take part in the challenge this year. Dr. Richard Piper, the charity's CEO, explained, "The brilliant thing about Dry January is that it's not really about January. Being alcohol-free for 31 days shows us that we don't need alcohol to have fun, to relax, to socialise. That means that for the rest of the year we are better able to make decisions about our drinking, and to avoid slipping into drinking more than we really want to."

"Many of us know about the health risks of alcohol — seven forms of cancer, liver disease, mental health problems — but we are often unaware that drinking less has more immediate benefits too," Dr. Piper said. Better skin, sounder sleep, more energy, and a happier bank account? Sounds pretty enticing to me.