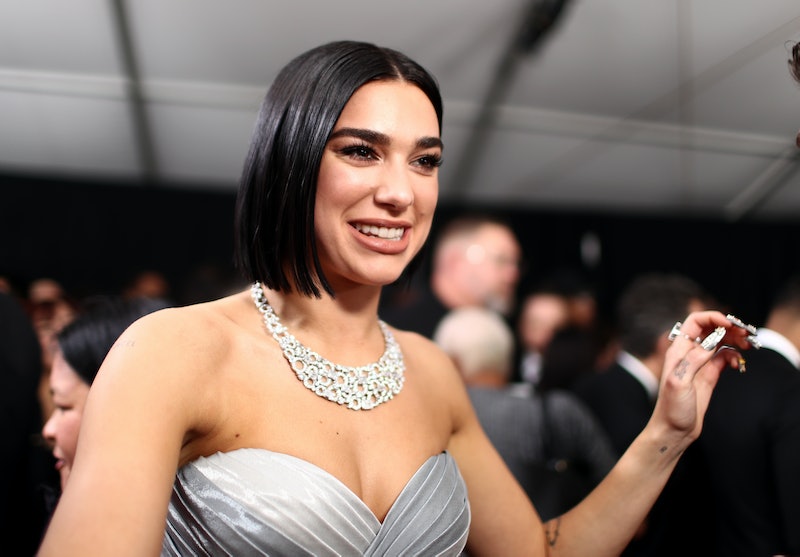 Dua Lipa is one of the biggest rising stars of our time, and her style choices and beauty looks have arguably been just as talked about as her music. Right from when the singer started out, she had always seemed interested in beauty (she created an iridescent lip gloss with Mac Cosmetics back in 2017), and she has always seemed excited to change up her look. So I guess it should come as no surprise that Dua Lipa has dyed her hair blonde, debuting her incredible transformation over on her Instagram page.

The star, who is known for her jet black short locks, took to the social media platform to show off her new look, which in Instagram pictures looks as though it is platinum blonde, with sections of black still lurking underneath. However, when she stepped out in New York with her boyfriend Anwar Hadid, her locks looked like more of a strawberry blonde colour.

The look was created for Dua by Nicola Clarke at John Frieda salons, with the help of stylists Anna Cofone and Shannon Gallacher. As a side note, Shannon has done my colour before and she is INSANELY good, so it is no surprise that she is Dua's go-to girl. All three hairstylists reposted Dua's new look, with Anna commenting: "We been keeping it under wraps," perhaps suggested Dua has been wearing a wig for her past few appearances, in order to hide the blonde until the big reveal.

In the caption for Dua's post (which, as of writing, already has over 200,000 likes) where she shared three snaps of her blonde tresses, she wrote: "A new era! Thank you for your patience. See you soon #DL2." While the singer was of course referencing a new era for her hair, she was also referring to her new music, which Billboard has explained we can expect very soon. They revealed that Dua has been in the studio with Nile Rodgers and Pharrell Williams while working on the album.

#DL2 (if we can assume that will be the new album's name) will be the first album released by Dua since her debut album in 2017. The self-titled album included some of her best known hits including New Rules and One Kiss.

Her new blonde hair reminds us how much fun Dua likes to have with beauty, something she told Glamour she likes to do with music videos in a 2017 interview:

"My beauty look really depends on what I want to put out there with the video. I try not to go too crazy with videos, makeup-wise, but I guess it all just depends on the mood of the track. I like playing around with looks and changing it up."

She also revealed she likes to get her beauty inspiration from places such as Instagram:

"I love Instagram – there are so many cool sources of inspiration and art on there. There are amazing beauty tutorials on there, for example."

"I especially freak out over Pat Mcgrath’s Instagram," she continued. "I just love looking at it with all the cool colours and everything she does. I try to recreate the looks for my live shows with all the glitter. It’s just such a good source of inspiration."