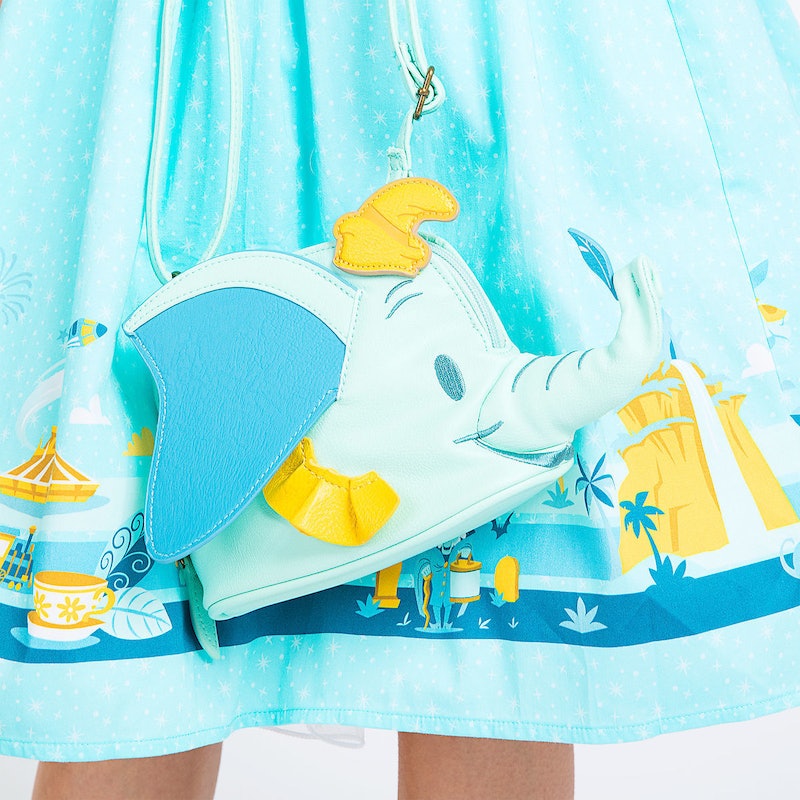 The next Disney live-action remake is on the way, and the Disney store is well prepared for its arrival. Dumbo will be released on March 29, and shopDisney is full of Dumbo merchandise for new fans and fans of the 1941 animated movie alike. There's even something for people who want to dress their baby up as Dumbo — hey, to each their own!

The live action Dumbo movie is directed by Tim Burton and features a computer generated flying baby elephant. The film also stars Colin Farrell, Eva Green, Danny DeVito, Michael Keaton, and Alan Arkin. A full-length trailer for the film was released back in November, and it's kind of heartbreaking, especially the look at Dumbo's mom being taken away.

The new Dumbo merch featured in shopDisney is not explicitly connected to the new film. Rather, it's part of the store's new Disney Wisdom Collection, which features "a new Disney character, inspirational film quote, and color every month." The first series of the collection is centered around Dumbo. (For February, you can look forward to a series all about Mushu from Mulan.)

While there aren't yet any products in the shop that are particular to the new film, perhaps those are coming soon. Either way, there is already plenty of Dumbo merch to go around, because in addition to the Wisdom Collection, there are a number of other items related to the animated film. Whether you want to relieve your youth spent watching the Disney movie or have a kid in your life who is excited for the newest take on the story, here's a look at what's available.

This month's wise quote come from Dumbo's Timothy Q. Mouse: ''The very things that held you down are going to carry you up and up and up!'' This mug is the "first in a series of 12 monthly collectible stackable mugs."

This journal, like all of the products in the collection, features the same quote as the mug above. If you happen to go through a notebook per month, then shopDisney has you covered this year.

Pins are a common Disney collector's item, and for the Wisdom Collection, shopDisney is also offering a special pennant to use to show off your pins.

This Dumbo tote bag comes in two sizes and is customizable, including changing the color and adding text to the bag.

Maybe you want all the throw pillow on your couch to be Disney ones, I don't know your life!

Is it a fun play purse for a little kid... or is it a fun real purse for you? Choice is yours.

You can check out more of shopDisney's Dumbo collection here, including a $9,500 "Jeweled Figurine." Yeah, maybe just stick to the notebook.