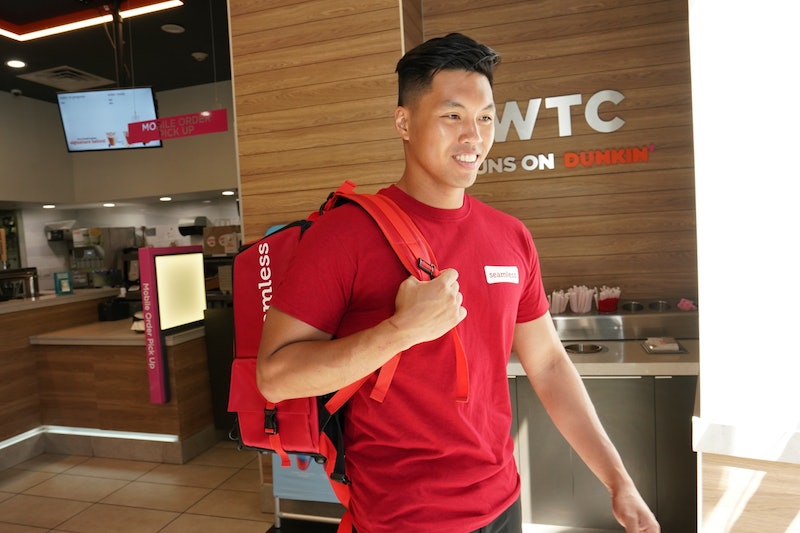 Indulging in a donut on a lazy Sunday morning in bed just got a whole lot easier. Announced Monday, Dunkin’ will start delivering through Grubhub, initially in New York and eventually rolling out nationwide. In other words, bed donuts for all!

Per a press release from Dunkin’, 400 locations throughout New York City’s five boroughs will start offering delivery through Seamless, Grubhub’s New York City brand. Once NYC had donut-ed itself silly, Grubhub will begin delivering Dunkin’ to locations in Boston, Chicago, and Philadelphia. Then, eventually, Dunkin’ will deliver from locations across the U.S., taking over our breakfast orders and digestive systems.

By the end of the year, Dunkin’ hopes to have delivery options available in one-third (more than 3,000) restaurant locations, as Stephanie Meltzer-Paul, Dunkin’ U.S. vice president of digital and loyalty marketing, tells Yahoo Finance. Per Meltzer-Paul, the company hopes to expand delivery services even further next year to more than 70% of Dunkin’s country-wide (about 6580 of Dunkin’s 9,400 locations).

While the rest of the country will have to wait a bit, Dunkin’ customers in NYC can partake in a special promotion in honor of the delivery service. Starting Monday, June 24 and running until Sunday, June 30, Seamless and Grubhub will offer New Yorkers free delivery Dunkin’ orders at select locations. You can get donuts delivered straight to your doorstep without having to leave your house. What a time to be alive!

When you order Dunkin’ through Seamless or Grubhub until Sunday, June 23, and enter the promo code DUNKINBIKE, you’ll be entered to win a free Dunkin’-themed bicycle. You can keep the Dunkin’ bike in your apartment, simply to stare at, never to ride, as you order donuts on your phone for the rest of forever, just as the pastry gods intended.

Before Monday’s rollout, Dunkin’ started testing delivery with Grubhub back in February. Per data from the test, average wait times have been under 15 minutes and the average fee for Dunkin’ delivery was below $5. Meltzer-Paul tells Yahoo Finance that average order sizes in test markets have been double the average ticket for in-store purchases, which makes sense. If you’re going to pay to have donuts delivered to your doorstep, might as well go buckwild and get the full baker’s dozen.

This isn’t Dunkin’s first foray into delivery. Currently, the coffee and donut chain has a partnership with delivery service DoorDash in select markets. As CNBC points out, those markets include parts of New York and New Jersey. While smaller than its competitors, DoorDash has the largest geographic reach of its fellow delivery apps, as it’s currently available in all 50 states. Despite the Grubhub news, according to Nation’s Restaurant News, Dunkin’ has “no plans to end that partnership at this time.”

Starting last year, you can order Dunkin’ Donuts through Alexa, provided you are a DD Perks Rewards member and have your account linked to your Amazon account. The feature had limited capabilities. So, unfortunately, you couldn’t just be like, “Alexa, gimme some donuts” and Dunkin’ would appear. Per a blog post from Dunkin’, one of the easier commands included, “Alexa, tell Dunkin’ Donuts to reorder my last saved favorite.” Then, Alexa would place an online order of whatever your last saved favorite was.

The Grubhub-Dunkin’ news comes at a time when fast food restaurants are competing for deliverability. As of late May 2019, McDonald’s delivery via Uber Eats is currently available at 9,000 of the franchise’s 14,000 location. After Monday’s announcement, Grubhub’s stock increased by 4%. Whether or not America runs on Dunkin' is up for debate, but America definitely runs on food ordered online and delivered to our doorsteps.