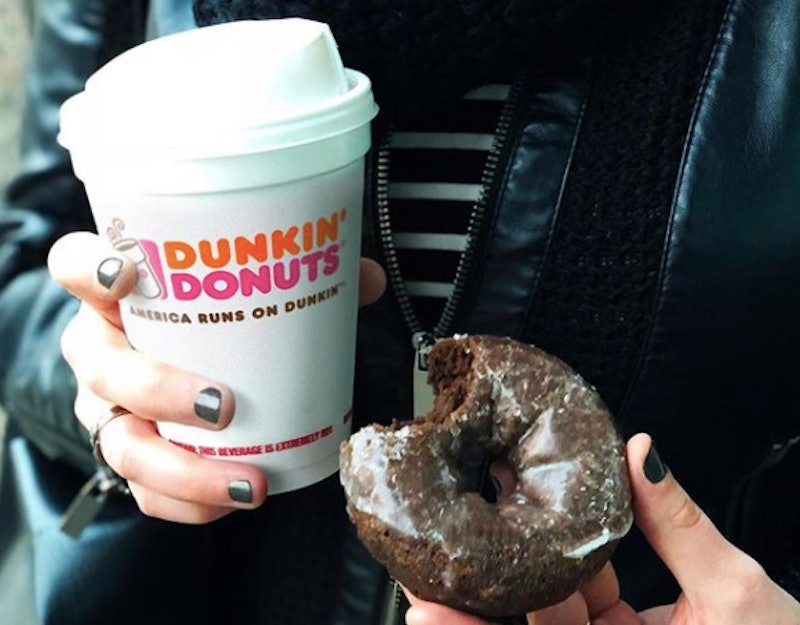 America may run on Dunkin', but Dunkin', among many other brands, has been running on some pretty unsustainable packaging. Thankfully, if all goes according to plan this won't be the case in the foreseeable future.

Dunkin' Donuts has announced plans to eliminate styrofoam cups, beginning spring of this year, with use completely ceasing by 2020, according to a press release on Feb. 8. The recognizable polystyrene coffee cups currently used by most locations in the US to serve hot beverages will be replaced with double-walled paperboard cups available in four sizes, paired with a re-closable lid. Paperboard cups are already used by most of the store's international locations.

According to Dunkin' Donuts' press release, the decision is reportedly part of a company-wide shift to more environmentally-mindful business practices; including a goal of having 80 percent of its packaging certified to the Sustainable Forestry Initiative's standard of renewable packaging. Other future objectives include complete elimination of artificial dyes from products, building energy-efficient storefronts, and an eventual partnership with the Rainforest Alliance to source coffee beans.

This is not the company's first attempt to forgo the foam. According to the Dunkin' Donuts' 2012 Corporate and Social Responsibility report, aspirations to find a renewable alternative to the iconic foam cup had hoped to be revealed within three years of the report's release. Unforeseen barriers regarding customers' reception to new lids may have delayed the process, suggested an email a Dunkin' Donuts spokesperson sent to HuffPost.

Dunkin' Donuts also shared in their press release what the new cups will look like.

Dunkin' Donuts has been spent more than a decade seeking new, more environmentally-conscious ways to sell its products, according to the press release. Beginning in 2005, the company has used a coffee cup carrier composed exclusively of recycled materials. In 2009 they further incorporated recycled paper materials into items like napkins and the iconic Box O' Joe, and in the last four years alone the company has made strides in terms of reducing the amount of waste produced. Most notably, by the end of this coming summer Dunkin' will have completely transitioned from an older version of cold beverage lids to those made with recyclable polypropylene.

It is a well-established fact that plastic products make up a significant amount of the waste found in landfills. This proportion is thought to be as high as 30 percent of all waste that ends up in the areas. But, styrofoam also poses a significant risk to the country's waterways. According to a 2009 report by environmental advocacy group Clean Water Action, polystyrene was found to be the most prevalent form of beach debris littered along forty three sites in Orange County. It photodegrades, meaning it breaks down through exposure to light, but never fully disappears (as opposed to biodegradation, in which living organisms consume excess material in the environment). When this occurs in marine environments, the minuscule pieces of plastic material can be mistaken as food by animals, resulting in injury and death.

Plus, it's not exclusively animals consuming it.

According to the International Agency for Research on Cancer, as well as the National Toxicology Program, recent research suggests the material could be carcinogenic (cancer-causing). The USDA advises against heating foam containers — like, you know, with scalding hot coffee — as chemicals in plastic to be absorbed by whatever food product it is holding. It is for this reason a number of areas around the country, including Washington, DC and many of its surrounding suburbs, have banned the material, according to the Baltimore Sun.

With other fast food companies making similar changes (McDonald's announced last month an effort to switch to entirely sustainable packaging by 2025), it will be interesting to see whether these changes result in observable progress when it comes to pollution over the next few decades. Dunkin' Donuts is making a step in the right direction — hopefully their loyal customer base will be on board with it, too.