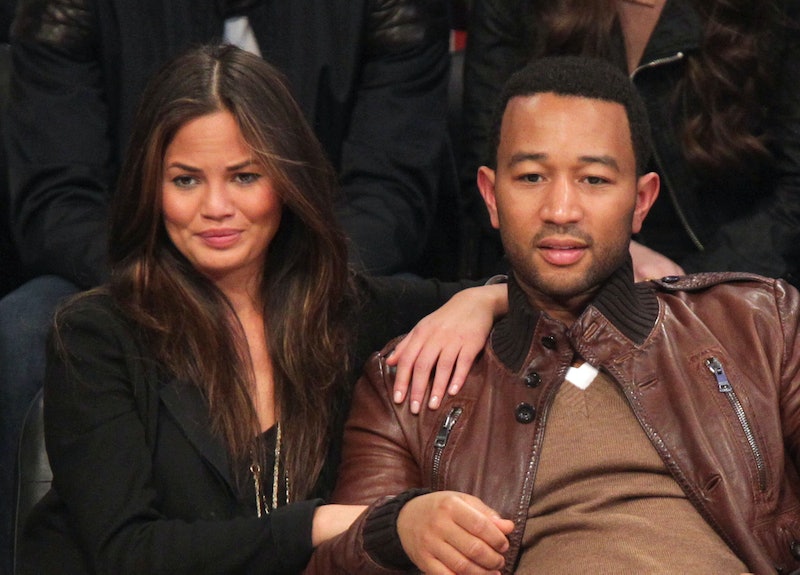 Chrissy Teigen and John Legend's followers expect them to write the most hilarious tweets and Instagram captions, but they achieved their latest comedic achievement without even saying a word. They actually became a meme in real life. Miami Heat player Dwyane Wade fell on Chrissy Teigen and John Legend on Tuesday night, creating a hilarious meme that's actually applicable for many different situations.

As fans know, Teigen has never shied away from making fun of herself. In fact, she's usually the first one to make a joke at her own expense. So, of course, It's not surprising that the cookbook author tweeted out the photo of the NBA player in their laps, taken by a Miami Herald photographer. Then, Twitter did its thing as per usual. Her followers responded with hysterical edits and humorous captions to turn the picture into countless memes.

This photo instantly became the meme that keeps on giving. Teigen herself described the picture as "a renaissance painting" in that same tweet. Legend agreed and responded with some crying-laughing emojis.

Plus, one of her followers tweeted about the moment, writing, "@DwyaneWade so hyped he ran into @chrissyteigen and spilled her drink all over her." The model quoted that tweet and added, "It was an honor!!!"

After the incident, Legend tweeted a video to show his followers that (some of) his spilled drink did survive the interruption. He tweeted, "Still got my drank." That's all that matters. But most importantly, they are now a part of a popular meme, which is worth more than any drink.

This moment can be used for many different scenarios, as proven below.

This would definitely stand out among the other holiday cards on the fridge. It would actually make sense to keep this one on display all year round. The tagline "a little heat during the winter" is just too good.

Everyone can relate to this one. This is the perfect embodiment of the temptation to skip out on early morning plans.

One Twitter user was inspired by Teigen's description of the moment as a "renaissance painting" by photoshopping the moment in with a painting.

Another fan took Teigen's wording to the next level and reimagined the moment as a painting. This needs to be framed and hung up in the Legend household.

Teigen and Legend's sour reactions could represent how former significant others and bosses could feel if you find success — bitter.

This wouldn't be a photo to describe a successful deodorant by any means. However, it could be a good "before" photo for a before-and-after advertisement. This photo could easily depict a need for deodorant.

When The Lemonade Is Sour

The drink spill adds a special effect to this photo. Legend's face is how anyone would react to a super sour drink.