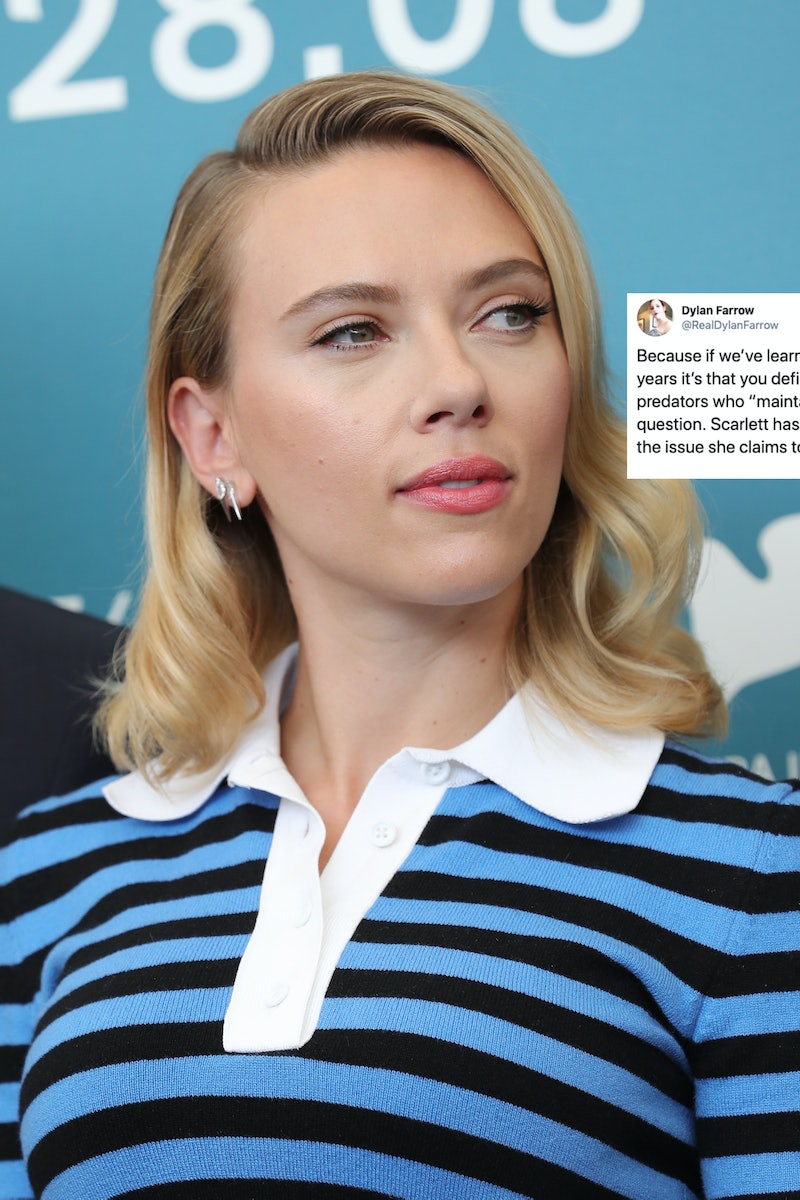 Shortly after Scarlett Johansson spoke out in defense of her frequent collaborator Woody Allen, the woman who originally alleged sexual misconduct against the director has spoken out. On Twitter on Sept. 4, Dylan Farrow responded to Scarlett Johansson's recent comments on Woody Allen with a powerful and concise statement.

In case you missed it, Johansson recently came under fire for a Hollywood Reporter interview, published on Sept. 4, in which she gave a statement in support of Allen. “How do I feel about Woody Allen?” she said, “I believe him, and I would work with him anytime.” She also said that she sees the director — whom she worked with on Match Point and Vicky Cristina Barcelona — when she can and that she has discussed the issue with him. "I have been very direct with him, and he's very direct with me. He maintains his innocence, and I believe him."

Seeing as though Allen's adoptive daughter, Farrow, alleged he sexually abused her in the past (allegations that he has repeatedly denied), Johansson's comments definitely raised eyebrows online and sparked backlash. Joining in that conversation, Farrow retweeted an article from the Los Angeles Times, which covered Johansson's comments, and wrote a very direct statement:

"Because if we’ve learned anything from the past two years it’s that you definitely should believe male predators who 'maintain their innocence' without question. Scarlett has a long way to go in understanding the issue she claims to champion."

(Bustle reached out to Johansson's rep regarding the backlash, as well as Farrow's tweet, but did not receive an immediate response.)

Just like Farrow tweeted, it sounds as though Johansson, who has long been a supporter of the #MeToo movement, might need to take a step back in order to understand exactly what her support of Allen could mean to others, especially those such as Farrow.

As previously mentioned, in 2014, for an op-ed for The New York Times, Farrow accused Allen of molesting her as a child, an allegation that she first made back in 1993. At the time, the matter was brought forth to a judge, who ruled that any evidence of abuse was "inconclusive," according to Slate. Allen has denied the claims on multiple occasions, doing so in a 60 Minutes interview in 1992 and, once more, in an op-ed for the NYT in 2014 in response to Farrow's own op-ed piece for the publication.

The allegations against Allen were brought up again in light of the #MeToo movement, which sparked up in late 2017. As a result of the movement, and Farrow's more recent interview with CBS News in January 2018 about the allegations, many actors who had worked with the director, including Greta Gerwig and Timothée Chalamet, spoke out to say that they regretted working with him. Amazon subsequently canceled the release of Allen's newest films (the director, in response, sued the studio for canceling the deal, in February).

Johansson has yet to respond to either the public scrutiny of her comments about Allen or Farrow's own response.